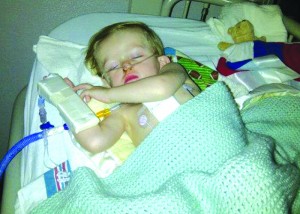 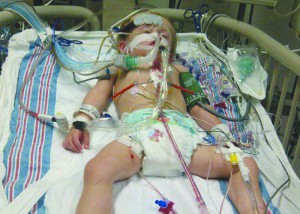 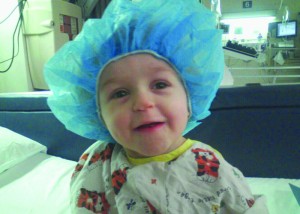 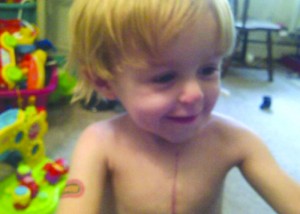 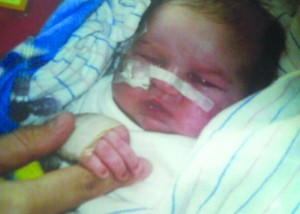 Joshua after he was born. 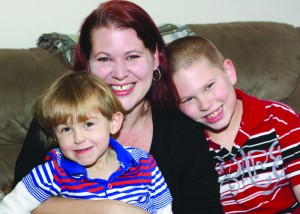 Sarah, with Joshua and Daniel, says every day with her boys is a blessing.

By Jenny Johnson – “Tomorrow is a gift not a given,” said Sarah Price mother of four-year old Joshua who has Congenital Heart Defect and is in heart failure. Joshua is awaiting his fourth open- heart surgery and will require open-heart surgeries every two to five years. So far he has had nine surgeries. Joshua’s medical diagnosis read like a medical textbook. He has Tetrology of Fallot which consists of four different heart defects.  His aortic valve is in the wrong place, he has a hole in his heart between two ventricles, the right side of his heart has thickened from working so hard and he has the most severe form of pulmonary stenosis, the narrowing of the pulmonary valve. He also has Failure to Thrive, central apnea, hypopnea, Stage 2 kidney reflux, an inferior and swiveled right kidney, umbilical hernia, absence seizures and hearing loss. He has also had two strokes. “When you look at him you would not know. He is the happiest most playful boy you know,” she said. And you can’t tell by visiting him. Joshua and his eight-year old brother Daniel, who is in second grade at Walker-Winter Elementary School, love Harry Potter and spend hours playing and wrestling. Daniel gives Joshua piggy-back rides as Joshua laughs and their toy area is full of Disney themed toys. Sarah is thankful for every day she is able to see his smiling face and watch her two boys together. Joshua’s health problems were detected when Sarah was pregnant. “I was happy I found out when he was in utero because I had a plan,” she said. He was born at Oakwood Hospital and Sarah was able to see him for about two  minutes before he was transferred to Children’s Hospital in Detroit.  Joshua was 6 lbs 8oz and was born on April 28, 2009. It would be 36 hours before Sarah saw him again. She had a cesarean -section  and left the hospital earlier than she was supposed to and got into a car accident on the way to see Joshua. When she finally got to the hospital she couldn’t hold him but was able to change his diaper. This was no small feat with all of the tubes and wires attached to him. But after she successfully changed him she thought, “ I can do this and I wasn’t afraid anymore,” she said. Joshua was two weeks old the first time she held him. That milestone made it easier to learn how to do things like feed him through his tube. When he left the hospital he was tube fed and the tube had to be put through his nose and into his stomach without hitting his lungs. Today Joshua can eat regularly and really likes fruits and vegetables. “He is a good non-picky eater,” she said. He is also very social and friendly. He loves riding the bus and going to preschool school at Stottlemyer in Westland. He has been in the program there since he was 18 months old. Because his hearing loss is progressing Sarah is trying to decide which kindergarten setting will benefit Joshua best. He is almost fluent in American Sign Language and is working on reading lips.

Surgery days
Joshua has undergone nine surgeries in his short life. Each one is a test in hope and perserverance. “It is blind faith.  You are handing your child over and you know they are going to stop your child’s heart and that is all you think about,” Sarah said. “You try not to think about it in the waiting room and you can’t stop thinking about what they are doing to your baby.” “You go on autopilot before going to surgery,” she said. Sarah reads him a story about children going in to surgery and she is always in the recovery room so he doesn’t get anxiety. For each surgery Sarah’s mom comes in from Florida and her sister and brother-in-law take turns at the hospital with her. “I am very lucky for the amount of support I have,” she said. This time she will also have her boyfriend, Jason, to lean on when Joshua undergoes his next open-heart surgery. There is also a network of heart moms on Facebook. “No one else knows what it is like to hand your child over,” she said. “My grandma went and visited after the last surgery and cried because she hated seeing him like that. You see tubes, wires and blood but you also see a fighter, someone who is going to come back stronger than ever.” He has had two strokes and almost died but he keeps coming back and fighting, she said. “He has a strong will to live.” Surgeries can last anywhere from five to eleven hours. His second open-heart surgery was supposed to be five hours but lasted 11 because they had to put him on a heart lung machine. After surgery they keep Joshua sedated while his is intibated. But the last time, 16 hours after surgery he stood up in the crib and reached for his mom. “Watching him go through the pain you would do anything for him to not have to,” she said. The first few days after surgery are spent watching the monitors. “That is your hospital life,” she said. Even though she doesn’t have a medical degree no one knows Joshua better than Sarah. “They extabate him too early and he always has complications,” she said.  After his second heart surgery he had complications and Sarah said to the nurse, “Something isn’t right. I know my kid. Both of his lungs had collapsed and he had blood pouring around his heart. It was terrifying,” she said. After his third surgery he had a stroke. “He was two and we were at the Ronald McDonald House. My mom and sister were there and they paged us,” she said. Joshua didn’t recognize his mom. He has to relearn many things but has made an amazing recovery.  They are usually in the hospital for a couple of weeks with each heart surgery. Sarah stays at the Ronald McDonald House connected to the hospital. “It is such a godsend. You have a place to sleep, eat and take a shower,” she said. To give back Sarah volunteers to serve dinners at the Ronald McDonald house. Last month he had to have an outpatient surgery for his ears and when they got to the room with the anesthesia he signed to his mom  “I don’t like.” Now they let Sarah go back with him and hold him and the mask while he falls asleep. 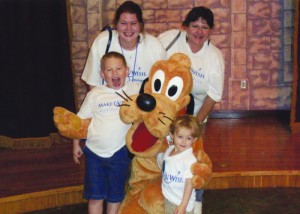 On their Make-a-Wish trip to Florida Sarah, her mom and the boys got to meet many Disney characters.

Make-a-Wish
In November 2012 Joshua was granted his Make-a-Wish. Sarah, her mom and the two boys went to Florida and visited Disney World and Universal Studios. Joshua and Daniel got to meet their favorite, Harry Potter. They stayed at Give the Kids the World with other families with life threatening and terminal illnesses. Once a week they have special activities for the families like Christmas Day, ice cream for breakfast and they get to meet a host of Disney characters. Sarah said the trip was bittersweet.  “When they gave you the tour they said most children don’t live five years after,” she said. The best part about the trip was that everyone accepted everyone and no one stared at kids in wheelchairs or with feeding tubes. The also have things like wheelchair accessible pools so the sick children get to participate in every activity. The boys came home with great memories, lots of photos and special souvenirs.

Congenital Heart Defect Awareness
Feb. 7-14 is Congenital Heart Defect Week. CHDs are the number one birth defect and affect 1 in 100 births in the United States. More than 1,700 babies a year in Michigan are born with heart defects. “We always petition the governors and mayors to recognize CHD week,” Sarah said. Gov. Snyder signed a resolution as did the City of Wayne. Right now a group of CHD parents are trying to get a bill passed for newborn pulse ox check. This is a device that wraps around a newborn’s toe and measures their oxygen level.  Anything less than 89 requires more testing. “Sometimes doctors hear a heart murmur and sometimes the baby is blue but sometimes not,” Sarah said. But the pulse ox would detect a possible problem. There are 36 states that currently do this test. CHDs kill more children than all childhood cancers combined. “Yet there is little awareness. Where is our St. Jude’s?” Sarah asks. “Many people are unaware of CHDs and research and funding devoted to CHDs is grossly inadequate. Of every dollar the government spends on medical funding, only a fraction of a penny is directed toward congenital heart defect research.” Sarah’s hope is for more awareness and research and less invasive ways to treat CHD. “They are making strives all the time and you can only hope one day things will be better,” she said. Joshua is not a candidate for a heart lung transplant so Sarah is hoping for medical advancements to heal his current heart. In the meantime Sarah said, “I try to think of all the advances he is making and hold on to that. Joshua did receive a tissue donation for his heart through the Gift of Life. It was used during one of his heart repair surgeries and came from a little boy named Jamil who died the previous year and they saved his tissue. “Joshua has a little piece of someone else,” she said. Every year they celebrate his heartaversary- the day he received his donation. “It makes you stronger. You never know how strong you are until you have to be,” she said. “I am just doing what every other parent does.”