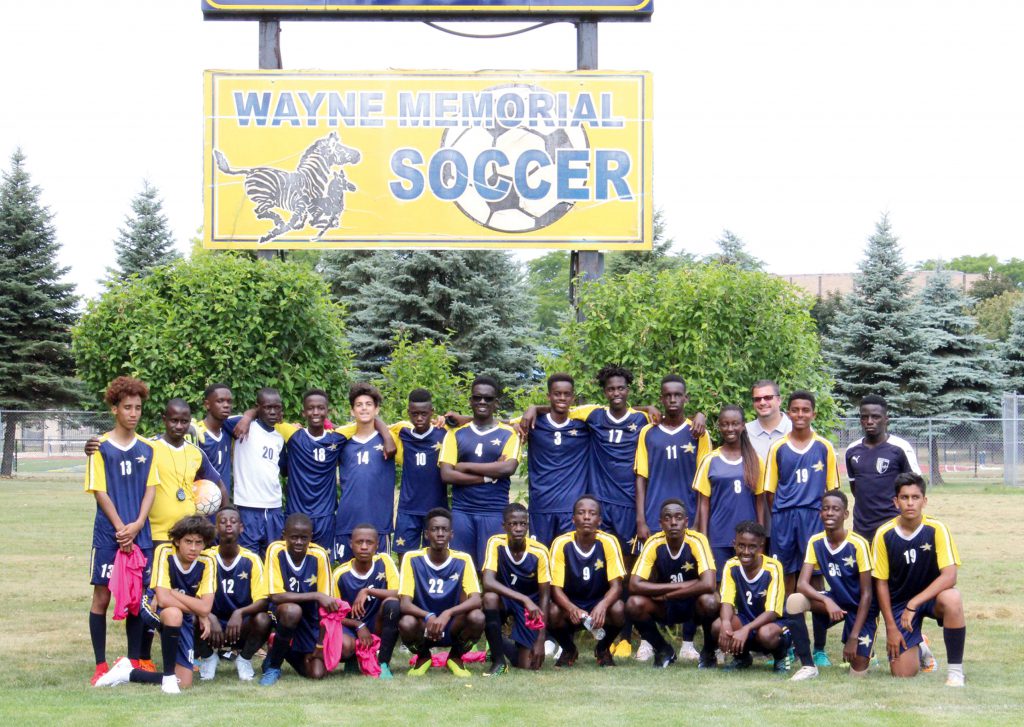 Matt Arnett recently returned to Wayne with the Uganda, Africa soccer team he coaches through Rising Star Ministries, a ministry he co-founded with his wife, Brecka.

By Carolyn Marnon – Matt Arnett lived in Wayne until he was 22-years old. He left Wayne for Rochester in 2005 when he took a job as a TV producer for the Detroit Pistons, eventually winning an Emmy award. He recently returned to Wayne with the Uganda, Africa soccer team he coaches through Rising Star Ministries, a ministry he co-founded with his wife.
“It was exciting,” says Matt about his visit. “I love coming home. I have been traveling to Uganda for 10 years telling people about my home, so it was a surreal experience to be able to bring our team. I loved every bit of it.” With plane rides totaling 20 hours, plus adding in layovers, the trip from Uganda to Dubai to Chicago to Detroit took approximately 35 hours for the Rising Star team.
In 2008, Matt and his Nebraskan wife, Brecka, moved to Uganda to work with a child sponsorship organization. “While there, we began using soccer as an outreach and started an afterschool tutoring and reading program. The program awarded kids by allowing them to play soccer if they completed goals educationally,” commented Matt in an email. “My wife had the idea for many years to start a sports and education program. She thought maybe it could be done in the inner city, but then while in Uganda, we felt the calling was to keep it going there.” Rising Star Ministries was born.
Matt and Brecka lived in Uganda from 2008-2010 before making the move to live there full-time in May 2015 with their two children. “There is poor infrastructure there, lack of hospitals and poor schools. Electricity and water are not always available. Security is not good, so we, being from a western culture, are targets for thieves and robbers.”
As Executive Director of Rising Star Ministries, Matt is the head of the organization. His position requires doing a little of everything including managing staff, leading training sessions, teaching, implementing systems, coaching soccer and most recently, arranging a trip to the U.S. for the Ugandan soccer team he coaches. Matt was a member of the first soccer team at Wayne Memorial High School back in the 1990s.
No matter where they grow up, kids typically have the same dreams. They want to grow up to be professional athletes, doctors, lawyers and other “dream” careers, says Matt. The only difference between kids in the U.S. and Uganda appears to be their access to some things. Ugandan kids may not be able to play video games as much or go to the mall to hang out. Instead, they hang out with their friends by going to the soccer field.
Ugandan children come to Rising Star from the neighboring community; some come as far as four miles away by walking. According to the Rising Star website, 60% of primary-aged kids in Uganda are illiterate. Because all government testing materials are in English, Rising Star puts a major emphasis on reading in their educational programs.
The Ugandan soccer players from Rising Star that came on this trip were very excited about coming to the U.S. and about everything they experienced while here. “They were excited to play and meet teams from all over the world. We met teams from Norway, Brazil, Canada, Alaska, Hawaii and more,” says Matt.
Their first U.S. stop was in Wayne where they practiced on the field at WMHS before their first game against the Michigan Tigers Futbol Club in Ann Arbor. During their time in the U.S., the team also traveled to Minneapolis (Minnesota), Omaha (Nebraska) and Dallas (Texas). “In Minneapolis, we played in the Schwan’s USA Cup which is the largest soccer tournament in the western hemisphere. We reached the semifinals in two tournaments played there. In other cities, we played against local teams,” wrote Matt. With a successful U.S. soccer tour behind them, the team eagerly awaits making the trip back next summer.
Most of the team had never traveled to the U.S. before. They had the chance to go to the Mall of America, tour the Big House in Ann Arbor, visit the African-American History Museum in Detroit, view the animals at the Omaha Zoo, just to name a few exciting things.
Rising Star Ministries help children in Uganda grow spiritually, academically and physically in a safe and caring environment. The Arnett’s will begin a new web series this month on life as a missionary. If you would like to help Rising Star Ministries by making a donation or just want more information, visit the webpage at www.risingstarministries.com