Bud Hillyard volunteered for the Wayne Lions for 50 years.

By Courtney Conover – If you live and work here in Wayne, then you can most likely picture in your mind’s eye how the northwest intersection of Wayne Road and Michigan Avenue in Downtown Wayne looks right now.
But in the early 50s, the main drag, as it was easily referred to, looked quite different back then.
Just ask Bud Hillyard, a resident of Wayne for 72 years. He remembers all too well.
High School History
As a member of the first class to both attend and graduate from Wayne Memorial High School, Hillyard’s school days were quite different than those of present day students. “We’d hang out at Chums restaurant, across from St Mary’s on Michigan Avenue,” remembers Hillyard, who worked in the school cafeteria. “Kids didn’t carry worries they have today, it was really nice.”
“O’Brien Drug Store was where the dental office is now; Feisters Restaurant resided where McDonald’s sits; Chase bank was formerly A.S. Poole [a mechanic shop] and Gulf gas station and car dealership; and, finally, there was an S.S. Kresge where Designer Warehouse is today…it had a nice counter where people used to sit and enjoy a fountain Coke,” recalls Hillyard, 80.
Make no mistake about it, Hillyard knows Wayne.
He also knows the importance of dedication and philanthropy.
For 50 years Hillyard, who moved to Wayne with his family during WWII when he was just eight years old, put his heart and soul into serving the community as a member of the Wayne Lions Club, an organization that he characterizes as a 100-percent club.
“We do not take any administrative costs,” says Hillyard. “All of the money we raise goes directly to the charities.”
And those charities are aplenty.
Through the years, the Wayne Lions Club has taken multiple charities under their wing, including the Penrickton Center for the Blind and Leader Dogs for the Blind. The club also funds three yearly scholarships for deserving students at Wayne Memorial High School, John Glenn High School, and William D. Ford Career-Technical Center. There was even a time when the Wayne Lions Club paid for the eye examinations and eye glasses for Wayne-Westland Community Schools students who didn’t have the money for the services.
“[We did this because] nurses would notify parents that their kids needed glasses, but parents couldn’t afford them,” recalls Hillyard. “I remember a time when there were half a dozen blind patients at Eloise [hospital], and we brought them incidentals, too. We did that for years.”
Hillyard is quick to recognize that the Wayne Lions Club couldn’t have done all this on its own and that the community has played an integral part in supporting the club’s efforts, particularly its on-going white canes campaign, which solicits donations and create awareness for the blind. (The club also sells candy canes at Northside Hardware during Christmas time.)
“Wayne and Westland residents have been very good to the Lions over the years,” he maintains.
Hillyard is quite passionate about community service, yes; but he admits that his decision to join the Wayne Lions Club was actually influenced by his then profession.
“I had just left the Jaycees,” explains Hillyard. “I decided to join the Lions because they meet at night – and the Rotary held lunch meetings, which I couldn’t attend.  I worked with autos, so I would have needed to go home and shower before attending one of those meetings.”
Hillyard, who worked with cars his entire life, took over the Wayne business established by his father. Built in 1947, Hillyard & Strader was a two-bay gas station located on Michigan Avenue at Winifred. Hillyard owned the station from 1975 through 1999. (The station now possesses a new name and is under different ownership.)
“It wasn’t an easy life, but the best thing about it was the people. I saw a lot of people grow up over the years…kids became adults who now have families of their own,” says Hillyard, who has three adult children and five grandchildren with his wife of 60 years.
Although Hillyard has retired from the Lions Club, he will remain active as a member of the Wayne Housing Commission and the Zoning Board of Appeals.
Says Hillyard, “I’ve lived here [in Wayne] and have made a good living…you have to give back to your community.”
The Wayne Lions Club is excited about welcoming new members. Contact John Goci at (734) 637-1430 for more information. 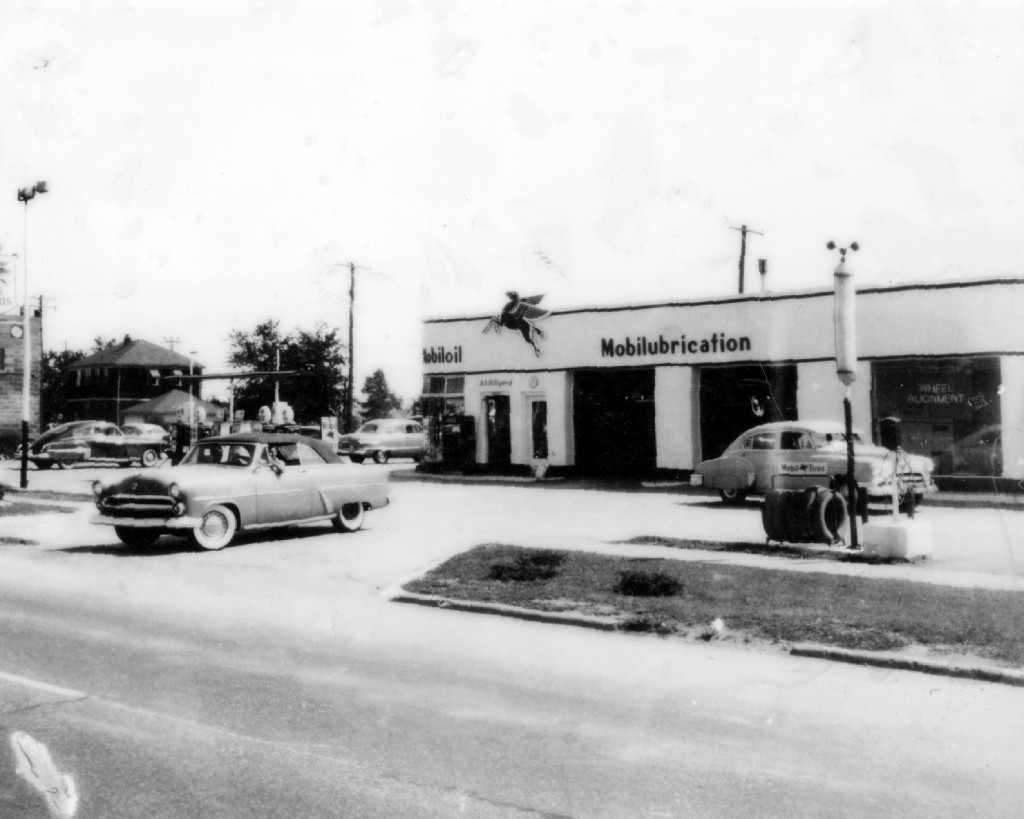 Bud use to own Hillyard’s Mobile service station at Winifed and E. Michigan Avenue.

You can help the Scarecrows return to Downtown