He’s Got a Rock and Roll Heart 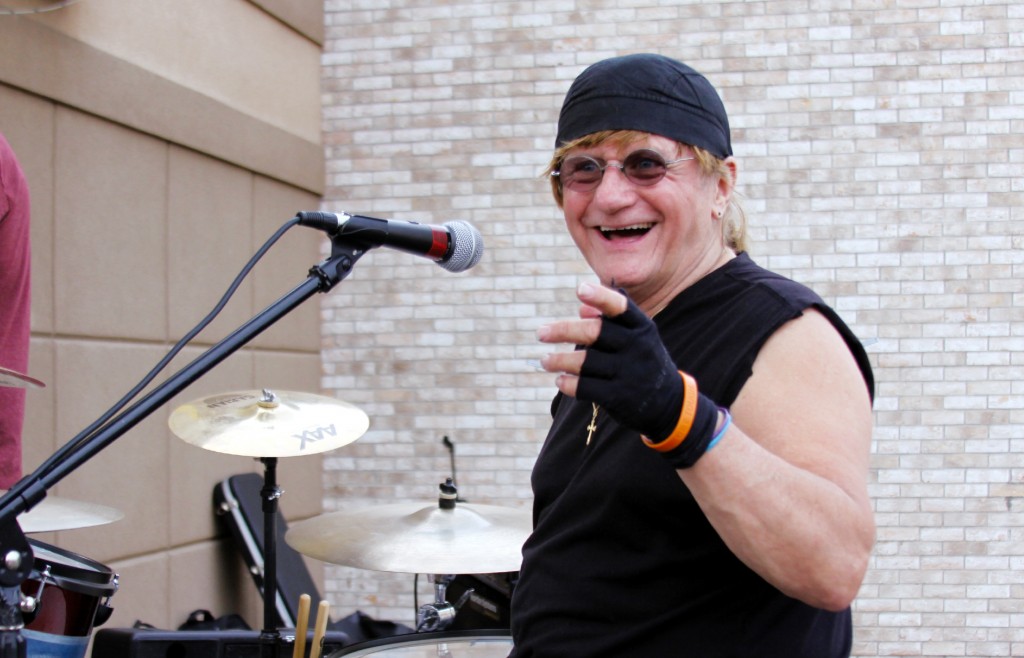 By Courtney Conover – “If I keeled over tomorrow, I’d like to do it performing,” says self-taught drummer Tim Cosher, whose career highlights include playing with the likes of Mel Tillis, Eddie Rabbitt, and The Kingston Trio.
But Cosher’s love affair with performing music is anything but new. As the son of a musician who jammed during the big band era, instruments – and the sounds they make – have been an integral part of Cosher’s life for as long as he can remember. Cosher was born and raised in the City of Wayne, he attended St. Mary’s Catholic School back when it was K-12, and possesses an extraordinary knack for regaling stories of Wayne during much simpler times.
Here, Cosher, who heads the local rock band TC & The Katz, divulges to The Wayne Dispatch how this city has served as the canvas upon which he has created a unique and gratifying career in music…

TWD: I’ve heard that your family and this city go way back. Just how deep do your roots go…
COSHER: My family has been here since World War II, they all worked at the war plant at the time. We’re originally from Cadillac [Michigan], and I used to go back and forth. Eventually, I stayed here.

TWD: And you’re a musician! What genre of music and instruments do you play?
COSHER: I play drums, trombone, trumpet, and whatever else. My father played in the Big Band era, so I had to learn how to play the trumpet. Growing up, I was taught all types of music, and my dad taught me how to read drum lines. We played a lot by ear back then.

TWD: So, tell me, did you find music, or did it find you?
COSHER: I’ve basically been a musician pretty much since…forever. I started playing the trumpet when I was about five. My dad would go on the road – and I wanted to play drums – but he wouldn’t allow it. My mother found me a drum set at a garage sale, and I kept the drums in a coal bin so my dad wouldn’t see them. He would come home, and my mom would say, ‘Make sure those drums are in the coal bin,’ and I’d [hurry up], sit at the foot of the stairs, pick up my trumpet, and start playing it…and then my dad would walk through the door [see me with my trumpet] and go, “That’s my boy!” But little did he know…

TWD: Ha! That’s the best story ever! Now let’s switch gears a bit and talk about your band. You currently lead a band called TC & The Katz, but your journey to get to this point has been an interesting one…
COSHER:  Our first band – and the first job we played – happened when were in the eighth grade. We played at the Wayne Rec., which is now Wayne’s City Hall on Wayne Road – they held Friday night dances for teens back then – and I made five dollars. We played rock and whatever was current; like [Chuck Berry’s 1958 hit] “Johnny B. Goode.” And we called ourselves The Silvertones.
TWD: I bet the City of Wayne looked extremely different back then…
COSHER: Quick story: You know Northside Hardware, right? Well, back then it didn’t span down the block like it does now, and right next to Northside was a restaurant called The Northsider. The parents of our band’s saxophone player (Lenny Lieberman) owned that restaurant, and our band practiced on the roof.

TWD: Wow!  So what came next?
COSHER:  We all graduated high school and our band  became The Showmen – with the same saxophone, bass, and guitar players from The Silvertones – and we became old enough to drink, so we were playing all the lounges. We remained The Showmen for about 20 years before we all went our different ways, and I opened my own music store here in Wayne, TC’s Music Emporium and Coffee House, which I ran with my partner, [the late] Tommy Sparks while still working my nine-to-five job in property management. And I eventually got burned out. But we were way ahead of our time. And then we became TC & The Katz…

TWD: There’s often an interesting story behind how a band acquires its name. How did you discover yours?
COSHER: There was a cartoon on TV called Felix the Cat….so instead of using C-A-T…when I had the girls with me, we were called The Chicks and the Cats, back in the day. But I decided that the cats are anybody who would come in here and play…so, they’re players; they’re cats. They’re cool cats. But I decided to spell it with a K.

TWD: Name an artist who has inspired you, and why?
COSHER: As a drummer, [the late] Gene Krupa was my idol. He did all the stuff for Frank Sinatra…I would just listen to him and say, ‘Wow!’ He wasn’t a banger. He had style and was very relaxed. He just let it flow.

TWD: Describe the feeling you get when you perform live.
COSHER: I get chills. The best part is when you have a captive audience, and when they applaud…people don’t understand how many hours you practice just to do that show, which is astronomical.

TWD: So you’re scheduled to perform this summer at Wayne’s Concert in the Park series…
COSHER: Yes, on Wednesday, August 26, at 7:30 p.m., and this marks the third year we’ve been invited back to perform.  We may do some The Rolling Stones, Four Tops, The Beatles; you can expect good harmonies. We always put on a different show.

Wayne resident Courtney Conover is a mom of two, the wife of former Detroit Lions offensive lineman Scott Conover, and a certified yoga instructor. When she’s not on her yoga mat, she’s blogging at www.thebrowngirlwithlonghair.com, oversharing on Facebook at http://www.facebook.com/thebrowngirlwithlonghair, and hashtagging away on Instagram at https://instagram.com/mrscourtneyconover.