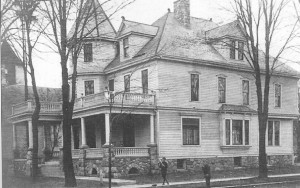 The Stellwagen house was located on Monroe Street and faced the Village Park. The third floor housed a ballroom.

Darlene Hawley – The first home built in our community was a log house built by George M. Johnson in 1824 and was used as his home as well as a tavern which could house and feed voyagers  traveling the old Sauk Trail or Chicago Road (Michigan Avenue) from Detroit westward toward Chicago.  From that simple log cabin, a village grew over the years into the City of Wayne and became home to you and me.  Over the years the style and architecture of our houses has changed remarkably.
Today, as you travel throughout our community shopping, running errands, visiting friends, attending church, enjoying our library and recreation center or any number of other ventures our daily lives require, you might be struck by the variety of neighborhoods and houses that fill our six square mile city.  From east to west and north to south you will find many different styles of homes filling many different neighborhoods.  If you could go back in time prior to the early 1960’s and visit our downtown area you would be amazed at the number of beautiful large old homes which were built in the late 1800’s and lined the streets of early Wayne.  Otis Warner, a well known carpenter in our village was responsible for building many of the buildings and houses in early Wayne. The Moore family owned a large home in downtown Wayne which in later years became Carpenter Hospital where many Wayneites were born or received health care.  The George H. Stellwagen house was located on Monroe Street facing the Village Park.  This huge home had a large porch with balcony over it and a third floor which held a ballroom.  Another house in town was actually three buildings that were combined to form a large home complete with picket fence.  The owner eventually had a local builder duplicate the house exactly as it was on property west of town. Unfortunately, most of these beautiful houses were lost to urban renewal in the 1960’s.  There are still a number of one and two story frame homes in our older neighborhoods which were built well over a hundred years ago.  You can observe these on streets north and south of the railroad tracks and along Wayne Road toward Van Born as well as in the neighborhoods east and west of Wayne Rd.
Many of our large subdivisions were built in the early 1940’s when there was a shortage of houses as people came to the Detroit area to work in the war plants and later as soldiers returned home from the war.  The subdivisions built between Fourth Street and Howe Road and Forest and Van Born were one of these subdivisions on the south side of the city.  I grew up there where many families with young children lived providing me and my siblings with many playmates. We all enjoyed the parks built for us and situated around the neighborhoods.  Another similar subdivision was built to the east between Venoy and Merriman south of the railroad tracks.  Later, in the 1950’s,  a large subdivision called Thinbark was built north west of downtown  Wayne, east of Newburgh and on the south side of Glenwood.  Most of the homes in these various subdivisions were frame or brick bungalows and all had about the same floor plans.
An older neighborhood in Wayne is located on the tree streets Chestnut, Elm and Ash )  and is located north of the river between Clark Street  and Fourth Street.  Here are custom built homes built primarily in the early to mid 1900s. They are a variety of architectural styles and sizes in this area.  The eastern section is called the Langworthy Subdivision after the Langworthy family who had a farm on this property long ago.   Some of the homes in this area are called “kit” homes or “mail order” homes.   In the early 1900’s a number of companies such as Sears and Roebuck, Montgomery Ward, Aladdin, Van Tine, and Lewis offered catalogues of homes which could be ordered and shipped in upwards of 30,000 pieces to your local train station.  It came with a 75 page instruction book which gave step by step directions on construction and a promise that “a man of average ability” could put the house together and have it ready for occupancy in 90 days.  It was like a giant puzzle where each piece was stamped with the company name and a number that identified where that piece belonged in the house.  These homes were sold and built all over our country.  Between 1908 and 1940, Sears alone sold 70,000 of these homes across the nation.  There are a number of these homes in Wayne. Several books have been written on how to find and identify these unique houses.
Another neighborhood of houses of a variety of styles and sizes is located south of the river, west of Elizabeth and north of Michigan Avenue.  It is a lovely neighborhood of tree lined streets and unique homes.  Besides all of the many styles of houses in the neighborhoods of our community, many families live in condominiums and apartments as well.  There is something for everyone in Wayne.     As Christmas approaches, it is a good opportunity to travel throughout the neighborhoods of our city and observe how many homeowners decorate their homes in the spirit of the holidays showing off their lovely houses.  Take a ride through our six square miles and enjoy the view this holiday season.   (Some information for this article taken from “The City of Wayne” by Valerie Latzman and “Michigan’s US-12 Heritage Trail”  by  Saborio and Kosky.)