How a Façade in Wayne has improved 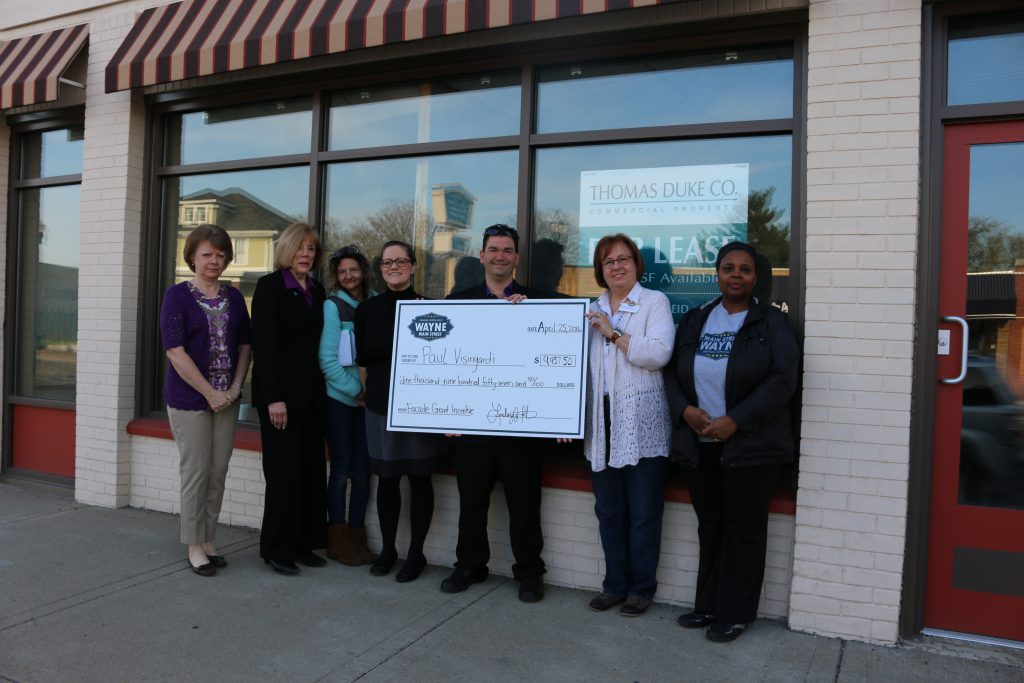 By Carolyn Marnon – The face of a building, especially the principal front that looks onto a street or open space, is called a façade.  Last month, Wayne Main Street held an Open House at 3023 S. Wayne Rd, a currently vacant space in Wayne owned by Paul Visingardi of Vizzy’s Pizza fame.  The purpose of the Open House was to present Paul with a check for $9,957.50 as the first recipient of the Wayne Main Street Façade Grant Incentive Program.
Wayne Main Street volunteers, Mayor Susan Rowe, several city council members, Adam Reid (Thomas Duke Co. realtor for the property), and other guests attended the Open House.  Lindsey Wooten, Executive Director of WMS, thanked everyone for coming.  She thanked Paul for making a $20,000 investment in his property and the community.
Paul bought the building in 2002. He had new windows and a door installed.  In 2014, he applied for and received Design Services, another program available through Wayne Main Street, that involves an architect coming out to view the building, talking to the owner about the owner’s vision for the space, and then preparing drawings on things the owner can do to improve the façade while still maintaining its historical integrity.  WMS can award these Design Services to up to three properties each year. The design Paul received suggested he put in new(er) windows and a door that would make the façade more historically accurate.  If he had not received the Façade Grant, Paul says he would not have made the changes. The 50% reimbursement is what convinced Paul he could make the changes.
The 1800 square feet building with its new facade is currently available for lease.  Paul is willing to work with potential tenants to help them get into the space. Adam, Paul’s realtor, commented, “We want to find a stable long term tenant. There are a number of ways we can help that include possible free rent and introductory rates…I think the space is best suited for retail, but is versatile enough to be used as an office as well. The community and city have both voiced that they would like to see a retail use go in the space, so that is where we started our marketing.”
The building has been painted, has new windows, a new door, new outdoor lights and looks much better than it did. Inside the space are murals of the beach and the Mackinac Bridge. Suggestions by attendees of the Open House included making the space a destination spot where people from outside Wayne could come to shop or dine, thus getting outsiders to also see what else Wayne has to offer.
The façade grant program was created to encourage private investment in historic facades in downtown Wayne by providing financial incentives.  Historically sensitive rehabilitation and dramatic improvement of facades will encourage good design that will serve as quality examples to preserve the architectural character that is distinctive to Wayne.  By improving the appearance of the building facades, the program helps to improve the economic viability of the downtown. 2015 was the first year the grant was offered.
The WMS Design Committee conceived of the grant program and researched different ways the grant could be implemented.  $10,000 was budgeted for the 2015 grant.  Wayne Main Street presents a workshop each year informing business and property owners in the WMS district what is available and how to go about applying for the grant.
The number of projects receiving grants in a fiscal year is based on the program budget, with a new funding cycle beginning January 1 of each year.  Grants are awarded on a first-approved, first-funded basis.  In 2016, $20,000 is available for distribution.
Only projects that are located within the Wayne Main Street district are eligible.  This program is a 50% reimbursement grant with a $10,000 maximum per project.
Wayne Main Street Façade Incentive Grant Guidelines and applications are available at the Wayne Main Street office (1 Town Square) or can be downloaded from the website: https://downtownwayne.org/business/grant/.
If you would like further information, contact Wayne Main Street Executive Director Lindsey Wooten at 734-629-6822 or visit during open office hours on Wednesdays from 12-3 p.m. and Thursdays from 4-7 p.m. at the Wayne Historical Museum.
If you would like further information about leasing the space, contact Adam Reid at 248-476-3700 or areid@thomasduke.com