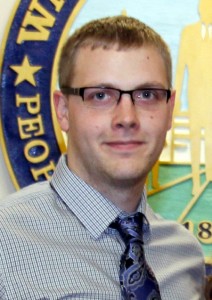 New council members sworn in
On December 16, two new council members were appointed by the current city council-Ryan Gabriel, 25, and Richard Sutton IV, 24.  Ryan fills the council seat that was vacant after Susan Rowe became mayor; he is a mortgage banker with Quicken Loans. Richard fills the council seat left by the resignation of James Hawley on December 2. Richard, who prefers to be called Terry, is a paramedic in the Beaumont Oakwood Hospital emergency room. Both appointments expire December 2017.

Adaptive use of current buildings
On Monday, January 11, join Wayne Main Street at 6:00 p.m. at the Wayne Fire Station as they host Elisabeth Knibbe, FAIA, Ann Arbor for “Reinventing Community Through Adaptive Use.”  The presentation uses completed projects in Detroit, Lansing, Jackson and Ypsilanti to illustrate the potential for the adaptive use of historic buildings to transform seemingly hopeless buildings into valuable community assets. In Detroit, examples range from small neighborhood retail buildings through abandoned offices to downtown office towers, each which found a new use. In Jackson and Ypsilanti, examples illustrate the potential to develop housing in large publically owned buildings that are no longer needed for their original uses. In Lansing, examples include an obsolete power station and long vacant downtown department store that were creatively repositioned through adaptive use.
The presentation considers not only the success of the architecture, but also the process including how architects envision the often hidden potential of obsolete buildings and how they assist the community and developers in realizing that potential.
The presentation is a Power Point presented by Lis Knibbe, an architect with over 35 years experience adapting historic buildings for new uses. She has worked with private and public developers to reposition small and large buildings creating housing, a hotel, offices and schools in formerly obsolete buildings. She is an expert in the use of historic preservation tax credits to help finance these projects. Her projects have won numerous state and national awards for historic preservation, and awards from the AIA Detroit and AIA Michigan.
The event is free.  All in the community are invited to attend.
Help develop a strategic plan for the schools
Wayne-Westland Community Schools is building a strategic plan that will be the stimulus for continued innovation and excellence in the district, both now and into the future. You are invited to a community meeting on Tuesday, January 19, 6:00 p.m. at Wayne City Hall to share your dreams for the future of the school district.  If you would like to become a member of the Strategic Planning Ad Hoc Advisory Committee or would just like to learn more,  you can contact Cheryl Watson or Sue Rawson at 734-419-2010.
Small business social media workshop
There will be a social media workshop for small businesses on Monday, February 8, at 6:00 p.m. at the Wayne Activity and Banquet Center on Sims St.  In this workshop, attendees will learn about small business marketing tips and trends, and how to incorporate the best social media  practices  for your business into an overall marketing strategy.  The workshop is $25 to attend.  Contact Lindsey Wooten with Wayne Main Street if you wish to attend.
Help of veterans needed
Several veterans who are graduates of Wayne Memorial High School want to have a Veteran’s display at the Wayne Historical Museum.  They are inviting veterans to loan an artifact from their service years and a short story about themselves.  Contact Ann Zimmerman at the museum if you can help.
Wayne police public meeting
The next community meeting with the Wayne Police is Thursday, January 28, at 7:00 p.m.  It will be at the Wayne Police Department on Michigan Avenue.  All residents are encouraged to attend.