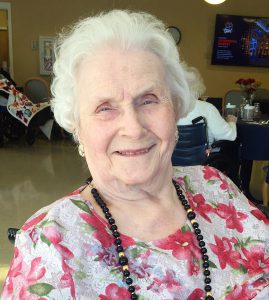 Mrs. Barnett worked at Countryside Dairy ice cream bar in her teen years, attended St. Mary’s of Wayne for eight years, and graduated from Wayne High School in 1944. During the war, she worked for Ford Motor Company on the assembly line. Connie and Bruce Barnett, of North Carolina, had a war-time romance and were married in 1945. After her husband’s death, she worked in the housekeeping department of Annapolis Hospital until her retirement.
After retirement Connie enjoyed traveling to Florida and North Carolina every year to visit relatives. She was a life-long member of St. Mary’s Church in Wayne, a member of the Ladies Sodality, and was on a bowling league for years with St. Mary’s. She was Den Mother for Bruce’s Cub Scout Troop, and was a roommother for all her three children in their school classrooms. Connie lived in Wayne for 77 years until she moved to The Village of Westland in 2003 where she made many good friends. She worked once a week in the Village Store, and was the usher at the twice monthly Catholic Mass in the Village Chapel. In 2017 Connie moved to Elizabeth City Health and Rehabilitation nursing home to be closer to family. Connie had a gift for friendship that when she made a friend, they were friends for a lifetime.

Due to COVID-19 concerns, a service of Remembrance and Interment of Ashes will be held at a future date in Wayne, Michigan. Miller Funeral Home & Crematory, 735 Virginia Road, Edenton, is assisting the family with arrangements, and online condolences may be made to them by visiting www.millerfhc.com.