Keeping up in the court 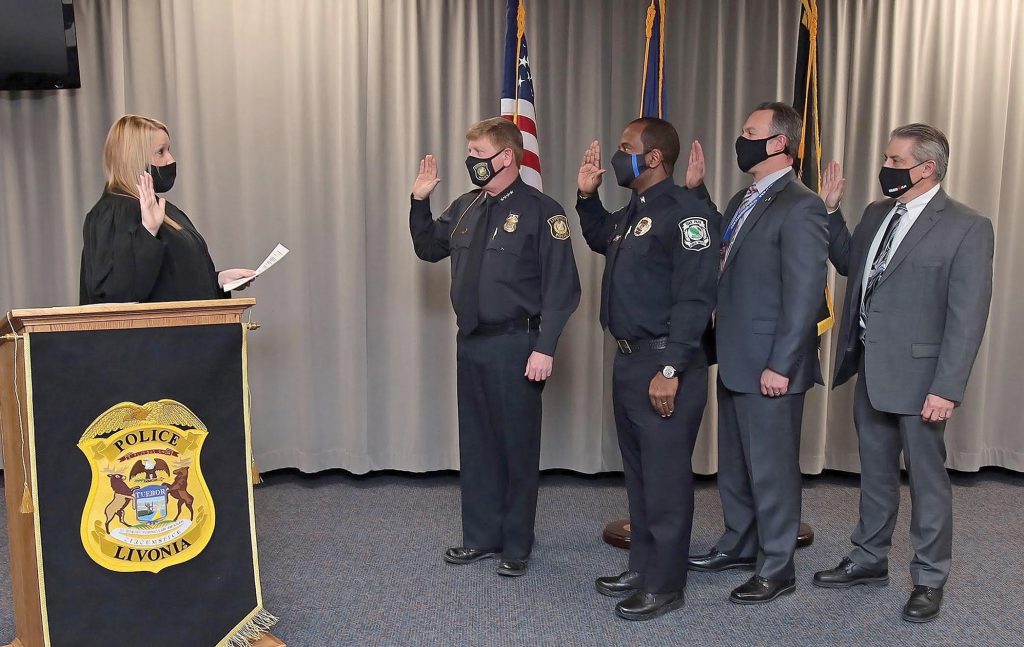 By Carolyn Marnon – Even while COVID rages on in the world, the 29th District Court and Judge Breeda O’Leary continue their duties to administer justice in Wayne.
On December 8, 2020, Judge O’Leary was sworn in as the 29th District Court Judge after winning the November election. A friend and former colleague, Donald Knapp, was getting sworn in by Michigan Supreme Court Justice Brian Zahra. He invited O’Leary to join him. She graciously accepted. “A big thanks goes out to Justice Zahra for taking the time to administer my oath,” said O’Leary. “It was an honor to be sworn in as the City of Wayne’s Judge by a member of our state’s highest Court.”
In December 2020 and January 2021, Judge O’Leary was asked to administer the oaths of office to three organizations: Wayne County Association of Chiefs of Police, FBI National Training Academy, Michigan Chapter and Southeastern Michigan Association of Chiefs of Police.
Two former Wayne Police chiefs, Chief Alan Maciag (who is currently the Northville Police Chief) and Chief Jason Wright (who is currently Van Buren Township Police Chief), asked Judge O’Leary to administer the oaths of office for their respective Boards. One Chief was the incoming President of an Executive Board while the other was the outgoing President.
Since being elected, O’Leary has had to attend a judicial training seminar. Traditionally conducted in Lansing and lasting a week, the training occurred via Zoom this year. The seminar covers the most common areas of law that a judge will encounter. “I enjoyed learning the creative ways that Zoom is being used in the judicial process to become more efficient and the requirements that must be satisfied when a proceeding is conducted via Zoom.”
“As Wayne’s District Judge, my duties include presiding over all Civil cases filed in our court, which include small claims, landlord/tenant, and general civil cases up to $25,000. I also preside over all misdemeanor cases committed in the City of Wayne from arrest to sentencing and while on probation. I preside over all hearings on civil infractions tickets written in the City of Wayne. I handle all felony cases committed in the City of Wayne from arraignment through the preliminary exam. I also preside over the 29th District Court’s Regional Behavioral Treatment Court Program. I am on call 24 hours a day, 7 days a week, to review and approve or deny search warrants requested by law enforcement. Finally, as you have seen, I can administer oaths of office to elected officials and conduct marriage ceremonies for residents.”
“As the newly elected judge for the City of Wayne, I look forward to finding creative ways to continue serving the community at our court.”