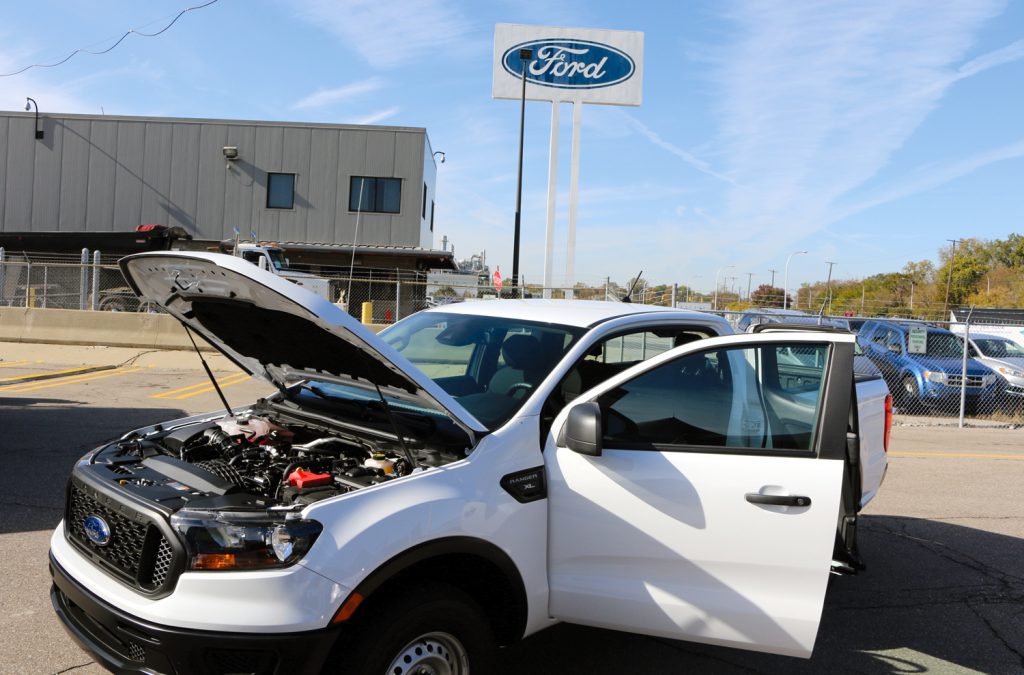 The new Ford Ranger built in Wayne at the Michigan Assembly Plant.

When many of Michigan Assembly Plant’s 3,000 workers gathered Monday, October 22, at the plant, they celebrated a rebirth in more ways than one.
The festivities marked a renaissance for a plant just outside of Detroit that has experienced the highs and lows of the American auto industry for the past six decades. The occasion also signals the rebirth of Ford Ranger, the mid-size pickup that will return to American roads early next year after an eight-year hiatus, fully modernized for today’s truck buyer.
The special celebration to mark the kickoff of Ranger production included leaders from Ford and the United Auto Workers. Plant employees, media and others had a chance to ride in the Ranger on a custom-built, off-road course in the parking lot of the plant.
“Ford truck fans demanded a midsize pickup that’s ‘Built Ford Tough,’ and we’re delivering with our all-new Ranger that’s specially designed and engineered for American truck customers,” said Joe Hinrichs, Ford’s president of global operations. “At the same time, we’re revitalizing our Michigan Assembly Plant and securing good-paying jobs for our hourly employees here in the U.S.”
Ford has invested $850 million to build exciting new vehicles at Michigan Assembly Plant, including the all-new Ranger for North America and the highly anticipated new Ford Bronco, scheduled to begin production in 2020.
For Michigan Assembly, a sprawling 369-acre plant in Wayne which opened in 1957 building station wagons, the start of Ranger production marks a new era.
Beginning in 1966, the plant began a 30-year run of building Bronco, one of the original sport utility vehicles that gained popularity in post-War America. Michigan Assembly gained acclaim as being among the most important and profitable factories in the world when it made Ford Expeditions and Lincoln Navigators from 1996 to 2008.
Early this year, Michigan Assembly ended production of the Focus small car to make way for a massive retooling in preparation for the Ranger launch.
The factory is set to build two high-profile vehicles again in the Ranger and all-new Bronco as American appetite for pickups and SUVs continues to grow.
“The revitalization of the Michigan Assembly Plant and renewed production of the Ford Ranger is another exciting chapter in our state’s comeback story,” Michigan Gov. Rick Snyder said.
“This is also an opportunity to look toward its promising future with production of the all-new Ford Bronco on the horizon. I thank our partners at Ford for investing in Michigan and contributing to the Motor City’s legacy as the automotive capital of the world.”
Ford is transforming its product lineup, building on truck, SUV and commercial vehicle strengths. Ranger is one of the first in an onslaught of all-new vehicles that will see Ford aim to replace more than 75 percent of its current North American portfolio by 2020.
“UAW-Ford members take pride in relaunching the all-new Ranger right here in Michigan,” said UAW-Ford Vice President Rory Gamble. “Our UAW brothers and sisters take great care in the quality and craftsmanship customers will discover when they experience the relaunch of this iconic nameplate.”
Ranger is designed for today’s midsize truck buyer who blends city living with off-the-grid adventure. The midsize pickup will deliver utility, capability and technology those customers want and need.
Powered by a 2.3-liter EcoBoost® engine and class-exclusive 10-speed automatic transmission, Ranger will deliver driver-assist technologies and connectivity features as well as best-in-class payload, gas towing and gas torque.
“We have been waiting for this day for a long time,” said Michigan Assembly Plant Manager Erik Williams. “The Ranger is back home in the U.S., and our employees at Michigan Assembly Plant are thrilled to be able to build it for our customers.”
Ranger offers such innovative technologies as standard Pre-Collision Assist with Automatic Emergency Braking, available Blind Spot Information System with class-exclusive trailer coverage, and available SYNC® 3 with Apple CarPlay™ and Android Auto™ compatibility.
An available FX4 Off-Road Package includes Terrain Management SystemTM, which provides multiple selectable drive modes and all-new Trail ControlTM to help get through the toughest challenges.

Wayne City Manager Lisa Nocerini attended the celebration to kick off Ford’s production of the Ranger at the Michigan Assembly Plant in Wayne. “This announcement, while a tremendous asset to the City of Wayne’s growing, diverse economic base, in my opinion, was about the hard-working men and women at the Michigan Assembly Plant and the members of the United Auto Workers Local 900. For decades, Wayne, Ford and UAW Local 900 have shared a deep connection. This announcement only makes the relationship stronger. We are proud that global leaders, like Ford Motor Company, continue to invest in our people and in our community. It was an incredible honor to have an opportunity to share this day with everyone who made it possible.”
Wayne Mayor Susan Rowe commented after attending the celebration, “Today was an exciting day for FMC (Ford Motor Company), MAP (Michigan Assembly Plant) and the City of Wayne. The Ford Ranger coming back home for its new production will be a boost to those Wayne residents who work at the MAP.”
City Councilman Tom Porter said, “Monday, October 22, was a fantastic day at Ford Michigan Assembly Plant as they rolled out the Ford Ranger for everyone to see and take a ride in. Knowing the outstanding UAW and Ford team at the plant, I see fantastic things in the future for the great looking Ford Ranger mid-size pickup.”
President of UAW Local 900 Dwayne Walker says the future looks bright. “Producing the Ford Ranger in Wayne is a commitment and gives UAW members a future. It says a lot for Ford to make a commitment to the community. We went through times when the future was uncertain. This product makes the future look bright.”