Local auto workers give back to community 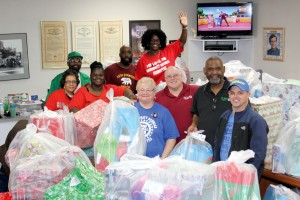 By Dave Merchant – Charity comes from the heart and it also comes from the wonderful people who work in the auto industry and are fortunate enough and willing to give back to the Wayne, Westland and surrounding communities and people who may need a little help around the holidays.
Auto workers believe in helping those less fortunate than themselves and the Christmas season proved once again that United Auto Workers Local 900 not only cares about the community but also helps give them a good holiday.
Mike Smith, Vice President of UAW Local 900, said this time of year there always seems to be a need for adults as well as children.
“It is one of our community service groups,” Smith said. “We raise money on the floor (of the factory), have trees at the local for tree angels. We raised between $100 and $150 per child.”
They get lists of the children from area churches and organizations. They try to get different names and different children each year.
Co-person of this committee is Ebony Kennedy and her mother, who is retired from the UAW, Carolyn Kennedy. They have both been excellent on the committee for years according to Smith.
Smith said the community service group had 150 kids they donated money or gifts to last holiday season. The children and their parents had a lunch in a hall, which according to Smith was packed. They were joined by Santa and Mrs. Claus.
“The Plant Chairman and everyone dug deep to help,” Smith said. “We are all fortunate to give back. The UAW as a whole likes to give back.”
Smith said that Westland Councilman Bill Johnson who also works at Ford Motor Company is in charge of the local Goodfellows organization. The UAW helped the Westland

Goodfellows pass out some 900 turkeys this season and the group raised $73,722.