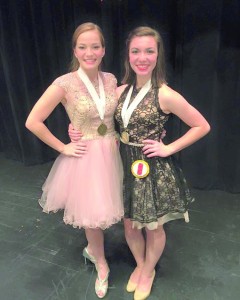 By Carolyn Marnon – Imagine how you would feel if you were standing on a stage waiting for the emcee to announce the winner of the Distinguished Young Women of Wayne-Westland (formerly Wayne-Westland’s Junior Miss) and you were a teenage girl.  Teenage girls giddy with excitement.  Teenage girls wondering if the judges saw that one mistake they made.  Teenage girls who hope their hard work will pay off (in scholarship dollars, of course).
Not one, but four, girls were named “official” winners in the Wayne Memorial High School auditorium on Friday, December 4:  Antrunika Alonzo, Kelsie Wysong, Riana Hardyniec (all Wayne residents) and Kaitlyn Balko of Westland.
Because the Distinguished Young Women program is in a transition period from high school senior girls to high school junior girls, this year’s program had both seniors and juniors competing.  The program opened with both classes of girls (2016 and 2017) performing a dance routine to “Man! I Feel Like a Woman” while wearing jeans, white shirts and white tennis shoes. The local directors, Lauren Perry and Jodi Berry, try to encourage the girls to use what they already have in their wardrobes.
After each girl introduced herself, the judges were introduced.  Prior to the event, the girls were judged in Scholastics. A panel of qualified educators reviewed and rated their transcripts of grades, scholastic test scores and college entrance examinations. Scholastics accounted for 25% of their score.  They were also interviewed by a panel of judges.  The judges looked for perception, sense of values, clarity of expression, concern and ability in human relations.  The interview accounts for 25% of the score.
At the event, the girls were judged on Talent (20%), Fitness (15%) and Self-Expression (15%). For talent, the judges look for originality, technical ability, appropriateness of selection and costume, and stage presence.  For fitness, the judges look for coordination, stamina, agility, posture and carriage.  Each group of girls performed a fitness routine to “Born This Way” by Lady Gaga. Finally, for self-expression, the judges evaluate the girls based on their ability to display grace under pressure, communication, confidence, and naturalness in carriage, posture and poise. When the senior girls came onstage, many of them looked like ballerinas on a music box.
Here they are-your Distinguished Young Women of Wayne-Westland: 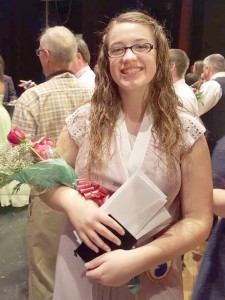 “I was so surprised when my name was called.  I think my jaw dropped because I was so surprised.  I couldn’t stop smiling, and I actually cried because I was so excited.  That moment was one of the best moments of my life.”
Riana grew up watching the older girls at her dance studio participate in the Distinguished Young Women program; she thought it was amazing. It made her excited to participate when she was old enough.  She also knew the program was a good way to make friends and receive scholarships.  “The fact that this program would give me many new experiences and opportunities made me want to be a part of it even more,” said Riana.
Riana attends Wayne Memorial High School. She would like to attend either Grand Valley State University or the University of Michigan; she plans to study biomedical sciences as an undergraduate and then go on to become a pediatric doctor.  Her modern day hero is her brother who is in the US Air Force.  For the on-stage question, Riana was asked if she believed she learned more when she wins or when she loses.  She replied that she believes she learns more when she loses because she can learn what she did wrong and how she can improve on that.
Riana loves to dance; it’s her passion.  She started dancing when she was 4 and has been a competitive dancer for the past 11 years. Her talent was a lyrical dance performed to “The Face.”
Riana won the following scholarships: $100 for Be Your Best Self essay, $150 Fitness, $250 Scholastic, $200 Talent, $250 Interview, $150 Self-Expression and $800 as the overall winner.  Her scholarship total is $1900 from the program.

2016 Distinguished Young Woman of Wayne:
Kelsie Wysong
“When I was announced the winner, I felt so honored.  I’ve lived in Wayne my whole life and I’ve given so much of my time and effort to benefit the city.  I’m so happy to be able to represent it.”
Kelsie wanted to better prepare herself for college.  She also knew the program was a good way to get scholarships and to become a more well-rounded person.  “The hardest part was committing to it. I was very worried that I was spreading myself too thin.  I wanted to focus on schoolwork, dance, senate or my family.  I’m happy I persevered,” said Kelsie.
Kelsie attends Wayne Memorial High School.  She plans to attend the University of Michigan to study bioengineering. She received the HAIL scholarship from UofM which offers free tuition and more for high achieving, low-income kids.  Her modern day hero is her Aunt Sara.  For her on-stage question, she was asked what she would ask the presidential candidates if she had the opportunity to attend a debate.  Her response was that she would ask what they planned to do to benefit the younger generation because the younger generation has less of a voice. However, many of the decisions made by the next president would be directly affecting them.
Kelsie loves to run and dance in her spare time.  She dances for both Michigan Dance Alliance and Detroit Tap Repertory.  Her talent was a tap dancing routine to “Secrets.”
Kelsie won the following scholarships: $150 Self-Expression, $250 Scholastic, $250 Interview, $200 Talent, $100 Be Your Best Self essay and $400 as the runner-up.  The runner-up is given the title of the city she lives in, while the winner gets the Wayne-Westland title. Kelsie’s scholarships totaled $1350.
2017 Distinguished Young Woman of Wayne-Westland:
Kaitlyn Balko
“When I was announced the winner, I was so shocked.  Going into the program, I wasn’t expecting to win.”
Kaitlyn came to the program because her best friend signed up.  Her mother and her friend then talked her into joining also. “The hardest part would’ve had to have been the self-expression/poise routine.  I had never walked in heels before until this program,” stated Kaitlyn.
Kaitlyn attends John Glenn High School. She’s not sure what college she will attend; some of her choices include Western Michigan University, Central Michigan University, University of Michigan and Grand Valley State University. She is thinking of studying accounting and is hoping to play soccer in college. Her modern day hero is Emma Watson.  On-stage, she was asked how technology affects her generation’s ability to communicate and relate to older generations.  She responded that technology is affecting her generation in the wrong way. They use their phones to talk to others so much that they struggle talking to each other in person.
In her free time, Kaitlyn is a volunteer coach for a young soccer team.  She also loves to read and perform on stage (drama).  Soccer is her passion.  She performed a monologue as her talent.
Kaitlyn won the following scholarships: $100 Be Your Best Self essay, $250 Scholastic, $150 Self-Expression, $250 Interview and $800 for winning the 2017 title.  Her total is $1550.
2017 Distinguished Young Woman-Wayne:
Antrunika Alonzo
“When I heard my name announced as the 2017 Wayne-Westland runner-up, I was overwhelmed! I had so many mixed emotions of joy and shock, and I am so thankful for the program.”
Antrunika joined the program when there was an announcement at school talking about scholarships for young women. She attends Wayne Memorial High School.  She plans to attend Emory University and study to become a Rehabilitation Physician. Her modern day hero is her mother.  On stage, she was asked how she defines a leader. Her response included a person who takes responsibility and who takes the initiative to do something someone else wouldn’t do.
Antrunika loves to swim and play the cello.  She plays the cello with the symphony orchestra at Wayne Memorial.  For her talent, she played “At Twilight” on her cello.
Antrunika won the following scholarships: $100 Be Your Best Self essay, $100 Spirit award, $250 Scholastic, $200 Talent, $200 Fitness and $400 as 2017 runner-up. Her scholarships total $1250.
This was the 49th year that Wayne-Westland has had a local program. The four winners will now go on to the State program in Saline later this month.  “It’s been very helpful to come from a local program and have people around to show me the ropes instead of going in blind.  I’m also very excited not only for the opportunity to go to states, but to be able to do it with Riana. We have been best friends since we were 4, and it’s been great to be able to make these memories together in our senior year,” stated Kelsie.
The winner of the state program will go on to represent Michigan at the 2016 National Finals to be held in Mobile, Alabama, June 23-25.

Local auto workers give back to community

Wayne girls’ hoop is on the rise