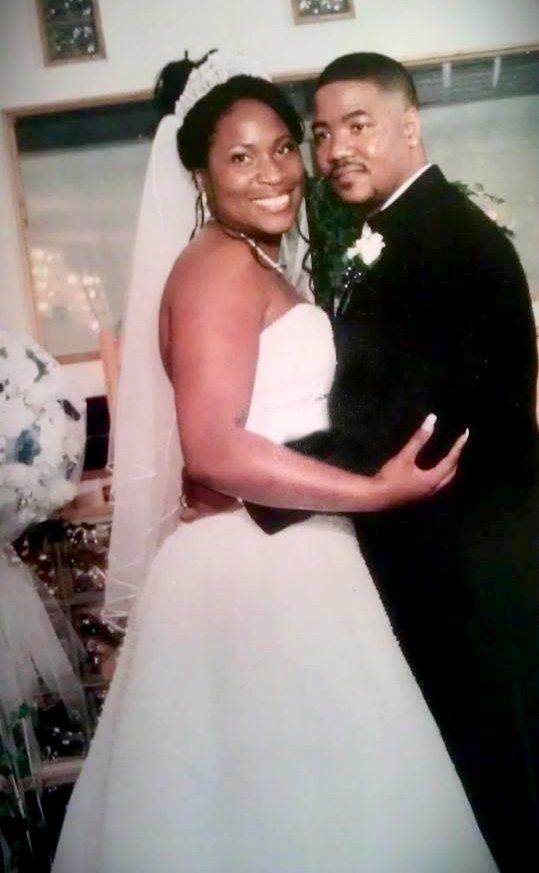 By Carolyn Marnon – Look around you and I am sure you will find many couples who have been happily married for a number of years. Here are just a couple stories from around the community.

They’ve been together through thick and thin for 18 years. Shawna and Dwayne Walker met when they both worked at the Michigan Assembly Plant in Wayne back in November 1999.
“When I first met Dwayne, I knew. I called my mom and told her ‘I met my husband today,’” Shawna recalls with a smile. Dwayne sits beside her; he’s smiling too.
Shawna worked on the line hanging wires. Dwayne was the Union Rep. He was always walking around. Eventually he sauntered up to her and started talking to her. They began talking more as the days went by and found that they had many things in common. One of the biggest commonalities was that they both felt giving back to the community was important. She says church and family were also important to her and he agreed. “We were cool—hanging out as friends. No pressure,” Dwayne says. 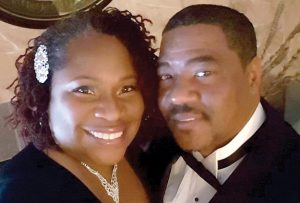 They each already had families, so when they got married 3 years later, they became a blended family. In 2013, they renewed their vows. They saw it as a celebration of new life. “We’ll spend the rest of our days out spending our kids’ inheritance,” jokes Dwayne. Or maybe he is serious. He and Shawna love to take spontaneous trips together. One day, they drove all along US12 to the Indiana border where they had lunch and then drove back home.
Dwayne is the President of Local 900 UAW and on the Zoning Board of Appeals for Westland. Shawna is the Director of Crossing Bridges, a 501©3 non-profit organization located in Wayne and the Wayne-Westland Community Schools Board President. They support each other by going to each others’ meetings. “It’s a friendly face to look at,” says Shawna. They watch football games together, both on TV and in person. Dwayne thinks it’s still important for them to give time to themselves and their relationship.
At the conclusion of his life, Dwayne quips that he wants it to be known, “he tried to do it all.”

They’ve been married for 51 years. The marriage of Mike and Mona Gocaj was arranged by their families who were friends back in Yugoslavia (now Kosovo). After spending 12 years in Croatia where they had two children, John and Skender, (Skender died in a car accident in 2003), they returned to Kosovo for 3-4 years during which two more children were born, Scott and Cindy.
In 1979, they moved to the United States to join an uncle who had been living here since the 1960s. They worked together in the restaurant business. The family owns US12 Bar and Grill on Michigan Avenue. 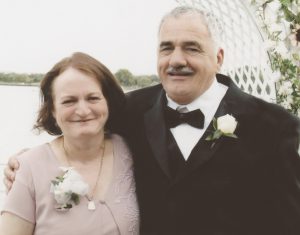 Asked what the secret is to their long marriage, Mike says they had to make it work for the family and the children. They had to stay together for the children. They had four children to raise and support. He also joked that he couldn’t have any more girlfriends; he’s been very loyal since he met Mona. Mona interjects, “He works twelve hours a day; he has no time for girls.”
Mike and Mona both come from big families. Mona has twelve sisters spread throughout the world; there are no brothers.
What are their plans for Valentine’s Day this year? Mike says he will be making a party for Mona. He says he is 84 and still loves his wife. John Goci, their son, says “My mom’s a saint for putting up with him all these years!”
Although it is still a little early to be thinking about St. Patrick’s Day, let it be known that Mona cooks all the corned beef and cabbage herself that US12 serves that day.
And in case you are wondering about the last names-Gocaj and Goci-they are both pronounced “Go-chee.” One is modernized and one is as it was in the old country.