By : John Rhaesa
Comment: Off
Tag: Conference of Western Wayne 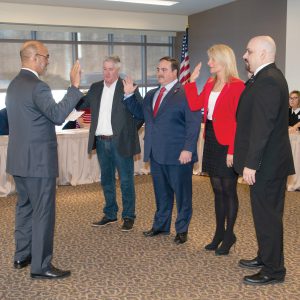 The CWW committee was sworn in by the Honorable Eric Sabree.

The Conference of Western Wayne (CWW), an association of 18 chief elected local officials in Michigan’s largest county, announced today that it has selected its new 2020 leadership team.
The CWW 2020 Executive Committee is comprised of Chairperson Mayor Kerreen Conley (Belleville), Vice-Chairman Supervisor Pat Williams (Canton Township), Treasurer Mayor John Rhaesa (Wayne), Secretary Supervisor David Glaab (Huron Township) and Chair Emeritus Supervisor Robert Nix II (Northville Township), who led the CWW the last year. The committee was sworn in by the Honorable Eric Sabree.
“I am truly grateful to serve the 18 communities in Western Wayne County that make up this organization,” said newly elected CWW Chairperson Mayor Kerreen Conley (Belleville), “Our board has met monthly for well over four decades to not only share best practices between our local leaders, but to also take and advocate positions on state and federal legislation and county matters. Some of our primary focuses include: local government, public safety, substance use prevention, transportation and community and economic development. Our region is the most populated in the County and we pride ourselves on working together to promote Western Wayne.”
The CWW is a bi-partisan group that works collectively to discuss mutual issues, share information and generally improve the quality of life for the nearly 700,000 residents who live in the region. CWW also serves as the 911 Service District for Western Wayne County.
The CWW communities are the Cities of Belleville, Dearborn, Dearborn Heights, Garden City, Inkster, Livonia, Northville, Plymouth, Romulus, Wayne and Westland, and the Townships of Canton, Huron, Northville, Plymouth, Redford, Sumpter and Van Buren.
“The Conference of Western Wayne has worked with Wayne County on many state and local issues. The County and CWW work together to continue open lines of communication between our local leaders and Wayne County, and also to ensure that citizens’ first line of government, local government, has not only a local voice, but representation at the state and federal levels as well. Organizations like CWW help create partnerships throughout Wayne County through collaboration and advocacy”, said Wayne County Treasurer Eric Sabree.
The CWW area is 340 square miles, bordered by Washtenaw County to the west, Oakland County to the north, the City of Detroit to the east, and Monroe County to the south.
Despite the diversity of size, economic development and population density, these communities have been working together –regionally – to enhance this area of Wayne County for over 40 years.
“All of our 700,000 residents and 340 square miles are impacted by the decisions and laws that are made at the federal, state and county levels”, said Mayor Conley. “It is vital that we continue to collaborate in order to create the best solutions possible to the challenges we face.”
The 18 members of CWW selected the new leadership at its board meeting on February 14 in the City of Romulus.