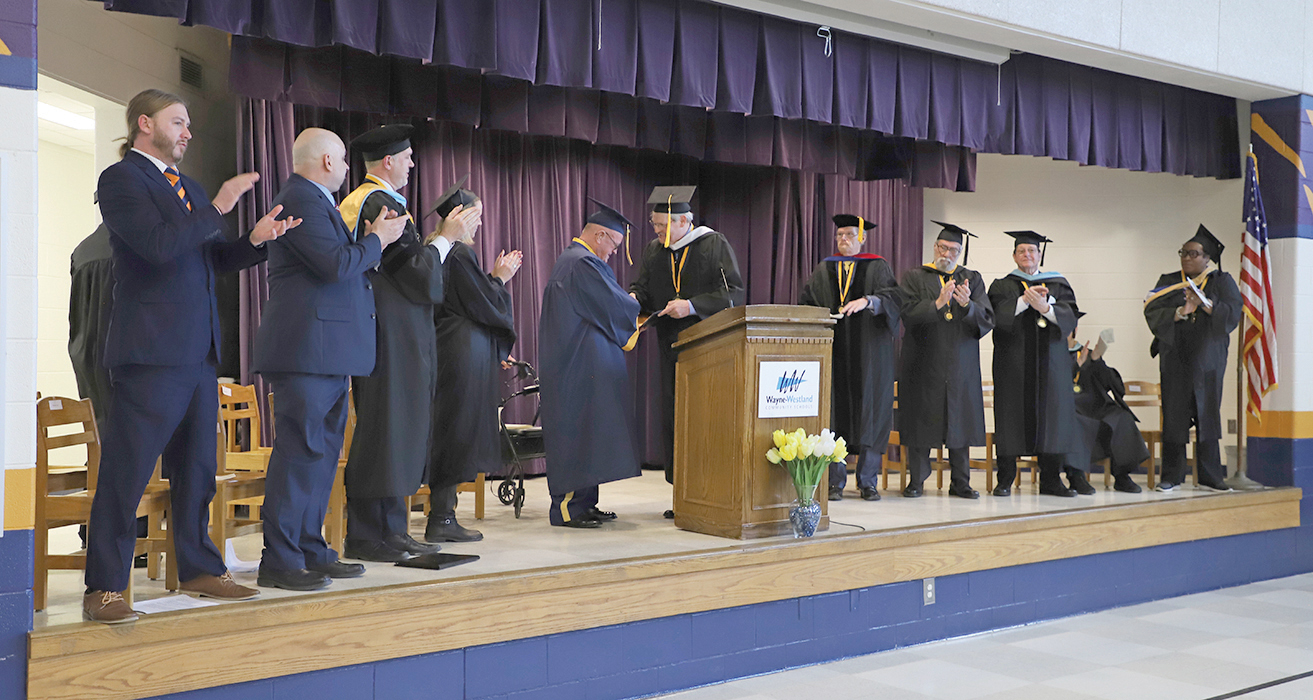 Class of 2020 Graduate Mr. Avery Hall is an Army veteran who left Wayne Memorial High School when he was 17, before graduation, to serve in the Korean War and went on to serve in Vietnam, Germany, Alaska and Fort Sill. He is 84 years old and currently resides in a veteran’s home in Oklahoma. He grew up in, then, Nankin Township and went to Cady Elementary School in Westland in the early 1940s. He was presented with his high school diploma during a graduation ceremony on February 28, 2020. Photo Wayne Westland Community Schools

By Carolyn Marnon – Welcome to the Class of 2020 Avery Hall! A Korean War veteran, Avery left Wayne Memorial High School at the age of 17 to enlist in the Army. He had wanted to join the Army and go to Korea when he was just 16, but he says his folks wouldn’t sign the papers. When he reached 17, he was off to serve his country in the armed forces.
On February 28, Avery Hall walked across the stage at Taft-Galloway Elementary School to loud applause, which included many of his nieces and nephews and friends, a small group of veterans, Taft students, the media, and other locals, to receive his long-awaited diploma. While seated on the stage listening to the accolades being rained down upon him, Avery would toss a thumbs up out to the audience which was tossed back to him by his nephew Mitchell Beardon. 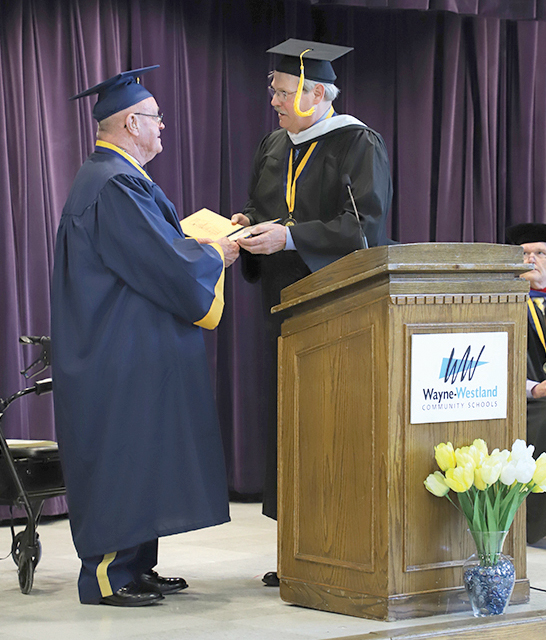 The pomp and circumstance were all attended to on this special day. As Wayne Westland School Board members, the Interim Superintendent Jill Simmons, Taft Principal Brandon Cox, WMHS Principal James Anderson and Wayne Mayor John Rhaesa stood on stage, Avery Hall was assisted to the stage by his son, Wendell Hall, to “Pomp and Circumstance,” the traditional graduation walking song. The Wayne Memorial High School JROTC Color Guard presented the National Colors.
“It is a privilege and an honor to have Mr. Avery Hall and his family here today for this commencement ceremony,” exclaimed Taft Principal Brendon Cox as he turned over the microphone to Wayne Mayor John Rhaesa.
“Our nation owes a great debt to its veterans whose service spans every decade and continues every day of our country’s existence,” Mayor Rhaesa began. “Through untold courage and sacrifice, America’s veterans have secured the liberty which the founding fathers sought to establish here in the New World.” He went on, “Let’s not forget the sacrifices veterans like Mr. Hall made for all of us. They have ensured your right to travel freely all around this great country and around the world. Mr. Hall, I want to thank you on behalf of the City of Wayne, your contributions making the United States of America the great country that it is today.” He went on to say “I think we can all honor individuals like Mr. Hall through our deeds and not just our words. How do you do that? By living our lives and enjoying America’s greatness. We can live our lives and be good Americans that all veterans can be proud to know that their sacrifices were not in vain. This is the thanks Americans can give, live your lives well as productive citizens should.” Upon completion of Mayor Rhaesa’s speech, Mr. Hall raised his arm and gave a thumbs up to the audience.
“This is symbolic,” said WMHS Principal James Anderson. “This is the 100th year for Wayne Memorial, so you are the first graduate of the class of 2020” he said as he turned to Mr. Avery on stage. “It is our honor to reunite with a proud member of the Wayne Memorial community and finish the work that started so many years ago. However, the first thing we need to do is thank Mr. Hall for his dedication and service to our country. I am certain you made sacrifices leaving the comforts of Wayne Memorial as a young man and throughout your military career,” he said as he expressed gratitude for Mr. Hall’s sacrifices. 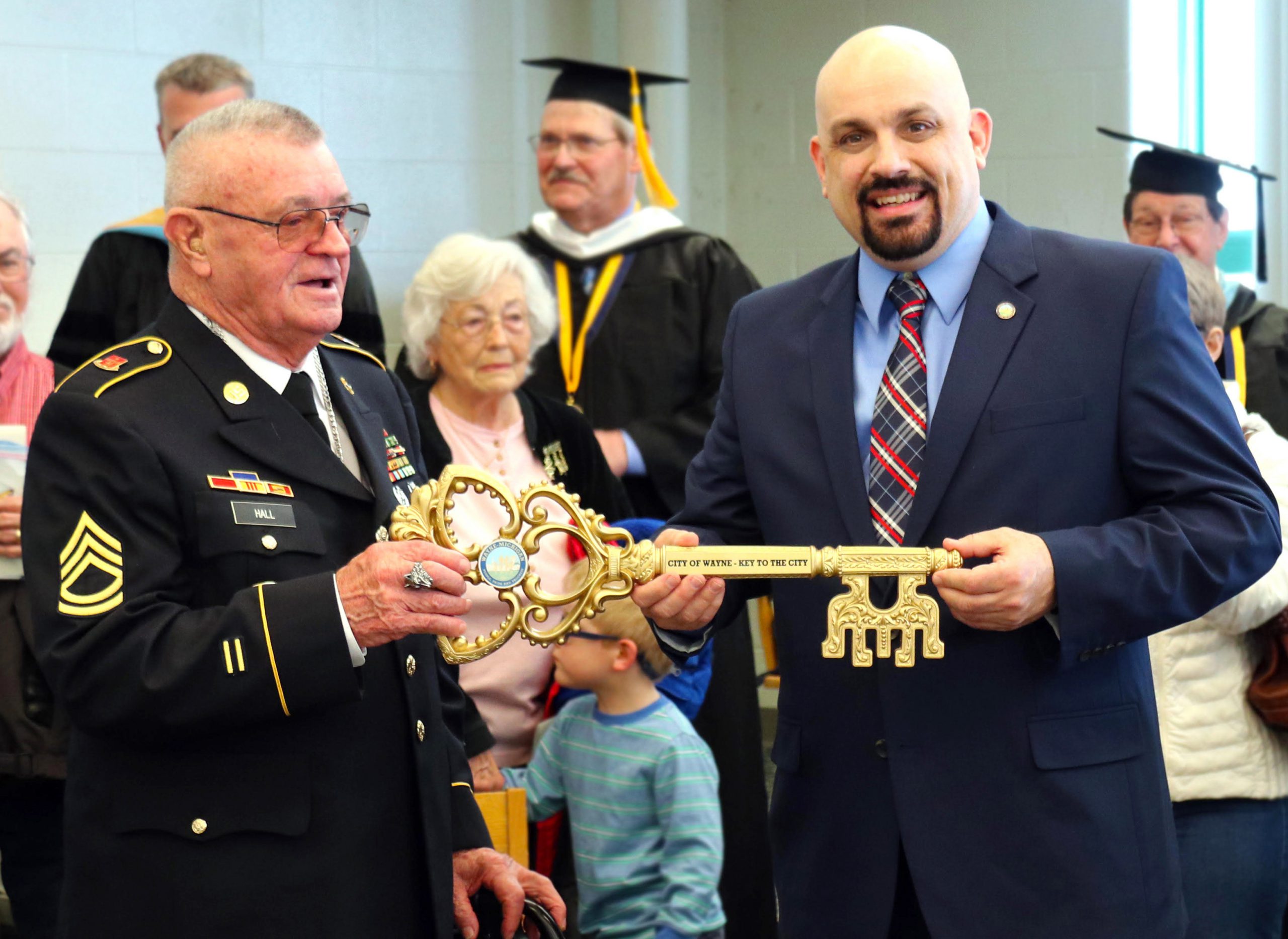 Mayor John Rhaesa presents Class of 2020 Graduate Mr. Avery Hall a key to the city of Wayne. Hall is 84 years old and currently resides in a veteran’s home in Oklahoma. Mayor Rhaesa thanked Mr. Hall for his service to our country and welcomed him back to his hometown. Photo Wayne Westland Community Schools

“When I talk to students today about high school,” continued Principal Anderson, “I talk about opportunity. It’s my belief our goal as a high school is to prepare our students for the next opportunity in their lives, regardless if it is the military, college, a family business or going straight into the workforce. Opportunities are unique. Oftentimes, they only present themselves for a short time before they are missed. I cannot imagine how often you thought about the missed opportunity of earning your high school diploma. I, along with the Wayne Westland Community School District, are proud to be a part of helping you achieve a missed opportunity.” After speaking about Mr. Hall’s career since his separation from the service, Principal Anderson added “It may have taken some time and a lot of patience, but the diploma you receive today will belong to you. You earned it.” He also mentioned the sacrifice Mr. Hall’s parents made of not being able to watch their son cross the stage. When Principal Anderson spoke about Avery’s wife of 60 years looking down upon him on his special day, Avery could be seen kissing his wife’s picture that appeared in the program booklet. Principal Anderson concluded with “You are the definition of Wayne Pride.”
School Board President David Cox presented Mr. Hall with his diploma while stating that Avery was the first in his class of 2020. After being seated, Avery leaned over to Interim Superintendent Jill Simmons and asked “Am I supposed to turn my hat?” which received several chuckles from his family seated in the audience.
Mr. Hall came to the podium and spoke. He first addressed the children of Taft Elementary and expressed the importance of staying in school and getting an education. “Be on time for school, mind your classroom and school rules and,” he chuckled, “eat well.” He thanked everyone for being at the ceremony and gave a special shout-out to WWCSD Administrative Executive Secretary Cheryl Watson for making the event possible.
As the ceremony concluded, Mr. Hall walked down the middle of the audience to “On You Zebras,” the WMHS Fight Song. The audience stood and clapped while Mr. Hall waved and soaked up the admiration of the students as he left the gymnasium.
Avery was born at 335 S. Wayne Rd in what was then Nankin Township. The site was formerly the home of Kmart and now boasts UHaul rentals. His aunt and uncle also had a home on the property which, he said, was vast at the time. This was also a time when Wayne and Cherry Hill roads were both just gravel. Cady Elementary School, which he attended, stood kitty-corner to his home and is now where Bank of America stands. He also attended Wayne Junior High School. 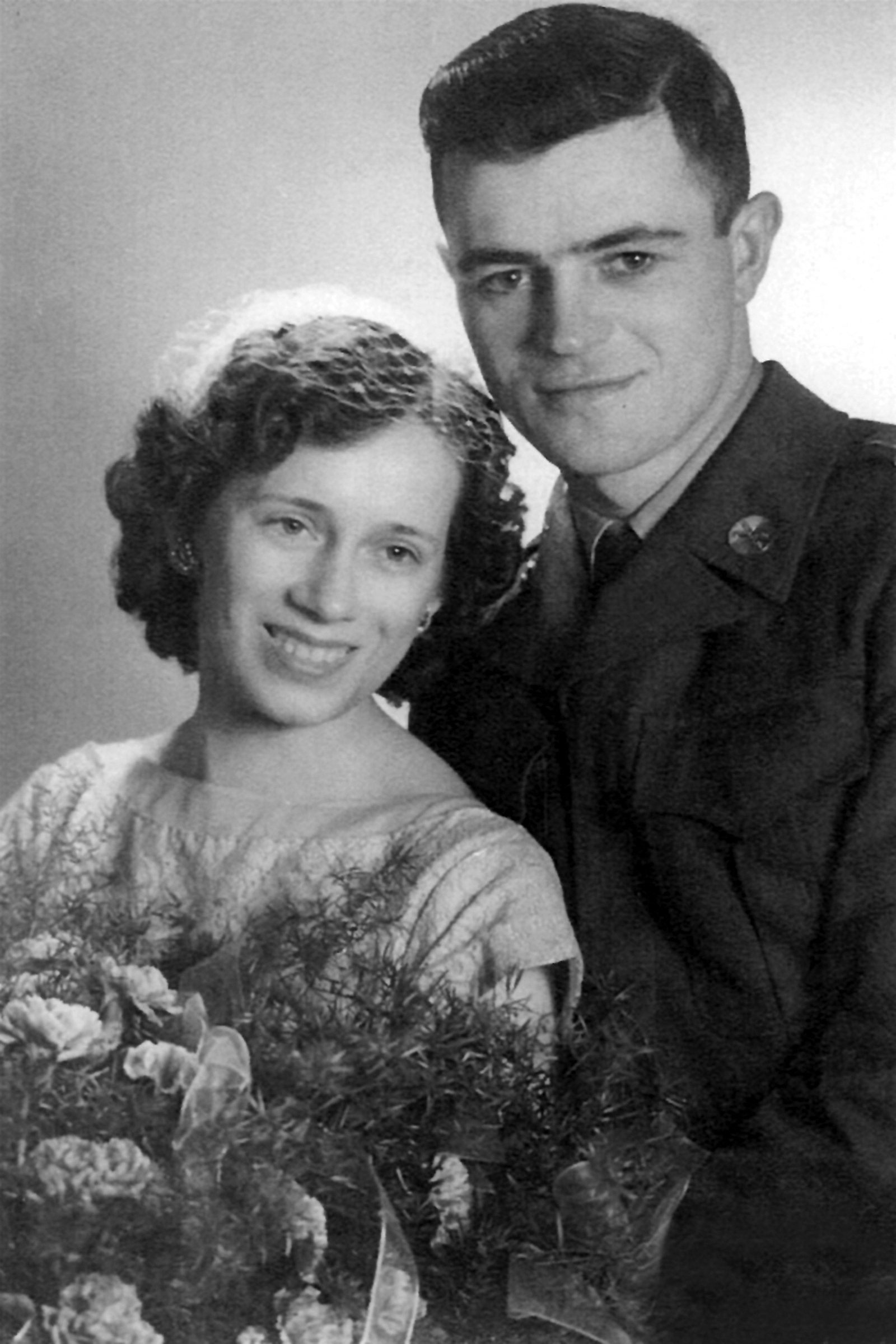 Avery Hall with the love of his life, Aloisia.

Although he had wanted to go to Korea, by the time he had finished Advanced Artillery Training, the Korean War was winding down and he was sent to Germany for three years. He met a young German woman, Aloisia, while he was there. She became his wife; they were married a few months shy of 60 years. Before retiring as Sargeant First Class from the Army in 1973 at the age of 37, Avery had done four tours of duty in Germany and one in Anchorage, Alaska.
Avery worked another 24 years as a facility manager for Lawton Public Schools in Lawton, Oklahoma. Even though he now resides in a veteran’s retirement home in Lawton, he proudly proclaims that Wayne is his home. His son, Wendell, says that the planning of this graduation ceremony has recharged his father. He then went on to say that back home in Oklahoma, Avery goes with friends to watch roller derby on Saturday nights.
Since he left Wayne at the tender age of 17, Avery has been back here in 2004 for the 50th reunion of the Class of 1954, the one which he would have graduated with had he not joined the Army, and for this ceremony. He is amazed at the paved roads and how large the Wayne and Westland are now.
Why was it so important to get his high school diploma? Avery says he got his GED in 1962 while he was serving in Germany. His son and daughter had diplomas, his siblings had diplomas and a grandson is getting a diploma in May. “I wanted to make my grandsons happy. I’ve been dreaming about it (getting his diploma) for years.”