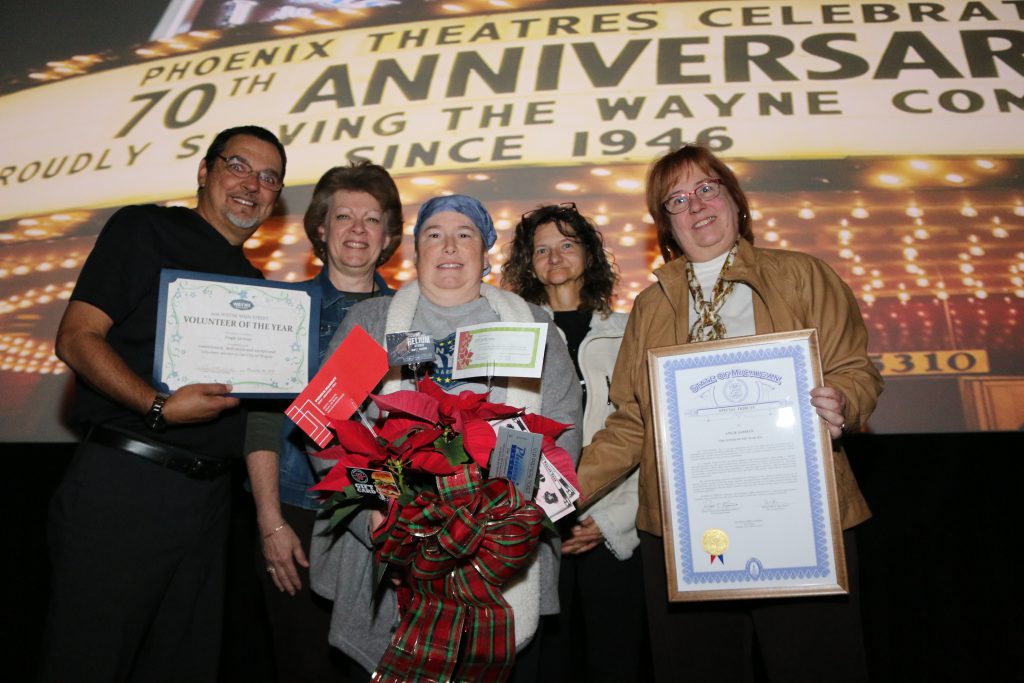 By Carolyn Marnon – Wayne Main Street held their 2nd annual Volunteer Appreciation Event last month at the State Wayne Theater. Volunteers were treated to free popcorn and pop while viewing a special documentary, “Urban Century,” about the changing face of downtowns over the years. WMS former Executive Director, Lindsey Dotson, made a cameo appearance in the film.
After the film, Juan Bradford, Vice President of Wayne Main Street, announced the winner of the 2016 Volunteer of the Year.  As soon as Angie Jarman heard “cookies,” she knew she had been selected.  “I was surprised,” says Angie of her award.
Angie has been the project manager for the Scarecrow Project for the past several years. She works tirelessly to gather the scarecrows, get them up on light poles, and then maintain them throughout the monthlong event.
She also oversees the scarecrow reception where the public votes on their favorite in mid-October and gathers the photos for the online facebook-voting contest.
According to WMS volunteer Patt Hartford, Angie is “always willing and ready to help with whatever needs to be done.  She has been a blessing since the day she jumped in to help me at Metro Mall with two trays of the best cookies in town for our Main Street confirmation celebration.  Then her and Kurt saved me at the first Rouge a Palooza, taking on the job of selling Kayak raffle tickets ALL DAY.  Angie has adopted our Scarecrow project and (along with  her husband Kurt), has always come through for us.  She is hard working and takes a great deal of pride in her projects.  I, personally, would be lost without her.”  Patt also commented that Angie “gives from the heart and enjoys volunteering. She is a good example for all of us and deserves this recognition for all her efforts.”
After the cake was served, attendees were invited to stay and watch “Fantastic Beasts and Where to Find Them” as an added bonus to thank them for their hard work throughout the year. “It was great getting the WMS volunteers together for the annual volunteer recognition event. Having that many people who volunteer their time freely because they truly care about the future of Wayne gathered together makes you realize how truly special this community is and how valuable the Wayne Main Street effort is to helping the city get back on track,” said Juan,  Angie is “truly a special person. She is always there with a smile on her face, ready to lend a hand no matter what the project is. Her value to the WMS board and the committees that she serves on cannot be overstated.”

She wrote a novel in 30 days