She wrote a novel in 30 days 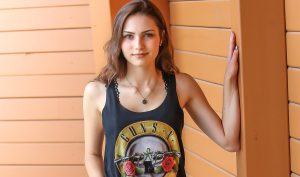 Somewhere Between
Here and Heaven
You’re halfway there and here.
Your eyes are looking up and waiting,
while your body is here and giving in.
You’ve said you’ve seen His angels.
You’ve said you’ve seen Him.
You’ve said to let go, so that you can finally let go.
You’ve said you’ve seen the bluer skies and the brighter yellow.
You’ve seen the better part of this life that you’ve been given.
You’ve seen it all, but you’re still halfway here.
The part of you that’s here won’t seem to let go.
The cells living inside of you are holding onto their last limb,
because they know that soon
their time is gonna come, and that you’ll win and be happy again.
Their days are coming to end while yours are just beginning.
You won’t be halfway there and halfway here anymore.
You’ll be there with Him, finally living the life that was actually given to you,
forever.
Eternally and happy, you will be there.