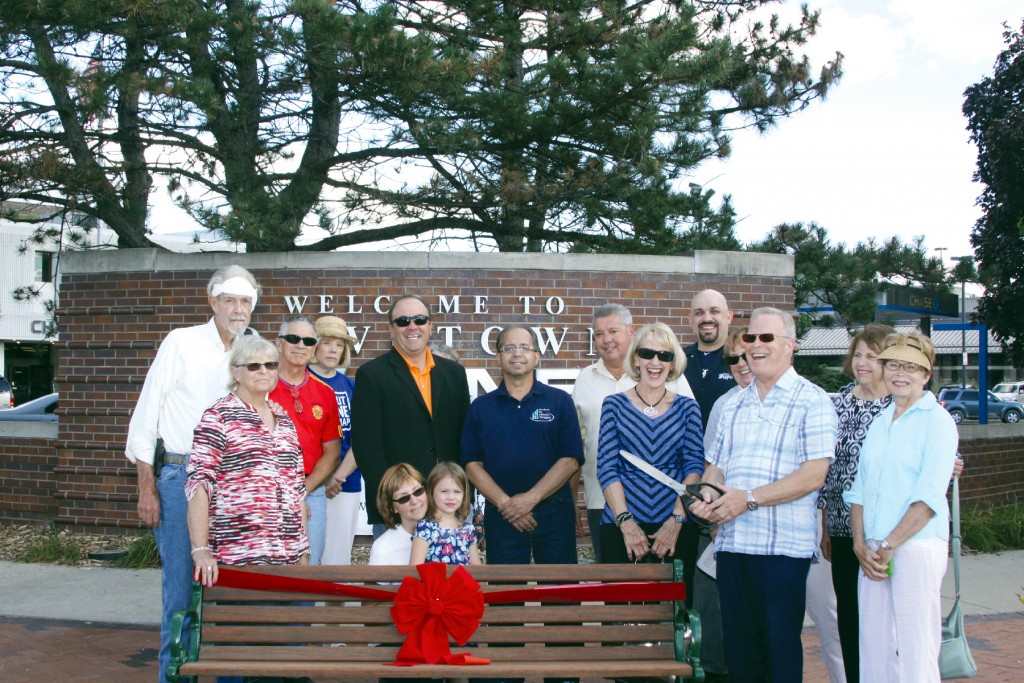 Gordon Jones prepares to cut the ribbon on the bench sponsored by American Jetway in Downtown Wayne with the other bench sponsors looking on. Photo by Carolyn Marnon

Wayne Main Street held a dedication ceremony on August 21 for 8 benches that were placed along Michigan Avenue in downtown Wayne.  The benches had been obtained from Belleville several years ago at a discount.   After getting permission from MDOT to place the benches on Michigan Avenue (not an easy process), project manager Cindee McClure was able to obtain the help of Boy Scout Troop 1736 of First Congregational Church, Dale Webb of Plymouth Plating Works, John Rowland of Jack’s Sport Center, Dave Tompkins of Tompkins Sandblasting, Mary and Jeff Powers, Dan Hamann and the City of Wayne DPW, Mike Buiten and Kevin Hardy of City of Wayne Building and Engineering, the City of Wayne council and administration and Tim McClure to get the benches taken apart, refinished, put back together and installed.  There had originally been 9 benches, but one didn’t make it through the refinishing process.  It was a time-consuming project, but in the end, there are now 8 benches that can be used to stop and relax while walking in Wayne.
Each bench was sponsored by an individual, family or business.  You can find who sponsored the bench on the plaque adhered to the bench back.  The 8 benches were sponsored by American Jetway Corporation, Uht Funeral Home, Wayne Rotary Club, Tried and True Thrift Store, in memory of Norm Stockmeyer, the Copland Family in memory of Darrell Copland, Noella and Jack Russo Family Foundation, and an anonymous Wayne citizen.
After the dedication, the bench outside Kicks and Tried and True was especially busy.  Anthony Cook appeared to be resting on the bench after shopping at Puffer Red.  He was able to get into the picture that was being taken of Tried and True representatives with their sponsored bench.  Also helping to inaugurate the bench were Amanda Thompkins and John Kurliak, Wayne residents who had just gotten engaged earlier in the day.
Now when you want to walk around in downtown Wayne, you will have a place to sit and rest or to just people-watch.  The benches were situated to face the buildings to actively engage people to interact with each other rather than staring out at traffic.