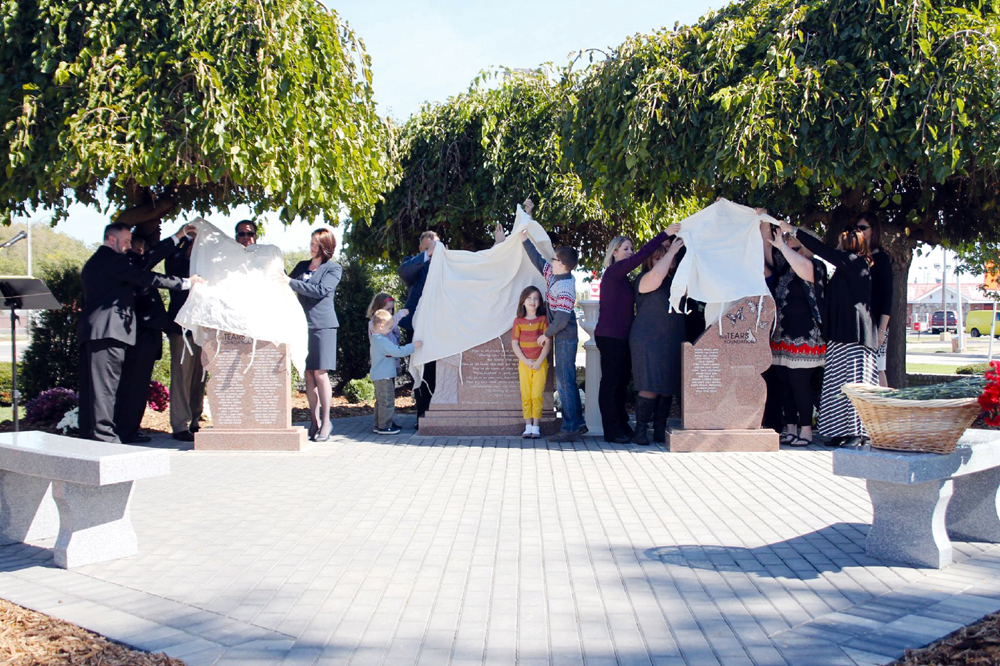 By Carolyn Marnon – Tears fell as family members remembered their babies at the unveiling of the TEARS monument in Wayne on October 10.  The parking lot of Harry J Will Funeral Home was crowded with friends, family and othering caring citizens.
The ceremony opened with Sarah Tweet singing “A Mother’s Prayer.” Michael Majeski led the audience in the opening prayer followed by Buddy Shuh, Michigan’s TEARS representative, giving the opening remarks.
He thanked the many supporters, including Dignity Memorial, whose representative, Kevin Bullock, also spoke.
Sarah Slack, the founder of TEARS, told her story of loss and what led her to establish the TEARS Foundation.  Buddy Shuh then spoke about how he came to be involved with the TEARS Foundation after an appearance on “The Biggest Loser.”
The Shuh family, Harry J. Will Funeral Home representatives, Patton Monument representatives and representatives from TEARS gathered around the new memorial before unveiling it to the crowd.
Sheri Blumberg recited her poem, “Angel of Hope”, that was written for her baby, Tessa Joy Blumberg.
As Shelby Shuh read the names of all the children memorialized on the monument, roses were handed out to the families as they approached the monument so they could place them in a large vase at the monument.
While Sarah Tweet sang “Fly,” a white dove was released from a basket into the sky.
Rev. Tyson Noffzinger said the closing prayer to end the ceremony.  Attendees were invited into the funeral home for appetizers and beverages.  They were also invited to use paper and a crayon to make rubbings from the monument before leaving.
You can visit the TEARS monument outside the parking lot of Harry J. Will Funeral Home on Michigan Avenue.