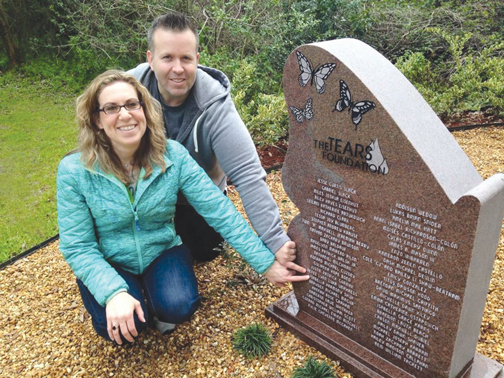 9 years ago, Allen (Buddy) and Shelby Shuh lost their 5 ½ month old daughter, Isabella Harmony Shuh, after she was born with serious complications, including a missing spleen and kidney, and stomach and heart issues. She also had a serious case of spina bifida. It was a difficult time for the Shuh’s.  They did not have the money to pay for the funeral services. Sarah Slack, the founder of TEARS, a 501c3 nonprofit, stated, “Most parents are prepared to pay for a crib, not a casket.” TEARS seeks to compassionately lift a financial burden from families who have lost a baby by providing funds to assist with the cost of burial or cremation services.
Allen is now a spokesperson for the TEARS Foundation and has been instrumental in bringing an Angel of Hope Monument to Wayne, Michigan.  There are only 4 states with a monument: Washington (where founder Sarah Slack is from), New Jersey, Florida and now Michigan.
On Saturday, October 10, you are invited to attend the unveiling of Michigan’s monument at Harry J. Will Funeral Home in downtown Wayne.  Dignity Memorial has been a partner with TEARS and Harry J. Will to bring the monument here. The ceremony starts at 1:00 p.m. and is  expected to last about 30 minutes and will include many TEARS dignitaries.  Sarah Slack, TEARS Founder, will speak.  Sheri Blumberg will read her poem which is etched on the monument.  The families of the approximately 65 children whose names are etched on the memorial will be in attendance.  After the ceremony, family members will be given crayons and paper on which to etch their baby’s name.  Most people frame these etchings as a keepsake for the child they lost. Harry J. Will will be providing light appetizers.  There is no cost to attend.
The TEARS Angel of Hope Monument stands 5 feet tall and is holding a baby. On either side of it are butterfly monuments which feature the names of the babies who are loved and remembered.  There will be benches around the monument so visitors can have a quiet place to reflect and honor the life of the babies who have gone too soon. Work is being done to cut out the curb in the parking lot near the monument to make a walkway with brick pavers that will circle the area. Artman’s is providing some plants.  The area is being landscaped so that the monument can be added to in the future, if needed.
Anyone who has suffered the loss of a child under the age of 1 can have their child’s name etched on the monument.  Although the names for 2015 are already engraved, a person can have their baby’s name added at a later date.  The Michigan monument will have names added once per year in October. You can add a name by making a one-time financial donation of $250 or signing up to pay $20 per month for at least 12 months. This money goes into the TEARS Foundation to help pay for funeral services of the newly bereaved.
TEARS pays for current infant funeral expenses and unexpected child funeral expenses.  They are not able to help with expenses over 30 days old.  Harry J. Will Funeral Home, Wayne, and John N. Santeiu & Son, Inc, Garden City, are approved providers that work with TEARS.
October is Infant Loss Awareness Month.  According to Buddy, 1 in 4 women will suffer a miscarriage, stillbirth or infant loss.
Allen and Shelby are hoping to expand the emotional support services they provide as Peer Companions. Their goal is to have a TEARS center in Michigan where they can host a monthly support group.  They are looking for the donation of an office space to hold the meetings. If you or someone you know has space to donate, contact Allen by email at 12969@msn.com.
This summer, The TEARS Foundation-Michigan Chapter was awarded a $1000 grant from Community Financial Credit Union’s Summer of Sharing program. There were 327 stories submitted on their website between June 8 and August 28 of which 60 were awarded the $1000 grants.  “I did not know Donna (Kuti) had nominated TEARS for the Summer of Sharing grant. I was very surprised when I received the email saying we had received a $1000 grant. With that, we will help two Michigan families with funeral expenses for their babies,” stated Allen Shuh.