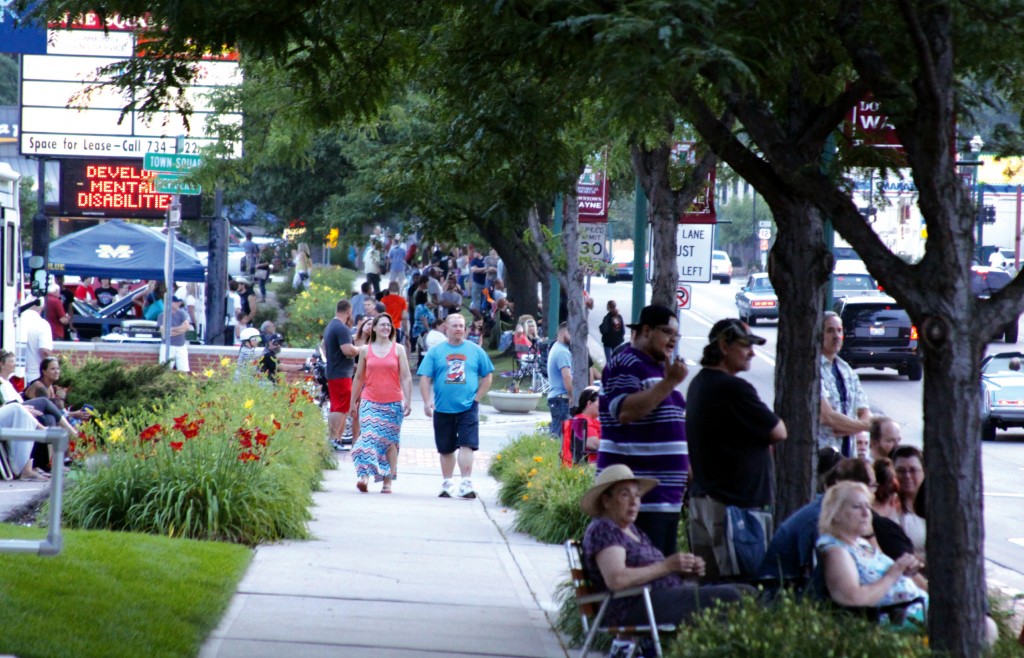 Streets of Downtown Wayne were full of spectators for Cruisin’ US 12.

By Dee Ryan – June 17th was the terrible tragedy in Charleston.  Nine innocent people were shot at Emanuel AME Church.
On Sunday, June 21, Pastor Chris Richards of the Congregational Church, asked Pastor Virgil Humes of New Hope Baptist Church if he, and members of their Church, could join New Hope’s Sunday Service.
Pastor Humes and his congregation welcomed the visitors with great warmth and open arms.
Our Mayor, Jim Hawley, and his wife, Sue, along with Pastor Richards, joined New Hope’s worshipers for the service.  Our former Mayor, Al Haidous, was already in the church when the Congregational Church members arrived.
Pastor Richards gave a brief talk and offered a prayer. Mayor Hawley and Commissioner Haidous spoke to the New Hope parishioners in a comforting manner, and I, for one, hope that this type of ecumenical coming together will continue.

JoAnne Stark tells me about the passing of Jim Goosby. Mr. Goosby was the longtime owner of Flanagan’s Pub.  Flanagan’s was on the corner of Niagara and Michigan Ave.
It has has had many names since.  The last name being “Wayne’s Bar and Grill.”
Jim Goosby lived on Chestnut St. while raising his family, but in later years his home was on Clinton St. He was born on February 25, 1935 and died of Parkinson’s disease on June 13 of this year.
He has 3 sons, Mark, Tim and Paul; 4 granddaughters, 1 grandson and 2 great grandchildren.
Mr. Goosby was a long time member of the Mason’s and the VFW, and JoAnne Stark worked for him at Flanagan’s from 1991 to 1997.

The Friends of the Wayne Library will host an evening of beer tasting on Friday, August, 21.  It will feature beer from the Liberty St. Brewery.  The Brewery will present 3 specialty beers—Starkweather Stout, Steamy Windows, and Red Glare Ale.  There will be yummy snacks for your enjoyment throughout the evening.
Tickets for the beer tasting are $15.00 and are available at the circulation desk of the Library.

The Wayne Historical Society announced their new Board of Trustees.  They are John Mills; Ron Morgan;  Ann Zimmerman;  Kathy Kovelesky; Albert Damitio; Lindsey Wooten; Brenda Ozog; and Gloria Rowland.
The Society thanks Richard Andrews for his time on the board, and tells us that Al Damitio has lined up wonderful speakers for the Museum’s Fall/Winter Calendar.

“ Cruisin…” on a sunny afternoon.  It was in the parking lot East of Tim Horton’s that our daughter, Maggie, let out a shout and said “there’s my car.” Of course we stopped and talked to the proud owners, Gwenn and Keith Wells.  The car, a beautiful 1973 Buick Riviera “Boat Tail” was gorgeous.
Mr. Wells told us of driving past Jeff Benson Car Co. on Michigan iAve. and seeing the “Boat Tail” and immediately falling in love with it. He stopped and talked to Mr. Benson, saying “I only have $100.00 dollars with me—can you hold it until I get the rest of the money?”  And Jeff Benson did just that.  So Gwenn and Keith Wells got their gorgeous car and we have the knowledge that it really is good to ‘shop in Wayne’.
Further west on Michigan, we saw a 1968 Chevvie, eye popping red. The chassis had been shipped to the Philippines where the body was hand crafted.
We saw street rods and rat rods and a VW bug with a chevy V4 engine in front. There were many handsome cars at McDonald’s, along with Ronald McDonald and WCXS providing the music.
The world’s largest Hearse Club was at ICON Computer’s parking lot, just as they were last year.  “Just Hearse N Around” is their name and they’re based in Hell, Michigan.  In 2011 they broke the Guinness World Record for having the longest hearse parade.  One of the hearses is named “Stay Creepy” and its license plate reads MORBD 1.  Frank Hedeen is the proud owner of the “Casketeria,” a BBQ grill made from a large casket.
At the same parking lot, Linda Viik was selling Goodfellows tickets for the Camaro being auctioned off.  Linda’s daughter, Alisha Schroder, graduated from WMHS in ’06 and was awarded a scholarship from the Goodfellows. She supports the organization because “they do so many good things for others.” 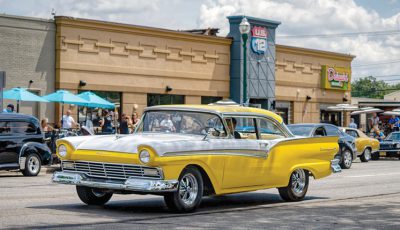