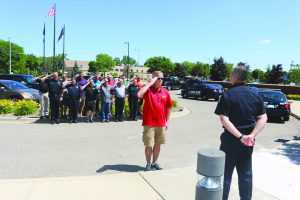 By Carolyn Marnon – The Wayne Police Department is being assisted by resident Bernadette Brock in getting the Neighborhood Watch program revitalized in the city.  Bernadette spoke to those who gathered at the June 30 meeting held at the police station.  The program would be run by and operated by the citizens of Wayne.  She stressed how citizens need to be proactive in their neighborhoods to keep them safe.  She hopes that residents will share with each other and with their neighbors what is going on in their areas.  The plan will be to have a “Zone” watch rather than “Neighborhood”  watch. Meetings would be held once a month at a community location such as the police station rather than in homes.  This is an opportunity for building relationships between the community and the police department and to know who our police are.  The program will start small and grow.  At this time, “captains” are needed to spearhead the neighborhoods.  Come to the next police community meeting July 28 at 7:00 p.m. to get more information.
Also during the meeting, Police Chief Al Maciag told those gathered that he is looking to hire three officers; Lt. Robert Puckett recently retired. Promotions were given to Lt. Finley Carter and Sgt. Abraham Hughes.  The chief is also seeking reserve officer applicants.  Even though the city is having financial problems and it is hard to find officer applicants, Chief Maciag is not lowering the departments standards to try to hire someone.  He is looking for qualified candidates.
As of June 30, 8,186 calls came into the department with only 1,148 of those resulting in a police report being completed.  In June, there were 25 traffic crashes in Wayne, 4 residential burglaries, 4 other burglaries, 13 larcenies, 2 robberies, 9 damage to property incidents, 39 assaults and no arsons.
If you are going on vacation, you can complete the Request for Vacation Watch form found on the city’s website: http://www.ci.wayne.mi.us-/pdfs_2010/vacation_watch_feb_2010.pdf.  Officers from the police department will make periodic checks of your home while you are away. Complete the form with as much information as possible and return the completed form to the police department. The police department requires that the homeowner requesting the vacation watch return the form in person to the police department.
Stay informed by attending the monthly police community meetings.  They are held on the last Thursday of the month at 7:00 p.m. at the Wayne Police Station on Michigan Avenue.