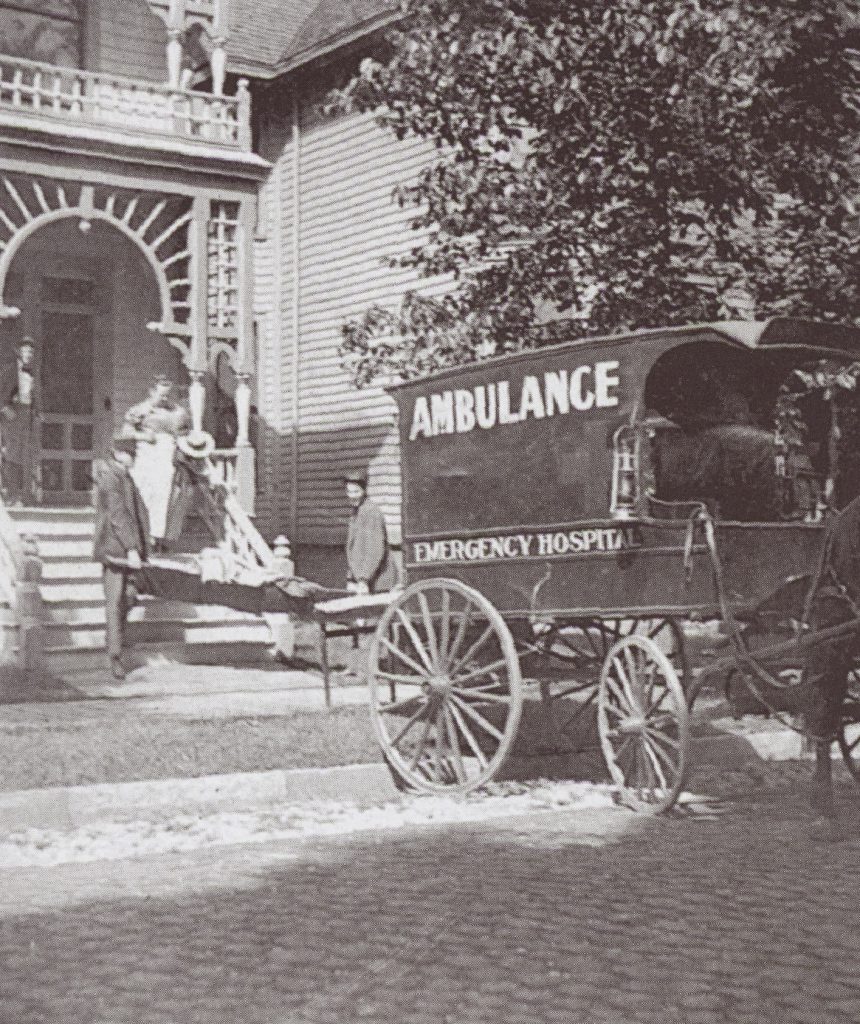 The emergency hospital ambulance in 1901. Dr. Earle, a well known Wayne doctor, is standing on the porch at the left.

By Darlene Hawley – In the early 1800’s,  when George Johnson built the first building in the wilderness now known as the City of Wayne, life was dangerous.  People traveling westward by foot, horseback and wagon were prey to wild animals, thick forests and no roads.  Johnson’s Tavern, built in 1824, provided a place to rest, eat and rejuvenate.  When Ezra Derby bought the property and built a saw mill, our little village was under way.  Small farms sprang up and a store was built to serve the people in this tiny settlement.  Life was simple but still dangerous.  Accidents, fires and illnesses were common and help was often many miles away.  People counted on one another in times of emergency.  Your neighbor was your keeper.
As our community grew there was a need for public safety facilities.  Fires were a huge threat to life and property since the town’s buildings and homes were constructed of wood.  Bucket brigades manned by the townspeople put the fires out using water from the river, wells and ponds.  In 1911 a volunteer fire department was formed and in 1928 a full time Fire Department began operation with three firemen who each worked an eight hour shift.  Charles Goudy worked the day shift, Dan Doletzky the afternoon shift and Henry “Hank” Goudy the night shift.  They were paid $1 per day and $4 per fire run.
Another community need was doctors and hospitals to care for accident victims and those who were ill.  There were a number of doctors in Wayne in the first half of the 20th century as well as hospitals such as Carpenter Clinic and Hospital, Parker-Vincent Hospital   and Nankin Hospital. Transportation to the doctor or the hospital was left to the family.  In early years doctors in the area came to the homes of the farmers or town people who were ill or who suffered an injury.  If hospital care was needed, they were transported by horse drawn wagon or buggy.
The concept of an ambulance to transport critically injured or sick people came about in early wars where soldiers often died because of the length of time it took to “carry” them to field hospitals.  A horse drawn carriage was designed, staffed by a medical officer and an assistant with room for several patients on stretchers.  Ambulances were used during the Civil War and the first civilian ambulance service was organized in 1865 by the Cincinnati Commercial Hospital.  By the turn of the century, most major hospitals had their own private ambulances.  The first motorized ambulance went into operation in 1899 in Chicago.
In areas where there were no major hospitals, the local undertaker’s hearse was often the only vehicle capable of carrying a patient on a stretcher so many funeral homes provided ambulance service.  As a result, the design and construction of ambulances and hearses remained closely related for many years.  The first hearse in Wayne was owned by Funeral Director A.F. Ditsch in 1893 and was drawn by horses.
Mantous Uht operated a funeral home in New Boston but moved his business to Wayne in 1925.  It was located on Main Street behind what is today our Veteran’s Memorial near the Wayne Library.  It was a beautiful old home on a street with other large old homes and giant trees that filled downtown Wayne.  In 1952 Harold Rediske Sr. finished his service to our country and joined the Uht staff.  His son, Harold Jr. began helping in the business while in grade school.  He washed cars, mowed the grass, parked cars and later graduated to delivering the funeral flowers to the cemetery ahead of the funeral procession in preparation for the grave side burial.
Recently, Harold Rediske Jr., today’s owner and operator of the family business which now includes his son Harold Rediske ll, related how ambulance services operated over past years when his father was director and in the early days of his own career.  Most early ambulances were simply intended to transport patients.  The funeral home employee had no medical training and the ambulance carried no first aid equipment.  If a traffic accident occurred, the Wayne County Sheriff’s Dept. was called or a local doctor.  They would in turn call the funeral home and ask for ambulance service.  Simple first aid might be applied and then the patient was loaded into the ambulance and taken to a local hospital often riding alone unattended.  The funeral home was paid $15 by the Sheriffs Dept. for the service of transporting the patient.  (If more than one patient was transported, they were still paid only $15.)  Citizens might call for ambulance service if someone was injured in their home, became ill or was urgently ready to deliver a baby. Many ambulance runs by the funeral home were from nursing homes to the hospital and back again. Mr. Rediske remembers the funeral home purchasing a new bright red ambulance in the early 1960’s.   After two years of use, they sent it back to the plant to have it painted grey and then used it as a hearse.  In 1967 urban renewal forced Uht Funeral Home to move.  They found a new  location at the corner of Glenwood and Harvey St.  That year also ended their ambulance service. Many local fire departments had become involved in rescue and the need for the funeral home to practice this service was coming to an end.  The Wayne Fire Department entered the ambulance business in 1964 when they purchased a Ford Econoline Van called a Fire Rescue Wagon. 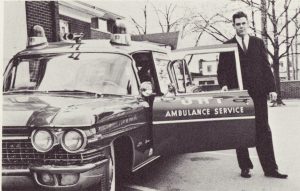 Harold Rediske Jr. use to drive an ambulance for UHT ambulance service.

In 1966 the federal government passed the Highway Safety Act and that changed things dramatically. Among its many standards, the new act set requirements for ambulance design and emergency medical care.  New high bodied vans were needed to accommodate additional personnel and equipment.  Radios were installed in these vehicles, along with advanced equipment and medicines.
Today, ambulances and rescue squads come in many varieties, shapes and sizes. The simplest designs are equipped to provide basic life support while the larger more sophisticated designs  provide more advanced life support.  These are operated by private companies, hospitals and  local fire or police departments.
Life has changed drastically over the years taking us from bucket brigades to put out fires and hearses to transport the sick and injured to the high quality, efficient and well equipped, highly trained services we have today.
(Thanks to Harold Rediske Jr. for his assistance with this article.)