Officer of the Year and promotions in Police Department

By : thewaynedispatch
Comment: Off
Tag: Sergeant Jordan Arndt was recognized as the Wayne Police Department’s 2021 Police Officer of the Year. 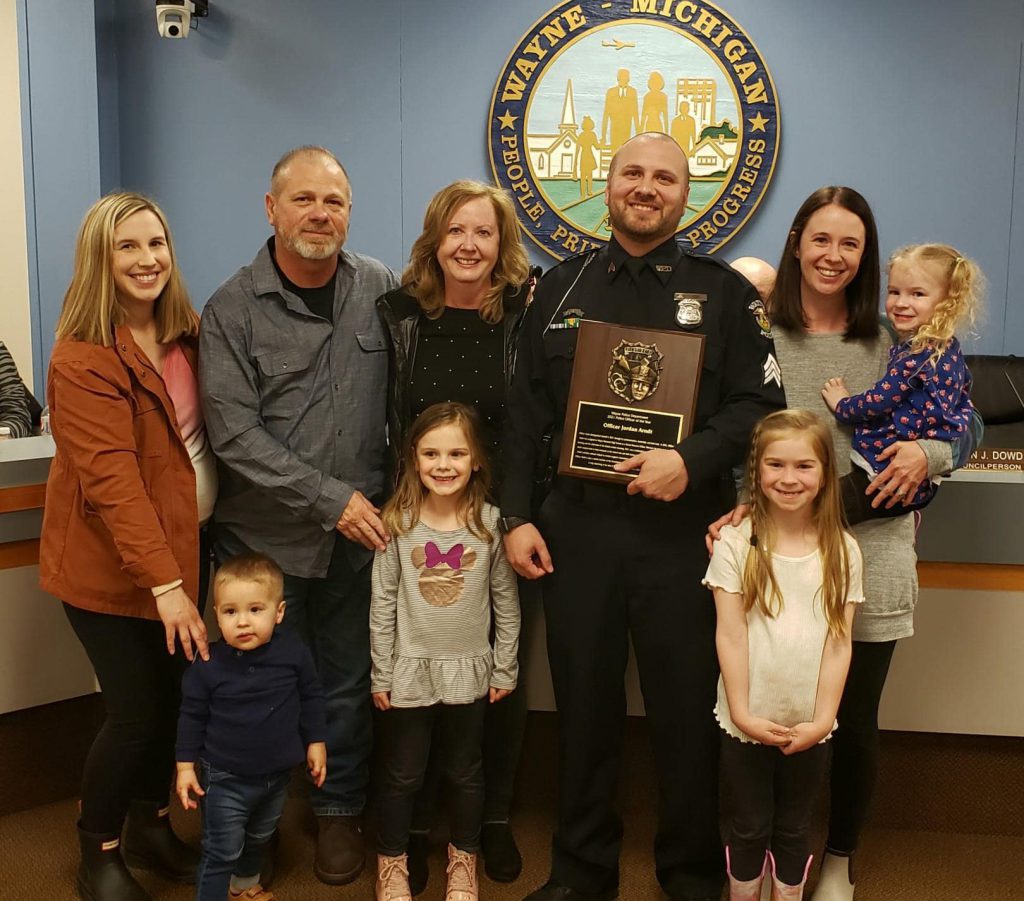 By Sarah Shurge – On May 3rd at the City of Wayne’s Council meeting, Sergeant Jordan Arndt was recognized as the Wayne Police Department’s 2021 Police Officer of the Year.
Each year the Wayne Police Department’s Awards Committee – which consists of patrol officers, command officers, and the police chief – meets to select a Police Officer of the Year Award recipient as well as other individual awards for exemplary service.
“Sgt. Arndt was unanimously voted across the board,” said Wayne Police Chief Ryan Strong. “As police chief, it’s great to have him abroad. He’s consistently positive and has a strong sense of integrity.”
Sgt. Arndt was nominated and selected as Officer of the Year for his hard work, positive attitude, and outstanding job he did as School Resource Officer at Wayne Memorial High School.
“Unfortunately, a lot of younger people don’t have good things to say about the police but they haven’t had any personal experience with the police, just from things they’ve seen on the internet. So being at the high school, their first impression for the police could be with me,” said Sgt. Arndt.
During his three years of service at Wayne High, Sgt. Arndt reversed some negative perceptions students might have had about law enforcement.
“Positive energy is the best part about him as both a person and a police officer,” said Chief Strong. “He’s really good at talking to people and he showed students and staff that police officers are human beings just like everyone else.”
As the School Resource Officer, Sgt. Arndt also helped students and staff feel safe during the return to in person learning and in the aftermath of the Oxford shooting.
“It was really about breaking barriers. I would hang out with the kids and they would come up and say ‘you’re the first cool cop I’ve met’ but they’ve never met a cop before me,” said Sgt. Arndt. “I wanted them to see the person behind the uniform. Be more of a person, a human, not just the police.”
Arndt finished his services as the School Resource Officer and on May 2nd, Arndt was promoted to Sergeant. “Being promoted was bittersweet,” said Sgt. Arndt. “It feels huge. This is something I applied for a couple times so I was really excited to get it this time. I try my best everytime I go to work. But I was sad to leave the school and the kids were crying that I was leaving.”
Due to Sgt. Arndt’s promotion, Officer Williams will be taking over at Wayne Memorial High School.
Sgt. Arndt has been at the Wayne Police Department for seven years in August. Throughout his time at the Wayne Police Department, he has also received an Opioid Life Saving Award, a Safe Driving Award, a few Accommodations and Chief Commendations.
Along with Sgt. Arndt’s promotion, the Wayne Police Department also announced a few other promotions recently. Matthew Whalen and Chad Colwell were both promoted to Sergeant.
Sgt. Whalen is a veteran member of the police department and has served in many capacities including Field Training Officer, Defensive Tactics Instructor, Mobile Field Force consortium member, and Taser instructor.
Sgt. Colwell has served at the Wayne Police Department in the Patrol Division, as a Field Training Officer, a rifle team member, and most recently as a Detective in the Investigation’s Bureau.
Robert Amore was recently promoted to the rank of Lieutenant. Lieutenant Amore is a 17-year veteran of the Wayne Police Department, a traffic crash reconstructionist, the Western Wayne Crash Response Team Commander, and a Taser and Speed Measurement instructor.
Along with the promotions within the Wayne Police Department, also came retirements. Lieutenant Kevin Schmidtke retired after 21 years of service, Sergeant Stephanie Strasser retired after 25 years of service (the first female to retire from the Wayne Police Department), and Sergeant Abraham Hughes after 20 years of service.
The Wayne Police Department also announced that Officer Devonte Rhodes graduated from the Wayne County Regional Police Academy on May 18th. Officer Rhodes will begin orientation and field training soon.
“I’m honored to lead the department and proud of everyone’s accomplishments. They are all well deserved,” said Chief Strong.
For more information about the Wayne Police Department, visit www.ci.wayne.mi.us/index.php/police-dept or you can find them on Facebook by searching City of Wayne, Michigan Police Department.

Wayne pride shows in Class of 2022