Police recognize Officer of the Year 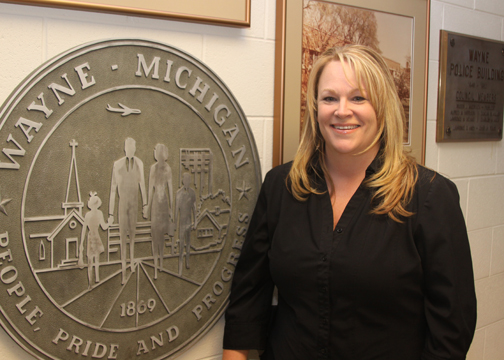 Her peers recognized Stephanie Strasser, a 17-year veteran of the Wayne Police Department as Officer of the Year.
She began her career with the Wayne Police Department in June 1997 and was a patrol officer until March 2013 when she was promoted to the detective bureau.
“It is different. It is more investigating,” she said. The Detective Bureau investigates all felonies and the detectives handle multiple open cases at a time. “Several times during the week you will get new cases.”
The job of the detectives includes going out on the scenes, taking photographs and interviewing witnesses and suspects.
“It is completely different than the road. I did road patrol for 15 and a half years.  I like this better but I miss the road,” she said.
Police Chief Jason Wright said, “Stephanie, number one is truly a leader amongst her peers. She has a tremendous  amount of experience.  She is a phenomenal detective.”
The detective bureau used to have seven people and it is now down to three.
“Her experience on the job is really showing in that role. She is very innovative and creative and she is relentless in her cases. She resolves a lot of her cases,” he said.
One of the cases Strasser worked on was the robbery at Leo’s Jewelry in July 2013. A third suspect was recently charged in the crime.
“The guys on the road did a great job with Leo’s. They arrested two people and I was able to get another suspect and she just pled out guilty to larceny,” Strasser said.
Strasser grew up and still lives in Wayne County and graduated from the police academy in 1996.
Her father was a trooper for Michigan State Police for 25 years. He also worked in the crime lab in Northville.
“So I grew up with it. We were in the crime lab quite a bit. He did some great cases,” she said.
What does she like about her job?
“It is a great group of guys over the years and it has been a great department to work for. It’s a close knit group,” she said. “Everyone here is making a difference. The guys on the road are the backbone of the investigation. All of us here are really stepping it up. The guys on the road are doing a great job. A lot of what I do is because of what they do.”
Wright said, “She represents the department well. She is very deserving of this. This has been a tough year and I know the caliber of work she has been doing.”
Strasser will be recognized at an upcoming city council meeting.