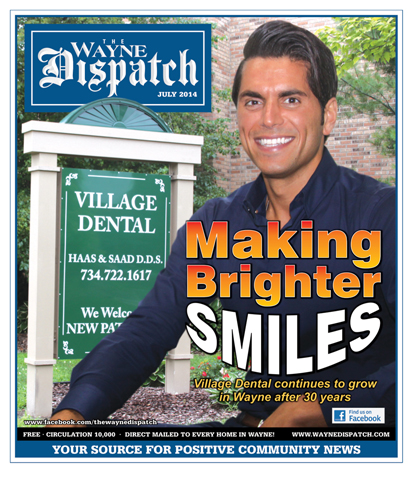 By Jenny Johnson – Businesses in Wayne are thriving! For more than 30 years Village Dental, 35100 E. Michigan Avenue, has been part of the Wayne community. Dr. Mohamed Saad joined Dr. Mark Haas in the practice in January 2012. “I didn’t like hearing that the economy in Michigan was in a downturn,” Saad said. “I took a different approach and decided to think positively about things. I went office-to-office and city-to-city until I found what I was looking for. I walked in here one day.” Saad said he was impressed with Dr. Haas’ practice and long-time commitment to the community. Over the years Haas bought four different dental practices. Combined they have about 100 years of practicing in Wayne. “Here is a business in downtown Wayne that is growing. Wayne is up and coming again,” he said. Village Dental has about 2,000 active patients, and growing at a exceptional rate, who come from Wayne, Westland, Romulus, Canton, Plymouth, Northville and Birmingham. “A lot of patients grew up in Wayne and moved out but come back here,” he said. Saad grew up in Dearborn and his father worked at The Wayne Assembly plant. He received his bachelor’s degree from the University of Michigan and earned his doctorate from the University of Michigan School of Dentistry. Saad worked with cosmetic dentists in New York and Los Angeles to develop his skill for aesthetic dentistry, which includes veneers and Zoom whitening. He was awarded the Top Dentist Award for 2013 from Consumer Research of America and Top Dentist for 2013 and 2014 in Detroit Hour. He grew up in Dearborn and is the youngest of five children.  His oldest brother is a nationally recognized cosmetic dentist and his other brother is a medical resident.  His two sisters are teachers. “My parents gave us opportunity and we ran with it. We are fortunate,” he said. Saad said he always knew he wanted to be a positive influence in his professional career. Village Dental has been active members of the community by not only serving many of the residents of Wayne but also sponsoring events like the Kelly Miller Circus. In addition Dr. Saad serves on the Downtown Development Authority. “On the DDA committee I really want to help revitalize the city. I am part of the city now and own the practice,” he said.  “Community is from commune which means being together. Let’s come up with a solution and not just talk about the problem.” Saad sees a bright future for Wayne. “The whole idea is creating a buzz and a vibe,” he said.  “We sponsored the circus last year just to give back to the city. I want the city to grow. If everything in the area is growing you are growing. I want people from everywhere to come here. ” Saad said The Wayne Ripple Effect and Main Street are a great addition to Wayne. “Main Street is great. They picked three cities in the state,” he said.  “We have to do whatever it takes to revitalize Wayne.” Other cities with downtowns like Birmingham, Royal Oak and Ann Arbor draw people from all over. He said they have a lot of family oriented activities. In the past 10 years Royal Oak has increased their downtown area with additional outdoor seating at restaurants and more walking traffic. You want kids to grow up in the city, go away to college and then come back to where they grew up. That’s what I did.” Saad said every city in Michigan got hit during the economic downturn in 2008. The city of Dearborn used to have a Ritz Carlton, Saks, and Lord and Taylor. But they are coming back. “Fairlane Mall is trying to revitalize and has added some new restaurants. You have to try,” Saad said. Downtown Detroit got hit and they are currently operating under an emergency financial manager. “They have attractions and a reason to go downtown. They are creating a buzz,” he said. They have a Whole Foods and are breaking ground on their second Meijer within the city limits. “If they can do it, Wayne can do it,” he said. One built in attraction Wayne has that other downtowns don’t is the Rouge River. “Why not get Dairy Queen and sit by the river? “ he asked. “You need an influx. You need a change. The money will always come if you are passionate about something. I don’t have one way of doing things but I am not afraid to try.” Doing nothing can be worse than trying something new, he said. He knows McDonald’s coming to Wayne has created some controversy in the community. But McDonald’s did their research and analyzed the data before they decided to come to Wayne. They think they will be successful. “I don’t have all the answers but I want to try to help figure out ways to attract from outside the city to the city. We have to revitalize Wayne to bring people from other areas. We have to give them a reason to come here,” he said. Village Dental prides itself on pain-free dentistry. They are happy to welcome new patients. They do general dentistry like cleanings, fillings, crowns, root canals, bridges, partials and dentures. They also do aesthetic dentistry like veneers, Zoom whitening and full mouth reconstructions. They have recently taken on a new associate Dr. Shadi Krecht, a great addition to the practice and growth of Wayne, and they have a staff of eight ready to help. Call them today at 734-722-1617.  Accepting New Patients.

Police recognize Officer of the Year