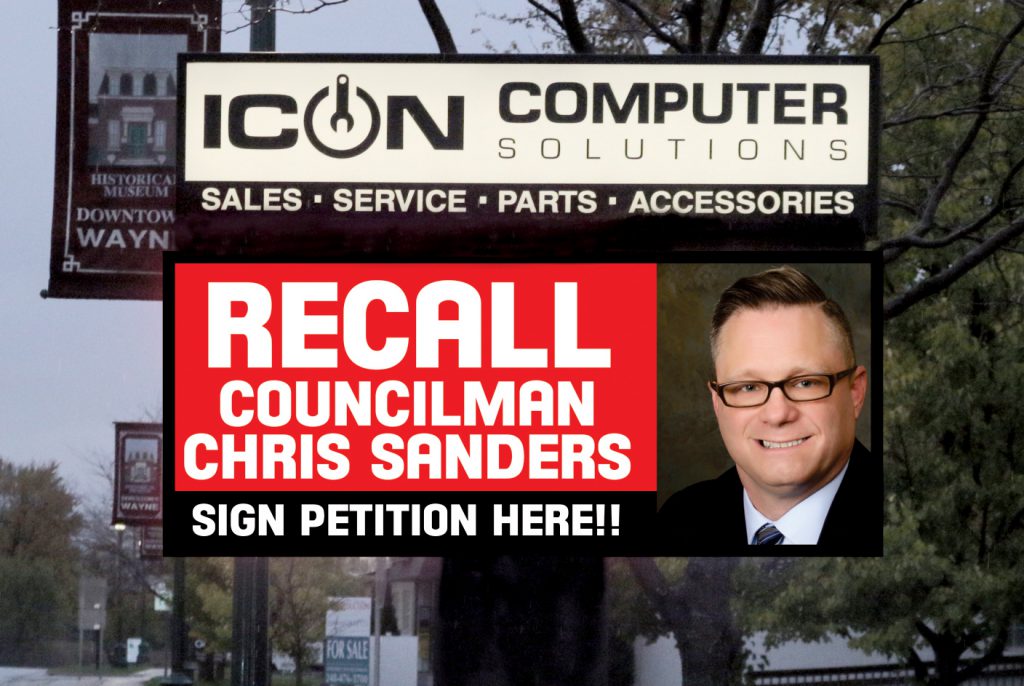 By Carolyn Marnon – “Step down, Sanders!”
“Just resign, Chris!”
Attendees at Wayne City Council meetings have been shouting these phrases or ones similar to it for more than a few months as they try to encourage Councilman Chris Sanders to resign his council position due to behavior they find unethical for someone who represents the citizens of Wayne.
While Concerts in the Park were going on this past summer, all Bob Boertje heard were people talking about getting certain councilmembers recalled. It was a hot topic, but much like the childhood game of Hot Potato, no one wanted to be left holding the potato.
That all changed July 18 when Bob was at a council meeting and heard Westland resident Brian Duka address the council about his 10-year friendship with Councilman Sanders and what Councilman Sanders had written to him in a text message. The text message says “As you know, I am on the Wayne City Council. We have a City Manager form of government, which means our city manager runs the day to day operation of the city. Essentially, at last night’s council meeting, I put her on blast, calling her out for all of her back door dealings, dishonesty with residents. Her uncouth behaviors, her President Underwood (of House of Cards) style of manipulative behaviors. I also called out the inability of two council persons and the Mayor’s ability to see it happening. This city manager, who used to work for Kwame Kilpatrick, has a certain amount of loyal followers. We need to end her contract as city manager. We need one more vote on council to do so. I need you to act like you live in the city of Wayne and calling on the council to do the right thing. You might even want to Stick in there that councilman Sanders is the only one that has the courage to speak truth to power. Lol. I DESPERATELY NEED YOUR HELP TO MOVE THE DIAL. Trust me when I say this woman is DANGEROUS! Please help me and my two colleagues. The mayor’s name is Susan Rowe her email address is srowe@cityofwayne.com. Councilman Tom Porter can be reached at tporter@cityofwayne.com and Councilman Terry Sutton can be emailed at rsutton@cityofwayne.com. Please send them all separately to each of them and blind copy me so I know that they got them. The next meeting is two weeks from yesterday. PLEASE HELP US RESTORE INTEGRITY. THANKS my email address is csanders@cityofwayne.com.”
The statement, “help us restore integrity” was the statement that hooked Bob into taking action and filing the recall petitions for the Mayor and three councilmembers. Bob wonders how you can ask people to restore integrity when you lie. Bob also talked about a letter that was written by Colin Clark to the city that said he voted religiously for 20 years and lived on Currier St. Bob did a FOIA (Freedom of Information Act) request on Clark’s voting record. It turned out there is no voter registered with that name on Currier Street and there is no one with that name who voted in Wayne elections. It is speculated that this letter was actually written by a councilmember. 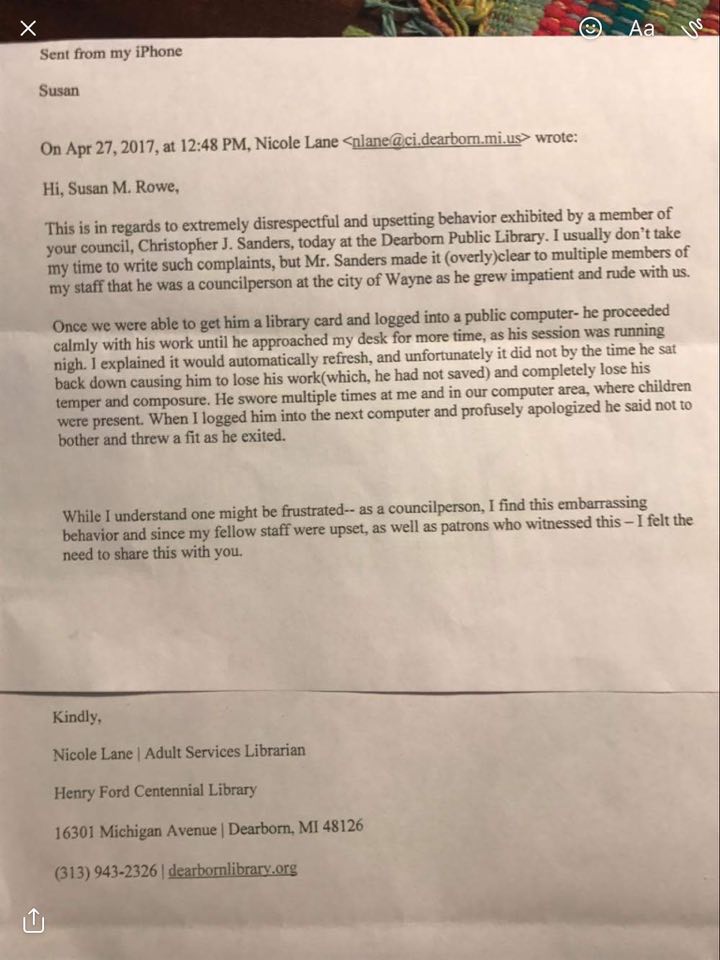 Bob filed eight recall petitions at the end of August. Six of those were against Councilman Sanders for various reasons-the message to Brian Duka, the disturbance by Councilman Sanders in the Dearborn Public Library, the threat he made to the Mayor over litigation, that he kept his personal relationship with Councilman Gabriel and former Councilman Sutton secret, that he failed to represent the city in a professional manner with inappropriate dress, and that he voted to extend councilmember’s terms preventing the voter-approved ward system from being fully implemented in November, 2017. The other petitions were against Mayor ProTem Tony Miller and Councilman Ryan Gabriel.
Because the petitions lacked clarity and were too wordy, they were not approved. Bob had to reword the petitions and resubmit. The second time, he submitted only four petitions to recall Mayor Rowe, Mayor ProTem Miller and Councilmen Sanders and Gabriel. The approved petitions state the recall is because the individuals “voted to extend the council members term by one year on October 18, 2016.
If the terms had not been extended, Wayne would have had an election this month to fill Wards 4, 5 and 6. Two of those who voted to extend their terms were appointed to their positions; they were not voted in by the citizens.
Now that the petitions have been filed and the language cleared, Bob and a group of 12-15 Wayne residents are out collecting signatures. They have 180 days to collect 1,183 signatures. Those signatures have to be collected within a 60 day time frame within those 180 days. Bob is hoping that they will be able to obtain all the signatures needed by December 3. The signature campaign is picking up steam; about 25% of the signatures have been obtained.
Why 1,183 signatures? The number is based on the most recent governor’s election. You must get 25% of those votes. 4,729 Wayne residents voted in that last election; 25% of that is 1,183.
Once the signatures are collected and verified, the issue is put on the ballot in May 2018. The recalled person could still run in the election. Bob says there are people already in place to run against the recallees. If elected, those individuals would then fulfill the remaining term’s six months.
Bob acknowledges that council voted to extend terms to save the city money, but other conduct by council has not helped to bring money in. Councilman Sanders, Miller and Gabriel voted to not sell the WABC building on Wayne Rd and Sims for $150,000 last year. That sale would have filled a vacant building and put it on the tax rolls. “This recall is the last resort by citizens who feel there needs to be change,” says Bob.
Concerned citizens are walking through the city on evenings to gather signatures. Each weekend, they are targeting a ward to concentrate on. Petitions are available for signing at Icon Computer Solutions, 35858 Michigan Avenue during business hours Monday-Friday 10:00 a.m.-7:00 p.m. and 10:00 a.m.-5:00 p.m. on Saturday.
Some individuals have announced on social media, like the Wayne Neighbors Discussion Board Facebook page, that they will be out at certain locations during certain times. The petitions will also be available at city council meetings. You can sign all four or you can sign one, two or three.
Owner of Icon Computer Solutions Brian Ewanciw says, “The city can and will get better after personal agendas are removed from council. If council truly wants to save the city money, then they should resign so we don’t have to spend the money to remove them. That’s what the residents of Wayne have been asking for months.”
Bob Boertje will continue to fight for the city he loves and do what he can to get rid of dirty politics.