Second time is a charm for Buddy Up 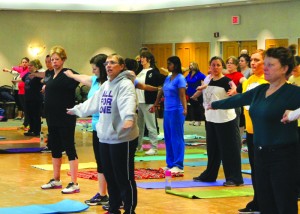 Buddy Up 2.0 is a free health program led by Buddy Shuh that is helping more than 400 people on their journey to physical and spiritual health. 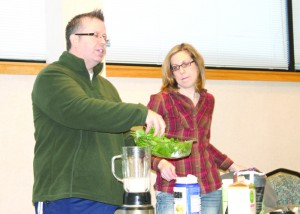 Buddy and Shelby Shuh made Spinach Sorbet for participants. There is a 30-minute exercise portion every week.

Buddy Shuh – Yes we can!  But it does take a community. Is it possible for local city government, businesses, churches, a hospital, and people who live in the community to all join forces for a common cause? It sure is! I am currently witnessing it through the Buddy Up 2.0 health program. The cities of Wayne and Westland have partnered with St. Mary Mercy Hospital, along with the others to help people lose weight and get healthy! Over 400 people have already participated this year. “The program had outstanding results last year! I know of at least 5 people that have lost and kept off 50 pounds or more since the start of the program in 2013. This year I expect even better results!” said Buddy Shuh. “(By) buddying up I’ve lost 70+ lbs and kept it off,” said James Edmonds. “Seeing everyone at the Wayne Rec, most of all my support group, like all of the captains, we have formed a great small family. We love to work out together and now help people achieve what we have achieved buddying up.” “I was involved with the Buddy Up program last year. I was at a point in my journey, after losing 65 pounds, where I was just about to give up. Buddy talked to us about his time on the Biggest Loser ranch and climbing the mountain. I felt as though he was talking to me. With that I continued on my journey and kept the weight off. This year I am participating as a Captain. I have 14 people on my team and I hope I am able to do for them what Buddy did for me last year to keep them on their path. I plan to continue on with my group even after the program is over,” said Sandi Franka. This year, two changes were implemented that have drastically improved the success people are having. The first improvement is the formation of teams with captains. Participants have about 10 teammates with them and a captain to help and encourage them. The small group support has been a great encouragement so far!  “Buddy Up is more than just a weight loss program. It is a motivational and inspirational family of people that have one interest in mind, getting healthy. Who says you have to do that alone?” said David Koester. Stephanie Monroe said, “Buddy Up is changing lives! Buddy has reached out to his community to offer change. We have accepted what he brings and have the opportunity to not only change ourselves but others around us! I am so thankful to Buddy Shuh, Mayor Wild and St. Mary Mercy Hospital for continuing this amazing program!” Kathy Hansen said, “The part I love most about this program is that it’s real. There are no people preaching to you on what to do and not doing it themselves. We are all together on this journey. I am thrilled to be a captain this year and be able to lead others on the path I have begun. Weight loss is a group effort.”  Shuh said, “The second improvement to the Buddy Up program came in the form of a challenge. On day one of the program, I challenged everyone to swim 2.6 miles, bike 112 miles, and walk or run 26.2 miles. Participants have six weeks to complete the challenge. Those who complete the triathlon will receive a t-shirt that says “I tri-ed.” Many are aggressively attacking this challenge!”

The Buddy Up program is part of Westland Mayor Bill Wild’s “Passport to a Healthy City” campaign. This free program creates a community for people to join together and get healthy. Buddy Up 2.0 is a seven -week program. Every Saturday morning participants meet at the Friendship Center in Westland for a weigh in, a team meeting, an exercise portion and nutrition class. The event will culminate with a 5K run or walk or 1 mile Mayor’s Walk on March 8. “When I launched the Passport to a Healthy City campaign my goal was to inspire and encourage Westland residents to work towards a healthier lifestyle through education, diet and exercise. We are lucky to have Buddy Shuh as a role model in the campaign, leading our citizens by example,” said Mayor Wild. Wayne resident Buddy Shuh was a contestant from season 13 of NBC’s “Biggest Loser.” When he returned home he decided he wanted to help give the gift of health to his community.  “Buddy Shuh has used the principles he learned on The Biggest Loser and applied them to help people within his community,” said Kari Ritter. “He has been a blessing to us all who have attended the Buddy Up program; who have in turn started to help others.” Each week Buddy not only has nutritional information to share but also gives Buddy Uppers real advice on how to reach their goals.  “My favorite thing that has stuck with me is when Buddy said ‘Don’t look at this as a diet but rather as a change of how you live and eat.’ I spent years on “diets” and never succeeded but when I started looking at it as changing my life it made a huge difference!” said Sue Federspill.