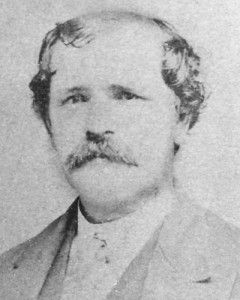 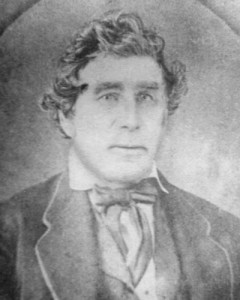 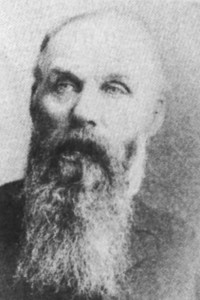 By Darlene Hawley – Since a cemetery is a time capsule of years gone by and a recording of our ancestors and those who lived in our community long ago, we can learn about the past by exploring the tombstones of those buried there.  Last month I wrote about how our cemetery came to be and some of the men, women and children who lived in early Wayne and were buried there.  This month, I would like to share information about some of the business men that helped build our community and serve the people of the area.  Many of the men of the 19th century in Wayne were entrepreneurs and skilled tradesmen.  Jacob D. Bunting, originally from Pennsylvania, was sent to the Wayne area from Detroit by the Michigan Central Railroad, but soon went to work for the Wright family at their General Store.  He took over the business in 1852 and brought his son John to work for him.  John later ran the store until it burned in 1907.  J.D. Bunting was appointed Postmaster in 1852, ran a nursery business with Ammon Brown and Norman Cutting in the 1860s and was one of the first trustees of the new Village of Wayne in 1869.  He is buried in the Old Wayne Cemetery along with his wife Maria E. (Kreider) Bunting and their three children, Sarah, Charley and Mary.
William R. Corlett was born in New York in 1830.  He came to Wayne where he made his mark on the 19th century.  He was an inn keeper in town in 1860 with his second wife Harriet.  He had lost his first wife, Eliza, along with an infant daughter also named Eliza in 1855.  He and Harriet had three daughters named Maggie, Florence and Ella.  In 1869, Mr. Corlett became the first president of the Village of Wayne.  He was re-elected in 1876, 1879 and 1890.  He held the position of Postmaster in 1883 and ran a general store in town.  William R. Corlett died in 1900 and was buried in the Old Wayne Cemetery along with his first and second wives and four daughters.
Ezra Derby, one of our earliest settlers buried in our cemetery and who early Wayne was named after (Derby’s Corners), built a saw mill and a blacksmith shop in Wayne.  It was located near where the Wayne Historical Museum stands today.  Henry “Harry” Kilborn took over the blacksmith shop and served as the town blacksmith for over 50 years.  It is not clear if he is buried in our cemetery but his two wives are.
James Johnson Houston was born in Pennsylvania and came to Wayne where he was a blacksmith from 1861 to 1892.  He and his wife, Sarah Elizabeth (Myers) Houston, are buried in the Old Wayne Cemetery along with just two of their ten children.
Wayne played a part in the Civil War as many communities did in the 1860s.  The Congregational Church gathered volunteers to make bandages for wounded soldiers and some people were a part of the Underground Railroad.  Many of the young men in our community went off to fight in the war that divided our country.  Thirteen of those men are memorialized with markers in our old Wayne Cemetery.  Giles Collins, stepson of town founder Ezra Derby, enlisted in 1862 at the age of 32 and fought with Company 1 of the 2nd Cavalry Regiment of Michigan.
Christian Fargo enlisted in Nankin Township in 1864 at the age of 17.  His father Henry had died of disease two years earlier while fighting for the Union at Bowling Green, Kentucky.  Christian came home after the war to live with his mother and work on the railroad until his death in 1873.
William Houston fought alongside his brother Almon at the Battle of Gettysburg.  He died in battle but Almon was wounded, captured and sent to Andersonville Prison.
Alvin Hubbard fought for almost four years, lost his right leg in battle in Spotsylvania before returning home to become a jeweler in Nankin.
Edward M. Hume, son of a doctor in town, enlisted in 1862 and fought until he was wounded and discharged in 1863.
Dr. Thomas Morrison, a Scottish immigrant, used his medical skills as a surgeon with assorted regiments for the Union from May 1864 until May 1865.
Othniel Temple enlisted in 1864 at the age of 44.  After the war he settled in the Nankin area and worked as a saloon keeper.
Lenden Almon Mason fought with the Navy and passed away in 1865 at a hospital in Memphis, Tennessee.
Charles Peters fought in the last months of the war enlisting in 1865 at the age of 18.
Other soldiers buried in our cemetery were John Coates, Jacob Farley, John Guest and John Leng.
Learn more about the people buried in our cemetery next month when I write about early physicians in our community and the melting pot that Wayne was.  Material for this article was taken from “A Guide to the Old Wayne Cemetery” printed by the Community Development Department of the City of Wayne.