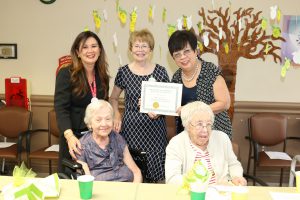 By Carolyn Marnon – “The Spirit of America” bonds nursing home residents, volunteers, caregivers and staff as they work together each day to encourage independent living for the residents and patients at Maple Manor Rehab Center here in Wayne. To celebrate National Nursing Home Week (held May 14-20 this year), the staff at Maple Manor put together an afternoon celebration for residents to enjoy.
As the residents slowly gathered in the dining room, bright yellow, green and white balloons on strings swayed in the breeze as they decorated each yellow or green tablecloth-strewn table. The majority of residents rolled up to their tables, but a few walked with the assistance of their walkers. There was a lemon tree displayed at the back of the room. The trunk of the tree and branches were drawn on the wall while lemons with the names of residents hung down from the ceiling. The theme of the celebration-“Lemon Up.”
Once Mayor Susan Rowe arrived, opening remarks were made by Anna Duba, who orchestrated the event. She spoke about May being “Older American’s Month” since 1963. Every year, a theme is chosen for nursing homes all over to use as they unite to celebrate the older Americans in their care. Mayor Rowe spoke briefly before the room filled with voices singing “Lemon Tree Song,” the lyrics having been printed and placed at each table and chair.
A resident named Cookie was praised because she was wearing yellow to match the lemon-theme. Residents had been asked to wear yellow.  Cookie commented that she wore yellow because it was her favorite color.
The stated goal of Older American’s Month is to provide enrichment for residents and their families. It is also to assist the elderly in living life to the fullest. However, this is a goal that Maple Manor pursues every day. While helpers passed out lemon treats which included lemon pie, lemon bars, lemon cookies and lemonade, seven staff members volunteered to take part in a “fun” contest. Once they were seated at a table in the front of the room facing the audience, they were given bottles of water and told they would be eating lemons. The three staff members who had the least sour faces while they were eating the lemons, judged by the residents, would win a prize basket of lemon-themed items. Loretta finished her lemons first without a second thought and won the first basket. Rowena was handed the second basket and Chef Jeff took home the third. As he headed back to the kitchen, Jeff was heard to say, “Yeah, I won!” while hoisting his basket in the air.
Anna Duba reported that Maple Manor has a social worker on staff that works with residents to maintain their independence. Independence is very important to people. There are outings and shopping trips planned.  Groups come to Maple Manor to provide support and entertainment.
Maple Manor has been offering rehabilitation services and long-term care for 13 years. There are 59 rehab beds and 32 assisted and independent living apartments. There is a mixture of permanent residents living with those who are there temporarily for help rehabilitating after surgeries such as knee replacements, hip replacements, etc. Maple Manor is located at 3999 Venoy Rd in Wayne.