Serving lunch to those who serve 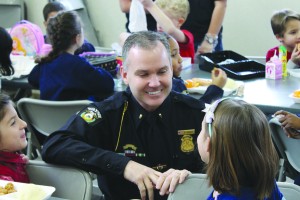 By Jenny Johnson –
They eagerly stood at the door waiting to greet their guests. The Student Council at St. Mary Catholic Church was excited to welcome the Wayne Police and Wayne-Westland Fire Department to their school for the second annual “Bagged Lunch.”
Even with being postponed because of a snow day, the luncheon was a success.
The Student Council made up of sixth, seventh and eighth grade students, hosted the event as part of Catholic School Week, which was celebrated Jan. 26 to Feb. 1. This year’s theme is Catholic Schools: Communities of Faith, Knowledge and Ser-vice.
After the great turnout for last year’s luncheon the Student Council decided this was something they wanted to do again. This is their biggest community service project of the year.
Morgan Smith, an eighth grader and Student Council secretary, said “We are honoring them for all they do.”
“We want to thank them for all they do. They serve us every day so we wanted to serve them,” said Hannah Dinnell, an eighth grader and Student Council vice president.
They held bake sales and sold Tootsie Pops to raise money to treat the City of Wayne police officers and firefighters to lunch. They raised about $200.
On the menu was a bagged lunch with a sub from Tim Hortons, chips, a cookie and soup, with water, coffee or hot chocolate.
The police officers and firefighters sat with the students in the lunchroom and mingled with the students.
“It’s great for students to interact with the police,” Hannah said.
In addition to lunch the police officers and firefighters were offered student-led tours of the school.
“They get a chance to see what Catholic school is like,” Morgan said.
The students were thrilled to get to eat lunch with their guests and ask them questions about their job.
Kindergarten student Bethany asked Police Chief Jason Wright if he had handcuffs.
Another student asked Officer Abe Hughes if he had a gun and other students asked how old the officers are and if they catch the bad guys.
Mayor Al Haidous and Acting City Manager Ramzi Gharib also joined the students for lunch.