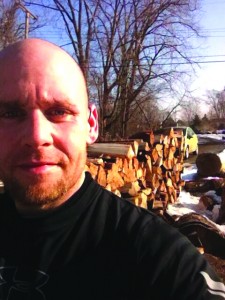 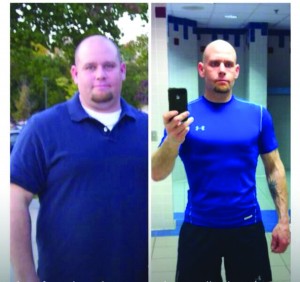 Jason Hood will compete in the Death Race- a 48+ hour endurance race that mentally and physically challenges competitors.

Jason Hood doesn’t have a death wish but he is competing in the Death Race.  Billed as part Survivor and part Jackass the 48-70 hour outdoor race will start on June 27 in the woods in Vermont.
“I found out just searching different obstacle races online and came across the Spartan Race series,” he said. Hood grew up in Westland but moved to Wayne after high school. Since 1994 he and his wife have lived in Wayne and raised their seven children.
Hood has a couple of good reasons for doing the Death Race.
“First my son is in the Army deployed to Afghanistan with the 10th Mountain division. He is part of Task Force Spartan 3BCT10MTN. His unit is on the final deployment for this brigade who will be deactivated due to budget cuts,” he said. “ It’s an historic deployment and I’m so proud he gets to be a part of it. I feel that by doing a race of this caliber it would be an honor to him especially since he is a true Spartan.”
The second reason is, “I want to do it for myself as a personal test to really see what my limits are mentally and physically. It has a very low success rate of finishers, roughly 10-20%. I want to be one of them!”
The Death Race allows 300 elite athletes to take them out of their comfort zones and challenge themselves to their ultimate limit. It is designed to present competitors with the unexpected and test them both mentally and physically.
The obstacle and challenge-driven race requires competitors to complete numerous grueling mental and physical challenges throughout a 40-mile course. Competitors may be asked to chop wood for two hours; complete a 30-mile hike with rocks and weighted packs; build a fire from scratch; cut a bushel of onions; or after 24-hours of racing, memorize the names of the first 10 U.S. Presidents or a Bible verse, hike to the top of a mountain and recite them back in order. If they miss a word they have to do it again.
Unlike other endurance races that offer a detailed map, Death Racers have no idea what to expect next as the course map and list of challenges are kept secret.
“Just like life, the Death Race is designed to push and aggravate people to such a point that even the most stoic eventually fail,” said Joe De Sena, co-Founder of the Death Race and the Reebok Spartan Race Founder.  “Only those people possessing incredible discipline under the most insane and even delusional circumstances can call themselves a finisher.  These athletes are willing to complete the journey at all costs.  The fact that people endured for 70 hours to see what they are made of, is just remarkable and awe-inspiring.” While this is the first time he will do this competition he has competed in a Tough Mudder, 5K races, 10k’s, half-marathon, and he will be doing a full marathon in April.
His physical training consists of lots of distance running, carrying heavy objects for distance, chopping wood, exercising in all inclement weather, cross-fit style workouts and practicing sleep deprivation. Mentally he meditates and practices breathing exercises.
He is also preparing for what he will take to the race.
“I can take whatever I think I need to survive for a week in the woods, changes of clothes, food, splitting axe, five gallon bucket, headlamp, basic survival kit,” he said. “The race does require a list of mandatory items to bring and that list usually goes out to all a week before the race, it’s unknown until then. The rule is what you bring must be carried the entire race, average weight is 50-70 lbs of gear.”
What makes the race intriguing is that no one knows what to expect.
“Past races have had people carry logs up and down the mountain, lift heavy stones for hours on end, crawl through barbed-wire culverts, translate Greek writings, climb to the top of a mountain to look at a block of Legos put together in a certain order and then have to swim to the bottom of a pond and retrieve a bag of Legos to assemble the same way and then have to repeat the task if not done correctly,” he said.
With the odds stacked against him what does Hood hope for from the Death Race?
“To be an official finisher and be awarded the coveted DEATH RACE SKULL so I can give it to my son when he returns from his deployment.”

A Celebration of Life

Serving lunch to those who serve