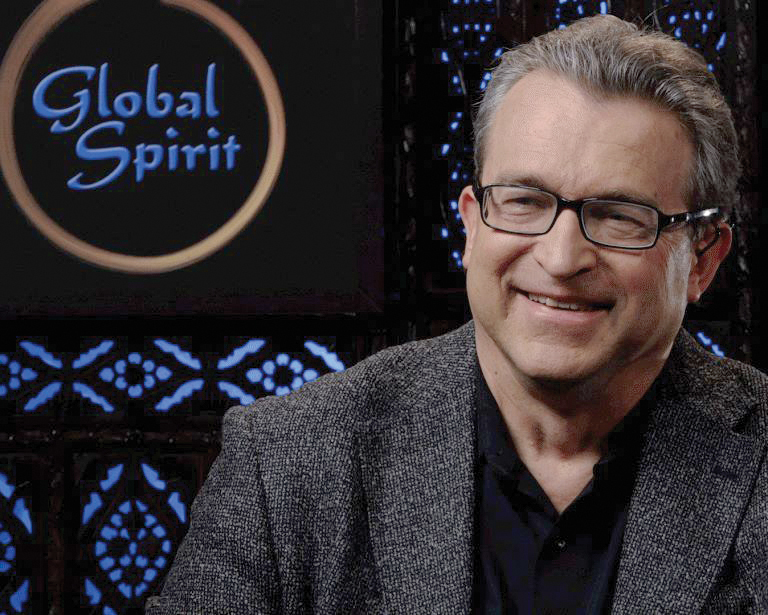 Phil Cousineau is host of his own show on PBS called Global Spirit. His most recent guest was Carlos Santana.

By Carolyn Marnon – “We’re gonna read books out loud as a family,” said Phil Cousineau’s dad after kicking their Philco TV down the stairs one day long ago. Phil was growing up on Eastlawn in Wayne where he eventually went on to graduate from St. Mary’s.
Phil’s dad worked in public relations at Ford Motor Company’s “Glass House” in Dearborn. Everywhere the Cousineau’s went became a history listen. “Did you know…?”
Now living in San Francisco, Phil is a prolific author with 19 books listed on his website philcous-ineau.com, many of which can be found at the Wayne library. He recently made an appearance at the Wayne Public Library to talk about his work and career at “Words, Wanderlust and Wayne.”
While guests were arriving at the library event, it was like a class reunion unfolding. Many of the attendees were classmates who came to reminisce with Phil. One of Phil’s English teachers appeared to see what must have been one of her favorite students. One of the class members shouted, “Cousineau, have you found yourself?” Phil replied, “I haven’t found myself, but I’m still looking.”
Growing up, Phil loved sports. He says most jocks don’t read, but he would play ball and frequent the library. While in high school at St. Mary’s, Phil covered sports for the yearbook. Roger Turner, editor of the former Wayne Dispatch, was looking for a sports reporter who could cover the local area. The principal asked the 17-year-old Phil if he was interested. At the interview, Roger, wearing a fedora with a cigar in his mouth blowing smoke and lounging back in his chair with his feet up on his desk asked Phil “So kid. Do you think you can write?”
Back in those days, papers were cut and pasted together. As a high school junior, Phil says he would call all the coaches for their scores and noted who their best players were. He’d have to write it up because he was taught there was “no story without the notes” and as his mentor Roger would say “Cousineau, it ain’t real till it’s ink.” That’s when Phil knew he wanted to write for the rest of his life.
While studying journalism at the University of Detroit, Phil worked in a steel factory. Authors like Bill Bonds, Joyce Carol Oates and Elmore Leonard would come speak in his classes, inspiring him further to pursue a career in writing and the arts.
After earning his degree (he thinks he is the first Cousineau to get one), Phil went off to Europe for three months to “see the world.” He found the art and literature in Europe fascinating and despite having a job as a cub reporter at the Detroit Free Press lined up and waiting for him upon his return, he decided to keep travelling. Europe had music, street cafes, art and much more that celebrated beauty. He says at the time, Detroit was considered the murder capital of the world. He didn’t have much interest in that.
“I’m never bored because I’m interested in everything,” exclaimed Phil. For the next seven years, Phil did construction work in California while reading a book a day. Opportunity came along for Phil to help write “The Hero’s Journey: The World of Joseph Campbell,” a documentary discussing the nature of the hero in mythology. “Over and over,” in his career says Phil, “I was in the right place at the right time.”
He would spend his days writing, reading and working, fitting in 3-4 hours sleep before starting all over again. “I came to love life. There’s so much out there.” He now has books, documentary films and has worked at movie studios, including Warner Brothers.
Phil currently hosts “Global Spirit,” a PBS series that explores global issues ranging from sacred music and spiritual activism, the search for ecstatic experience, forgiveness, and attitudes toward death and dying. Some of his guests have included Carlos Santana, Deepak Chopra, a prominent figure in the New Age movement, and Robert Thurman, an expert on Tibetan Buddhism (and father of actress Uma Thurman). 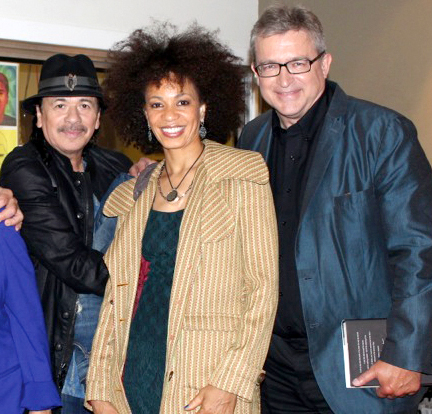 Phil makes it a practice to thank everyone who has helped him along. “It’s very important to be grateful for all the people who help us along,” he said.
Before his visit to Wayne, Phil spent the previous month as the 2019 Writer-in-Residence in Columbus Ohio at Thurber House, the historic home of author, humorist and New Yorker cartoonist James Thurber. Using this solid month, he worked on his book “Who Stole the Arms of Venus DeMilo?” an Indiana Jones type story covering art, mythology, sculpture and travel. During his residency he also did public events, met with local residents, and did readings.
In April, Phil will be leading an 11-day tour “La Dolce Vita: The Sweet Life of Mythic Italy” to experience the art and architecture of Italy.
According to Phil’s website, he has had other eclectic jobs including “playing semi-professional basketball in Europe, harvesting date trees on an Israeli kibbutz, painting 44 Victorian houses in San Francisco and teaching screenwriting at the American Film Institute.” He has also worked with The Doors drummer John Densmore on his autobiography “Riders on the Storm: My Life With Jim Morrison and The Doors.” At a book fair in 2003, he was promoting his book “The Olympic Odyssey” with Dr. Ruth at the table on his left and his boyhood hero Ray Bradbury at his right.
Phil appreciates that he has been able to write and tell stories for 50 years. With the Detroit work ethic in his bones, he is able to work 12-14 hours daily, inspired often and grateful for the lucky breaks he has had along his career journey. Books and libraries “teach you how to think for yourself,” said Phil.
From a small-town boy to international traveler to big city resident, Phil has many experiences to share. For more information, visit his website www.philcousineau.com or check out his books available at the library. 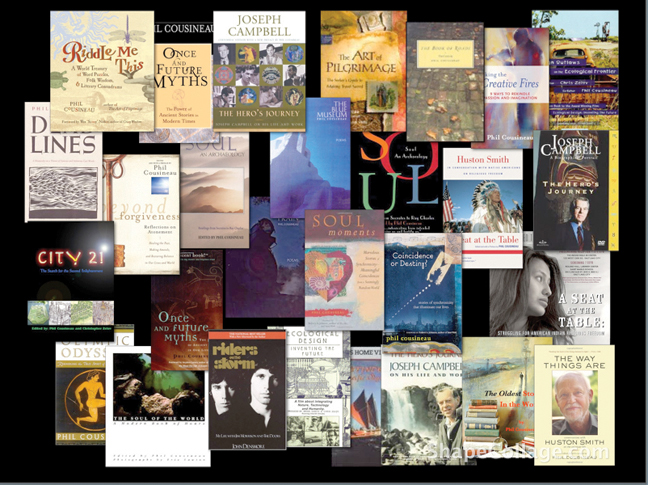 A montage of Phil Cousineau’s many books created by his wife, Jo Cousineau.