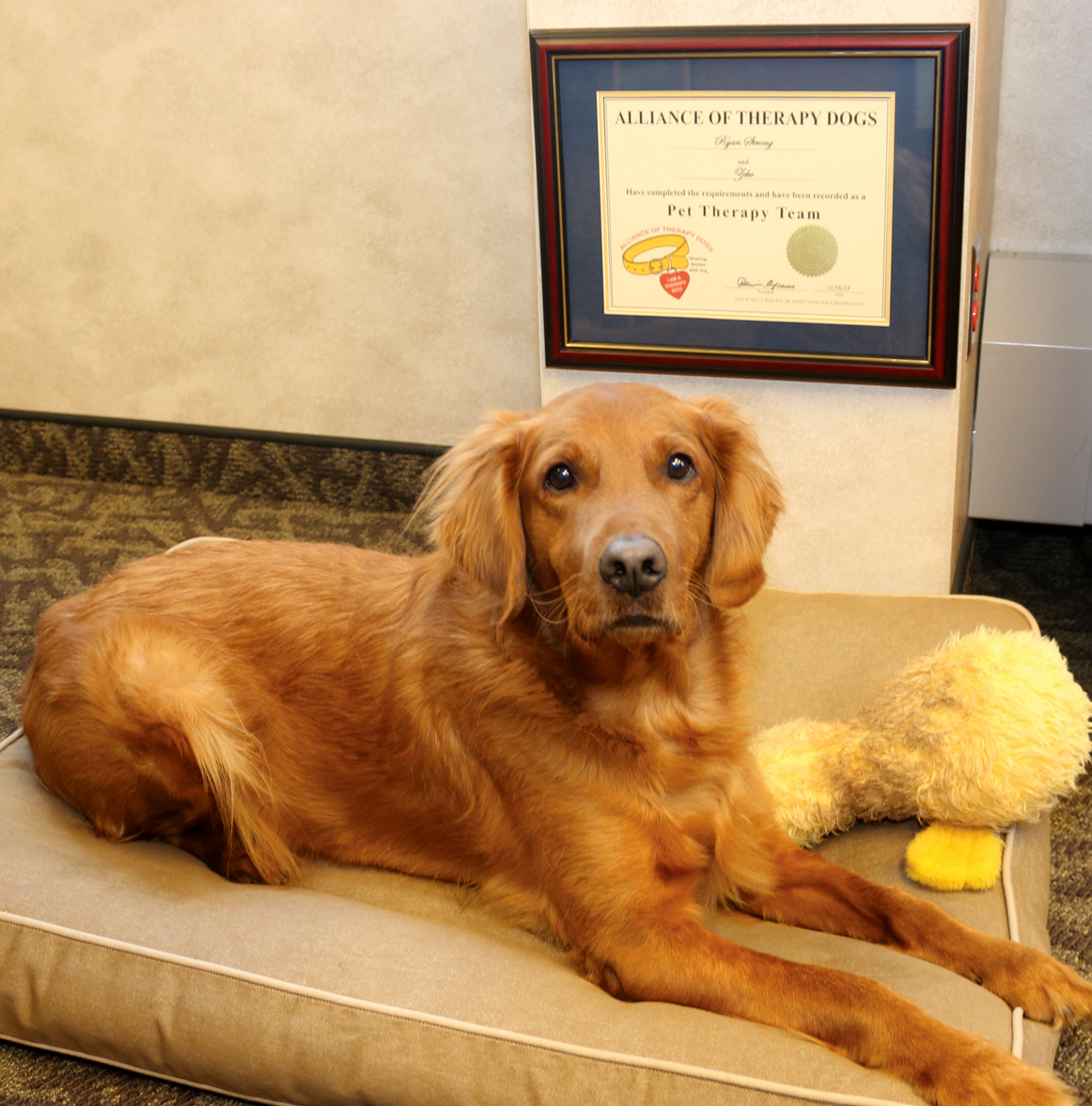 Chief Strong’s dog, Zeke, in his bed at the Wayne Police Department.

By Carolyn Marnon – The newest copper-haired member of the Wayne Police Department is only three years old and does not require a salary. Zeke, a beautifully coated golden retriever, has been working out of the police department since November.
One Friday last fall, Police Chief Ryan Strong brought his dog, Zeke, to the police station to keep him company while some staff had the day off. That also happened to be a day that on-duty police officers had responded to a particularly traumatic call. When they came back to the station, says Chief Strong, they gravitated toward the dog.  Zeke was thrilled with the attention, and the officers were able to have a calming moment with him. It was at that moment that Chief Strong decided to sign Zeke up for classes to become a certified therapy dog. “It’s like my dog got a job!” exclaims Chief Strong.
Since Zeke was already Chief Strong’s dog, he was under the care of a veterinarian and was being fed and cared for. There would be no costs to the City involved in making Zeke a therapy dog. The costs of the training and certification were covered by Chief Strong.
Alliance of Therapy Dogs (ATD) provides support to those who use dogs to visit nursing homes, hospitals, schools and other facilities where a canine can provide smiles and joy to others. According to ATD, therapy dogs can reduce stress and anxiety, provide companionship, and ease loneliness. They help people get through emotionally trying times. A therapy dog does not need specialized training because their only goal is to provide comfort and support. However, a therapy dog does need to have the temperament to be around new people all the time, have good manners, and be friendly. 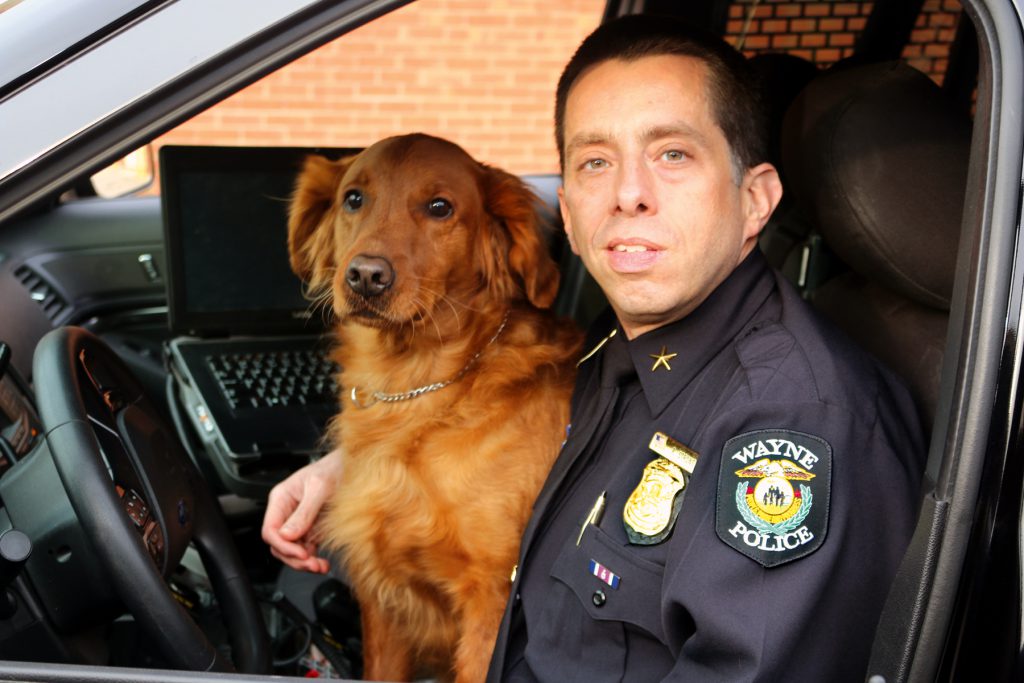 Zeke underwent 24 weeks of obedience training before being given an obedience test. After that, he underwent a series of observations by ATD while visiting various public places, such as a hospital and a psychiatric facility. He was also observed at the police department.
A larger wellness program is being instituted at the police department under the command of Chief Strong. Being a police officer is a very stressful job. Murders, horrible accidents, and seeing people on the worse days of their lives can wear on an officer, especially when these events happen continuously over the career of the officer.  According to the National Alliance on Mental Illness (NAMI), nearly 1 in 4 police officers have thoughts of suicide at some point in their life. In the smallest departments, NAMI says the suicide rate for officers increases to almost 4 times the national average. More officers die by suicide than in the line of duty. Having Zeke in the police station can help provide a form of stress-relief to the officers. This is just one step that Chief Strong has implemented as part of a larger wellness program. In 2020, the department is partnering with Hegira Health who obtained a grant to provide additional wellness programs for the Wayne officers.
Zeke’s Coffee, a family-owned neighborhood small batch coffee roastery in Baltimore, was part of the inspiration for Zeke’s name. Chief Strong loves their coffee. The other part of the inspiration came from Zeke the Wonder Dog who catches frisbees during halftime at Michigan State University football games.
After the holidays, Zeke will head out into the community and start meeting the community for which he now serves. The police department has already received requests for visits from the high school, the courthouse, the dispatch center and a domestic violence shelter. “The community feedback has been overwhelming,” says Chief Strong. “So much positive feedback. People have already stopped into the police department to meet Zeke.” Zeke enjoys the attention he has been getting and sharing golden moments with others. Zeke will be worth more than his weight in golden opportunities to serve the men and women of the Wayne Police Department and the community at large.