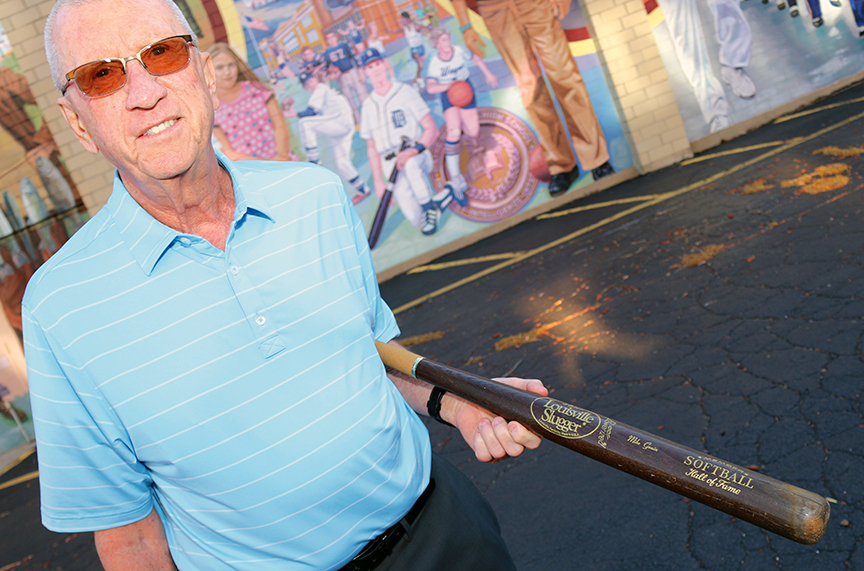 A former professional softball player, Mike Gouin once lived and breathed the game. But his key players—his family—are what always kept him grounded
By Courtney Conover – Softball is a game that’s not for the meek. And it’s a game that brings the noise.
Mike Gouin knows all too well.
Gouin, and his team, the Little Caesars, participated in every Amateur Softball Association (ASA) National Tournament between the years of 1964 to 1974, except for 1968. In 1970, he was voted the National Tournament Most Valuable Player. He then went on to join the ranks of professional softball in 1977 and played for the Detroit Caesars. Gouin and his fellow teammates won two World Championships and were runners-up in another.
In his twenty-year run as an outfielder, Gouin has lived out many of his life’s best experiences on the softball field. His decorated career paved the way for induction into the Metro Detroit American Softball Association Hall of Fame in 1982. Next, in 1989 Gouin was inducted into the National Softball Hall of Fame located in Oklahoma City, OK. He was then inducted into the Wayne Memorial High School Hall of Fame in 1992 for slow-pitch softball.
Now, at the age of 79, Gouin is a husband to Doris, the father of Sheri an accountant and Lori, who serves as The City of Wayne’s Director of Community Development/Planning and Downtown Development Authority, and a grandfather of four. He continues to reside here in Wayne, his hometown, where he has lived since 1950.
On the eve of Father’s Day, The Wayne Dispatch caught up with Gouin, a man who has worn many hats, to talk sports, life, and fatherhood.
Courtney Conover: Could you have imagined that baseball and softball would have taken you where they have?
Mike Gouin: To be honest? No. I was never really the kind of person who dreamed about that. All I know is, that’s all I wanted to do—and I loved it.

CC: Take us back to the beginning. How old were you when you took up baseball? And what intrigued you about the game in the first place?

MG: I had just moved to Wayne, and I was seven years old when I first got a ball in my hands. From that moment on, I absolutely couldn’t get enough. It was in my DNA. And it wasn’t just baseball—it was basketball also. 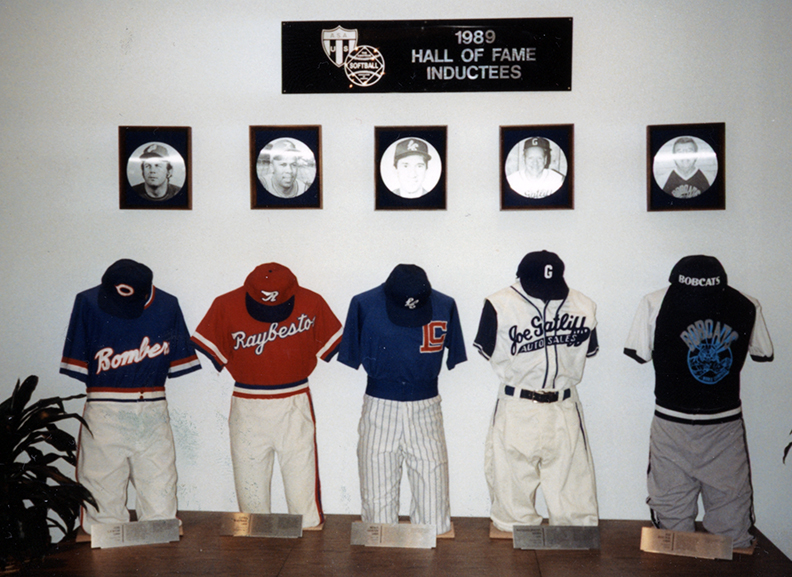 Mike Gouin’s uniform on display at the Softball Hall of Fame.

CC: What provided the momentum to keep playing?
MG: First, because I was reasonably successful, and I was a pretty good athlete, so I had a sense of accomplishment. And that was really fulfilling. The other key thing was the support from my parents. I remember when I was in high school, and I contemplated working in the summertime, and my dad said absolutely not. He said, “I don’t want you to have to do what I did and start working at 14 years old. You need to enjoy your youth.” That gave me the freedom to devote the time needed.

CC: Let’s move on to your years at Wayne Memorial, where you were a member of both the varsity baseball and basketball teams for three years. Share some of your highlights…
MG: In basketball, the first two things that come to mind are…When I was a sophomore, I started out on junior varsity, but after a couple games, they moved me up to varsity. I would have never thought in my life that that would happen. Then, the last game of my junior year, I scored 35 points and, at the time, it was the school record. But it was just one of those games where every shot you take, it just went in. My dad was there, and he wasn’t at a lot of games, which made it special, too. As for baseball, the only thing I think about is that we didn’t even really get outside and practice much before the season started—maybe a day or two before. And we weren’t ready to play. So, yeah, I didn’t have a lot of great memories other than playing with a great bunch of guys.

CC: Then, success followed you right up the road to Eastern Michigan University, where you were voted a captain in both baseball and basketball during your senior year. You were then named All-Conference in baseball in 1964 and 1965—and your batting average for three years at Eastern was .400. How did you balance it all—academic and athletics?
MG: It wasn’t easy. I was also commuting from Wayne the whole time. I think I did more studying on the road trips while I was on the bus than I did any other time. Another key factor in the balancing act was that I got married in the midterm of junior year, and that made a big difference. Eight o’clock you start your classes, then you go right to practice, you get done with practice, and then you come home and it’s seven-thirty or eight o’clock at night. There was not much time to study.

CC: But then, a big change: You begin playing softball during the summer while in college. Why the switch?
MG: At that time, I was married, and I needed to generate some income to help during the summer. Doris was working and trying to support us. So, I was working at that time with the City of Wayne’s Parks and Recreation Department. I would work from eight o’clock in the morning doing different things, and then at night I was running the softball fields, where the games were played in Wayne. I was there until about eleven-thirty at night five days a week. So, the bottom line is, I didn’t have time to play baseball somewhere—I played softball because I could play right there at the field. My wife would run the concession stand while I was playing. 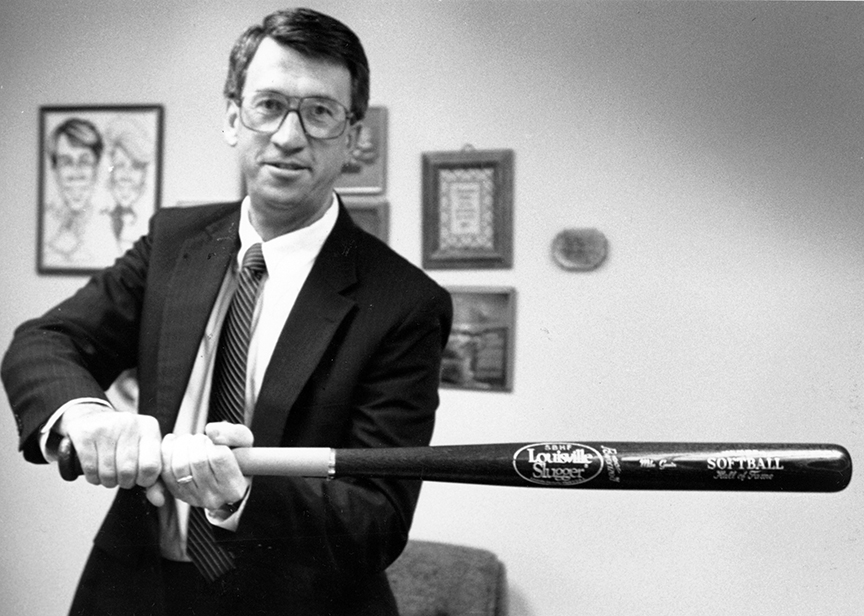 In 1989 Gouin was inducted into the National Softball Hall of Fame located in Oklahoma City, OK.

CC: Let’s get something out of the way for those who may not be familiar with both games: How does softball differ from baseball?
MG: The main difference is that softball is slow-pitch—not fast-pitch. Therefore, you don’t have to worry about not being able to hit a curveball. The other big difference, to me, is that softball has a lot more action, it’s faster, and you have to be a better defensive and more complete player.

CC: How did you get the opportunity to play professionally?
MG: I had been successful playing for the Little Caesars amateur team. When Mike Ilitch formed a team to join the pro league in 1977 I was recruited along with several of my teammates. Mr. Ilitch recruited four players from other states and four former Detroit Tigers, Jim Northrup, Norman Cash, Mickey Stanley and Jim Price.

CC: Which professional softball teams have you’ve played for?
MG: I played for the Detroit Caesars from 1977 through 1979, and then, in 1980, the team became known as the Detroit Auto Kings. And I was the player manager in 1980.

CC: Now, in the midst of all of this, you become a father! Tell me about your family.
MG: I am just so thankful for my wife, Doris—and the kids, Lori and Sheri, who were at most of the games. They mean the world to me. So, it wasn’t like I was away from my family during those times. Even on road-trips, they went on a lot of those. I’m sure people do realize that there are a lot of things that become important in people’s lives, and unfortunately, the most important thing doesn’t always get the time or priority from the father that they should. It’s hard to express what my wife and kids mean to me. Doris had to give up a lot of things [to support my softball career]. Family is the most important thing. When people are on their death bed, they don’t think, I wish I had more money in my checking account or I wish I had a bigger car. No, they think about the people in their life. And when you pass on, there’s nothing else you can do to express your love for the people you care about. We need to do it while we’re here.

CC: As the grandfather of four grandchildren—three grandsons and one granddaughter, what would you say is the pinnacle of having them in your life?
MG: It’s almost like…I never thought I could love anyone as much as my wife and my kids, but my grandkids…I love them every bit as much. 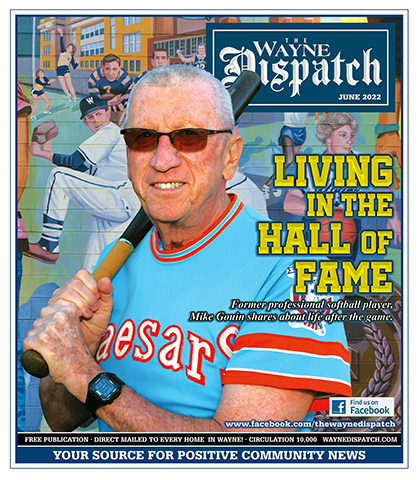 CC: You say that you’ve learned a lot in your latter years of life. How so?
MG: I was 39 when my life changed. I had just retired from playing ball and for the first time, I didn’t have that anchor of sports. And I didn’t think about it that way at the time, but as I look back on it, I always felt something was missing in my life. I didn’t know what it was. I just knew I didn’t feel fulfilled. I had gone to church—I was raised Catholic. But I was like most people: How can you know what’s going to happen after you die. Most people don’t think about that for a myriad of reasons. The bottom line was, I was looking for an answer to spiritual questions. I was born again and immediately repented and surrendered my life to the Lord Jesus Christ. The peace and joy that flooded by soul was indescribable. Our God is an awesome God. I now look at people with the understanding that God created everyone in his image and we are called to love our neighbors as we love ourselves.

CC: How many years have you been married to Doris? What would you say held you two together all these years?
MG: Fifty-eight years. And I’ve got two things: Number one, it’s our faith, and we both have a priority that the Lord is more important to us than anything. But the second thing is that marriage is going to be full of arguments, right? If you marry someone, you’re going to argue. And, sadly, that sometimes escalates to divorce. But the one thing I’ve learned about arguments is that you can’t meet half-way. There’s no middle ground. What you have to realize is that you have to swallow your pride. You don’t need to stand on the mountain over every minor issue in life. You’ve got to be able to humble yourself enough to let it go.

CC: What did family life, ultimately, teach you?
MG: It’s not all about me. Putting others, especially family first is the key to true happiness.