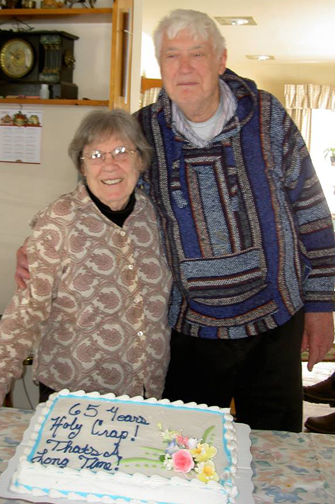 February 9, 2016 marked the 70th wedding anniversary of Henry and Emma Timmermann, both active members of the Wayne Historical Society. They were married in 1946.
Henry was born in Germany.  His parents emigrated to the United States when he was just two years old.  They lived in an area that is now Canton.  When Henry was six, the family moved to Wayne.  They attended the German Lutheran St. John’s Lutheran Church.  The church was located where Tubs and Tumblers is today off Elizabeth St.
During the Depression, Emma’s family moved from Florence, Wisconsin to the Detroit area.  During World War II, her family relocated to Wayne. Emma and her family started attending St. John’s Lutheran Church also.
Henry and Emma met during a young adults outing offered by the church.  After knowing each other about a year and having dated for three months, Henry proposed to Emma.
Emma worked the soda fountain inside Cunningham’s which was located at Venoy and Dorsey.  Henry would drive his old Buick over to see her many times each week after work.  He was a carpenter; he helped build the Wayne Drive-In and many other structures in Wayne County.
After they married, Emma stayed home to raise five children.  Henry worked at the Ford Wixom plant; he retired in 1987.  It took ten years to build the house they currently live in on Manila St. in Westland.
They still attend St. John’s Lutheran Church, but now it’s located by Uht Funeral Home. They are active within the church and volunteer their time among many groups.  They have 18 grandchildren, 28 great-grandchildren and 5 great-great-grandchildren.