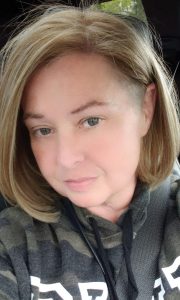 By Sarah Shurge – Purple and pink candles caught the attention of two specific pairs of eyes. Jennifer Bowers watched as her two granddaughters smelled everything they could and pretended to sell candles to each other at the make-believe store they created near Bowers’ Scentsy vendor display.
Bowers has been a vendor for Scentsy for three years due to a deep love for its products, but she claims it has been more difficult finding events for vendors. She was supposed to do an event in Flat Rock last year but it was cancelled due to COVID-19.
The cancellation gave her the idea to organize an event herself. Bowers went to the City of Wayne and got permission to have a vendor show here. It was held on October 4th, at Goudy Park last year. Even though it was a rainy and cold day, a significant amount of people still came out to the event and enjoyed themselves.
“It’s a way to bring something to the city of Wayne again,” said Bowers, a resident of the city of Wayne for over 20 years.
This year will be Bowers fourth year organizing the vendors and the second annual vendor show in Wayne. Since Goudy Park has been under construction, the event will be held at a new location.
The springtime vendor show will be held at Veterans Alley, behind the Wayne Public Library on May 22nd from 11am-4pm.
Come rain or shine – as last year’s rainy vendor show proved – the show will go on. Anyone and everyone is welcome and encouraged to come out and experience the show.
“I’m a little bummed that we had to switch spaces but I’m glad they are fixing Goudy because it needed to be fixed. But I’m excited for the new place. You can see it from Michigan Ave and from Wayne Road, so it’s a great location,” said Bowers.
Precautions are being taken to cope with COVID: masks are required, vendors will have sanitizers at their tables, and tables will be distanced so people aren’t gathering closely.
The event will have a few food trucks and many different vendors, including some that are local. Vendor’s items will span from crafts made by hand to items sold from the businesses they work for.
Bowers has already had 20 vendors turn in their contracts for the show which include: Scentsy, Color Street, Tupperware, Pampered Chef, Toarmina’s Pizza, Great Lakes Confession Mini Donuts, Motor City Meats with Real McCoy Southern BBQ, many local craft vendors and more. She’s hoping to have about 30 vendors total.
Bowers is also involved with the city of Wayne Goodfellows as Vice President of the organization and says Goodfellows will have a tent at the event where donations can be dropped off. The Wayne Goodfellows provide support to less fortunate families including food, toys, and emergency assistance to the residents of Wayne.
A raffle will also take place during the show. Vendors will donate certain items for the raffle. There will be multiple baskets for people to win. Ticket prices for the raffle are still to be determined.