Moe than 60 residents, businesses and City officials kicked it into high gear to identify short-term solutions for Wayne’s financial future. 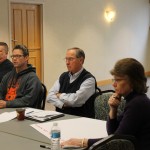 “These sessions were highly productive. They helped our residents and businesses better understand the City’s financial situation, and they became our partners in the process of working toward a solution,” said Interim City Manager Ramzi El-Gharib.

Participants were divided into five groups where they spent nearly an hour and half discussing options the City should consider in the budgeting process. Hot-topics of discussion included the creation of a public safety department, privatizing certain City services, and a new millage request.

“No idea was a bad idea. We were looking for solutions and needed to put all of the cards on the table,” said Councilman Jim Henley.

Participants were asked to continue their role in the process by volunteering to serve on one of several task forces- housing, public safety, millage, and community redevelopment/business.

“We need to continue to keep everyone engaged in this ongoing process and we hope they will remain involved in some form or fashion,” said Mayor Pro Tem Jim Hawley.

Feedback from Session 1 is available on the City’s website, www.ci.wayne.mi.us and Session 2 will be up later this week.

“We will be using all of the information we received from both sessions in our budget deliberations. Every idea will be considered,” said Councilman John Rhaesa.