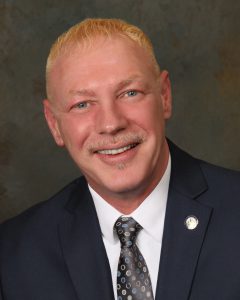 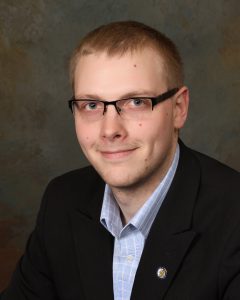 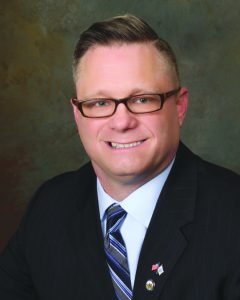 By Carolyn Marnon – In what many residents felt was a bad move, the City Council voted 4-3 to sell the WABC building on Sims Avenue and Wayne Rd. to Paladino Realty Company. However,  5 votes in favor were required to approve the sale of city property. The sale had been pending for the last five months before it was finally brought before the council. Chris Sanders, Ryan Gabriel and Mayor Pro Tem Anthony Miller were the dissenting votes.
Mr. Paladino came before the city council to tell them of how he had acquired the building that now houses Michigan Works when the building was in disrepair.  He fixed it, ran it as a garden shop and as the showroom for Lower Huron Cleaning Supplies for a number of years before selling the property to Michigan Works.  Lower Huron Cleaning Supplies is still in Wayne, located at 5595 Treadwell.  Although Mr. Paladino originally intended to use the WABC property as office space, he recently decided he would like to operate it as a special events center that could be rented while still having a small office space inside.

Mayor Pro Tem Miller commented that he would like to wait and see how the election on November 8 turns out, alluding to the possibility of the Regional Transit Authority millage passing; downtown Wayne is a proposed stop in the transit plan. Perhaps then Wayne could get a higher price for the property.
Councilman Gabriel proposed that the building not be sold, but some type of lease agreement be worked out. At the $150,000 that Mr. Paladino offered for the property, Councilman Gabriel commented that he might want to buy the property at that price.
Councilman Tom Porter pointed out that back in 2010, there was talk that the building was going to be sold.  Nothing ever happened.  Six years later, it is still for sale. Someone has now offered $150,000 to buy the building and get it on the city’s tax rolls.
Commenting on Facebook’s Wayne Neighbors Discussion Board, Jamie Lyn Stanton said, “When you hear the city is hurting for money and then something like this happens, you’ve just got to shake your head.”
“If we don’t get the rail stop, then they shut down a sale that got a city-owned property on the tax books and a perfectly good property to be used,” said Kelly Staley.
Cynthia McClure stated, “They turned down $150,000 and yearly taxes of over $6,000, not to mention no longer having to pay maintenance costs of electric, water, gas, etc. They think they can get more. Really? Have buyers been knocking on the door for the last 6 years? Are we (the City) in such good financial shape that we can wait until a better deal comes along? The City should not be in the business of real estate speculation. We have enough vacant buildings, why turn down an opportunity to fill one? People, Pride and Progress? I think not!”
Alan Bogenschutz said, “I don’t know. Sell while you can because we have heard about a rail thing before and how did that work out for us?  Hello parking structure…
“It sounds like a complete flushing of the toilet needs to be done with our elected officials. Now is not the time to have personal agendas. We have a city to get back up and running!” proclaimed David Koester II.
Former councilman Skip Monit agreed with Mrs. McClure. “We need to accept any decent offer. My experience is that hoping for the better deal costs the city money, and another offer will likely never come.”