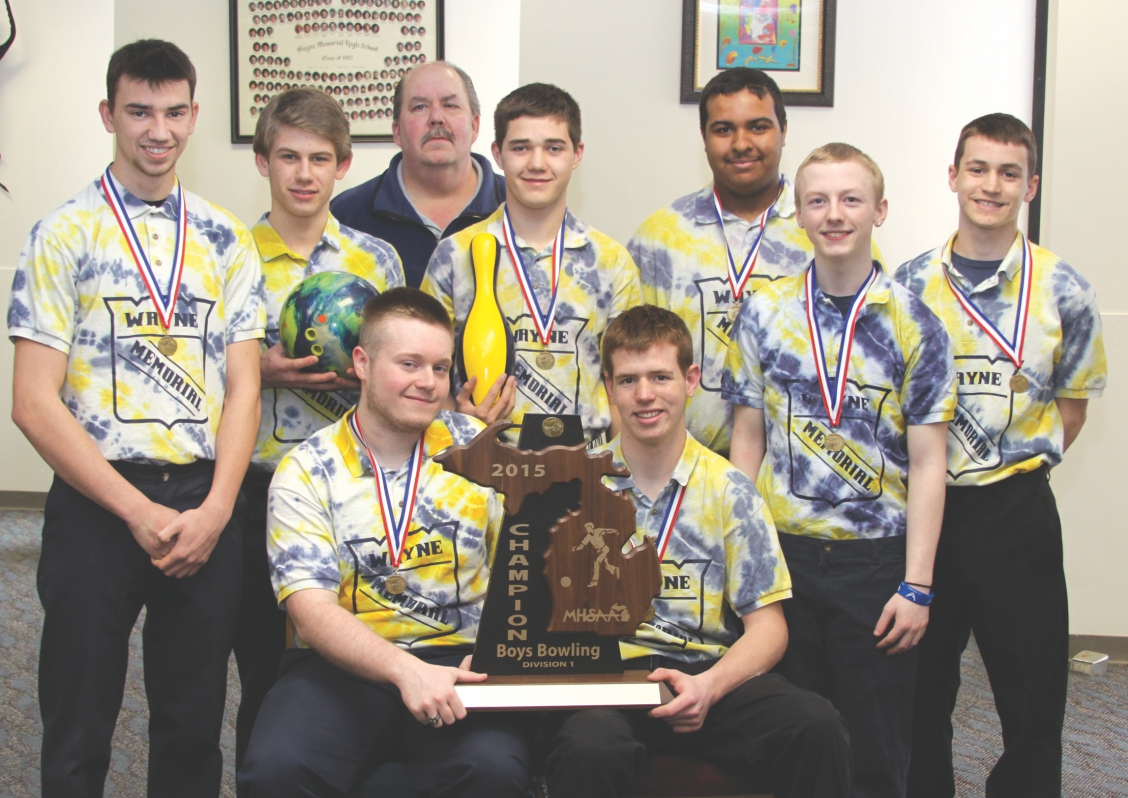 By Samantha Tillman, WMHS sophomore – The Wayne Memorial High School boys bowling team finished with a first place win at the state championship on March 6 and 7, being the first boys’ bowling team to win states in the history of Wayne Memorial.
Coach Bob Jawor (whom the players call “Jaws”) said that the team played strong from the very start of the day, and continued to try and improve, even as the competition was taking place.
Jawor has been the coach for the team since the program started nine years ago, and has only seen one other high finish, in 2009, when the team placed second.
“I couldn’t be prouder of my team,” Jawor said. “I wasn’t really surprised when they won. They all bowled so well.”
The boys were thought to be underdogs by many of the teams who participated in the event, including local rival Canton, who Wayne beat early on in the competition, even though Canton had beat Wayne in every tournament leading up to the championship.
“It started out as a really good day. Our first game was really strong. I shot a 288, and all the other guys did incredible, too,” senior Brandon June said.
The team beat out Saginaw Heritage, a high school known to do well in bowling, 1,281 to 1,228, in the division one final on Friday.
“I knew we had it in us,” June said. “I could see it. Our mindsets were just to get in there and bowl, and that’s exactly what we did.”
Many questioned how the team was going to pull out the first place win with the rocky start of the actual season, not having as good a record as they’d had in the past, but the boys went into the competition with an abundance of confidence.
“We all had moments of greatness,” June said. “So many people had fantastic scores throughout the day, especially Conner (who scored a 231 on the last game).”
The members who took part in the championship match were Ty Weber ‘17, John Willet ‘16, Conner Weber ‘16, Jarret O’Chel ‘15, and Brandon June ‘15, who said the boys often say “live and die with the five,” referring to how they bowl together.
The team members got warm welcomes when arriving back to school, some even getting applause as they went into classrooms.
Willet was applauded when walking into his first hour on Monday morning, and he could not be more satisfied with the way he and his team were able to bring pride to the school.
“It’s something you can’t forget. It can’t be taken away from you. I did it for the seniors and all my other teammates as well,” Willet said.
“When I realized the boys actually did it, it was such a great feeling,” Jawor said. “All their hard work paid off, and they really did earn and deserve that win.”
Though Jawor was very proud of his team, no one was prouder than the bowlers themselves. “It was so unreal,” June said. “Since it’s my last year, it meant so much to me that we’d won. It was our goal since the very start of the season, and it was such an amazing feeling to be able to experience it with my team.”
Coach Jawor said his favorite part about the experience was seeing how happy the guys were when they were given their medals and trophy. “They were so excited. When I knew it was over and that they’d won, it was such a fantastic feeling.”
Though the winning was great, it wasn’t June’s favorite part.
“I just loved spending time with my team,” June said. “I wouldn’t change a thing about that day.”