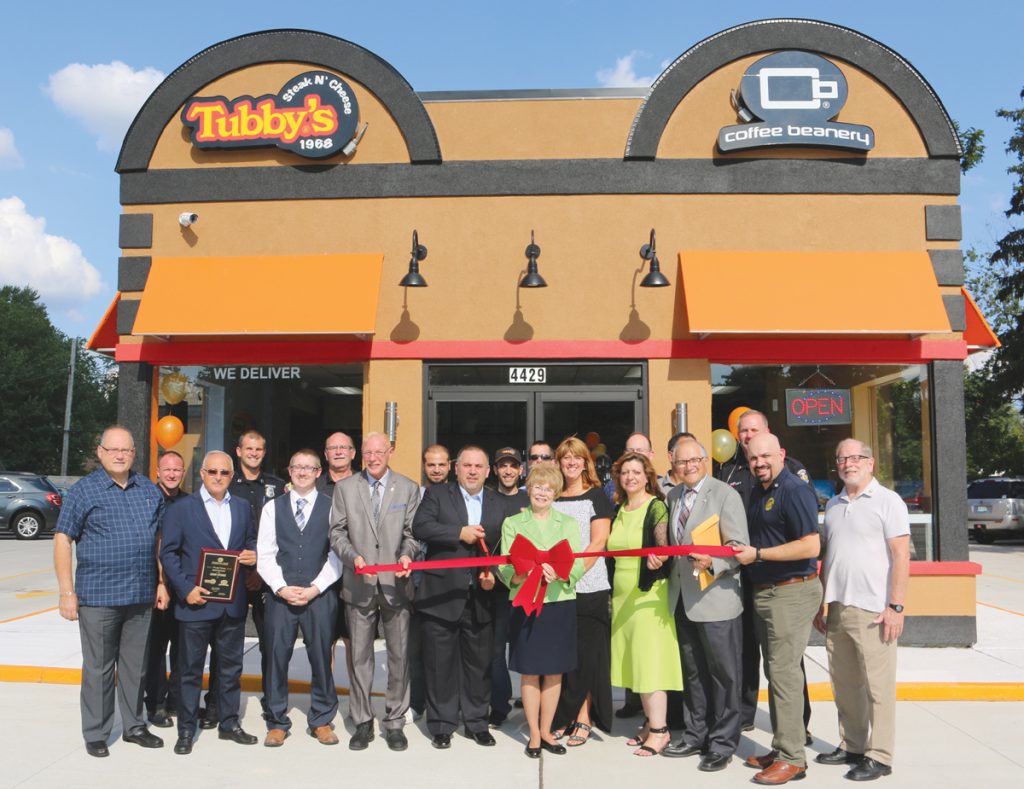 Store owner Fadi Salhab cuts the ribbon at the grand opening of Tubby’s Sub Shops and Coffee Beanery with the Wayne City Council, Wayne Administration and the Wayne Chamber of Commerce.

Tubby’s Sub Shops is on the move, again. The “Detroit Original” sub shop featuring submarine sandwiches “grilled to perfection and made to order,” is making its latest appearance in Wayne County, this time with a new location in downtown Wayne.
The newest Tubby’s is conveniently located at 4429 South Wayne Road in the downtown area and celebrated its Grand Opening on August 15. The ribbon cutting ceremony was attended by local politicians, chamber members and the public who were encouraged to stop by, meet the owners and enjoy Tubby’s samples.
“With all the exciting development activities in Wayne County, we decided that this was the place we wanted to invest with a brand we are proud to represent,” said Fadi Salhab, the store owner. “Tubby’s has a proven track record in metro Detroit and we’re pleased to be part of that on-going tradition.” This is Mr. Salhab’s second Tubby’s restaurant and will offer both drive-thru and dine-in service. “We’re co-located with a Coffee Beanery, meaning that this venue has great food and beverage options for breakfast, lunch and dinner.”
Tubby’s is the 49-year-old franchise operator renowned for its Steak N’ Cheese, Tubby’s Famous and its line-up of dozens of made to order subs, catering items and Monster party subs. As a Detroit Original, Tubby’s was grilling its subs long before it became a national trend to do so. Mr. Salhab said that he’s been a longtime Tubby’s fan and mentions the Steak N’ Cheese as his all-time favorite sandwich.
“Our business model is built on serving quality products with an absolute commitment to customer service,” said Bill Kiryakoza, executive vice president at Tubby’s who overseas franchise development. “In Wayne, we’re thrilled to be partnering with a proven operator at an excellent location to deliver on the Tubby’s promise for Wayne residents and visitors alike.”
Much of Tubby’s recent growth stems from its ‘Tubby’s 201 Plan,’ a comprehensive review and reinvention of the brand. As part of that plan, the company has increased its marketing budget, focused its menus, added exciting limited time offering subs, enhanced catering packages, and increased drive-thru and delivery. Kiryakoza mentioned that a typical Tubby’s store employs 10-20 people in both full and part time positions. To learn more about Tubby’s Grilled Subs and to find the location nearest to you, please visit www.Tubbys.com or follow Tubby’s on Facebook for the latest news.

About Tubby’s Grilled Submarines:
A ‘Detroit Original,’ the first Tubby’s Sub Shop was founded in 1968 by Richard Paganes and was grilling subs long before it became a national trend to do so. Headquartered in Roseville, MI, the franchise has since grown to include 61 locations throughout Michigan with more coming in 2017. Over and above all else, Tubby’s has an unsurpassed commitment to quality and the delivery of premium quality grilled submarines on freshly baked homemade bread. Tubby’s menu offers fresh salads, tasty sides, Monster Party subs and other crowd-pleasing catering options, plus at select locations, a new dessert menu featuring Just Baked cupcakes.