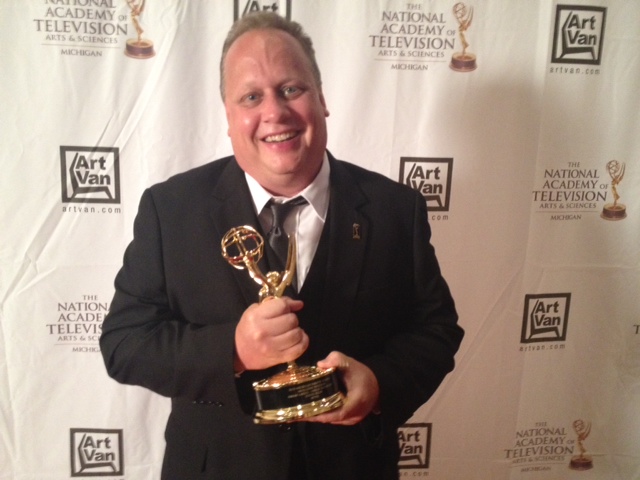 By Jenny Johnson – Wayne has a lot of award winning residents. But this June Steve Julin added an Emmy to that collection. Julin, a Wayne resident and 1985 Wayne Memorial High School alumni won for Best Magazine Show in Michigan.
Great Lakes~Great Tastes is a half hour show that airs on WTVS (PBS). The show focuses on Exploring Michigan’s culinary culture. Each episode features four or five off-the-beaten path food businesses.
From restaurants and bakeries to breweries and dairies Great Lakes~Great Tastes has spent three years highlighting the jewels in Michigan.
“It is a hobby that turned into my career and my passion is in the culinary area,” Julin said. “I cook almost every night and we travel for food shows.”
He and his wife, Sheila’s last great food trip was to Scottsdale, Arizona, where they enjoyed ceviche. This dish is made from fresh raw fish and citrus juices and spices.
Julin is a self-described foodie who enjoys all of the different places his show features. In addition to producing, directing and editing Great Lakes~Great Tastes, he has been Vice President of Education at Specs Howard School of Media Art for the past 24 years.
He is also a graduate of the Media Productions class of the William D. Ford Career Technical Center.
“I think communities need Vo- tech centers. It is unfortunate that other communities don’t have the gem that Vo-tech is,” Julin said.  Vo-tech staff and graduates have parti-cipated in Monsters Inc. and Roger and Me.
“The Vo-tech center is a hands on experience,” he said.

Their Emmy award winning show was filmed in 2013 and featured The Lark restaurant in West Bloomfield; Ackroyd’s Scottish Bakery in Redford Township; Founders Brewery in Grand Rapids; Boss Mouse Cheese in Kingsley; People’s Piergio’s in Detroit and Food Dance in Kalamazoo.
Julin said he and the crew really enjoy visiting all of the different locations and sampling the specialties. It would be nice to make money but it is more about telling the great culinary stories.
“I like that our show is more about storytelling and art. We don’t have a host. The show stands on its own,” he said. “Each segment is its own piece of art.”
Plus they are all foodies.
“It is a bunch of hungry filmmakers that go and do stories about Michigan culinary things,” he said. “We love doing what we do. We have become friends with a lot of people on the show.”
They have a crew of about six and a very small budget. Most of the filming is done at nights and on the weekend and the editing is done at Julin’s kitchen table.
“I am producer, director editor. Editing is my foray. I have written books about it,” he said. “The post production is when I excel.”
They produce one 30-minute show each year. Each segment takes about five to nine hours to film and five to seven days to edit. It takes about four months to go from ideas to delivering the completed show to PBS.
“When we first pitched this to PBS they said it was the best thing to come across their desk,” he said. PBS doesn’t pay for shows. Each show has to come up with their own funding.
The next show will air this fall and will run seven to nine times on the PBS stations across Michigan.
Emmy Winner
In 2012 the show was first nominated for three awards. Julin and his wife were seated up front and ready to take to the stage when his name was called. But he didn’t win.
“This year we were nominated for one. We sat in the back and I didn’t buy a new dress,” said his wife, Sheila.
So when his name was called it took forever to get up to the stage. Presenters were the stars of Reality Show Hard Core Pawn that is filmed in Detroit. They weren’t even sure Julin was in the audience and he did not have a speech prepared.
If they are nominated next year, they are going to follow the same pattern and even ask to stay in the same room at the hotel.
Each year Great Lakes~Great Tastes host a charity dinner to give guests the opportunity to “eat the show.” Participants of the current show will provide some of their special dishes. The proceeds from the dinner go to the Make a Wish Foundation. There have been three charity benefits so far and they have granted two wishes and are about to grant their third.
The 2014 Michigan Flavors Charity dinner will be Oct. 24 at the Great Lakes Culinary Center in Southfield.

Michigan Emmys
Michigan is one of 20 chapters of the National Academy of Television Arts and Sciences that awards regional Emmys. The 2013 Emmys took place at Motor City Sound Board Theater in Detroit and featured news and individual shows from around Michigan. There were 506 entries in 80 categories.  Submissions were based on creativity and execution.
A total of 401 individuals received nominations.
To check out Julin’s award winning show visit www.greatlakesgreattastes.com. For more information on Michigan Flavors Charity Dinner visit www.michiganflavors.com.

Get ready for Scarecrows