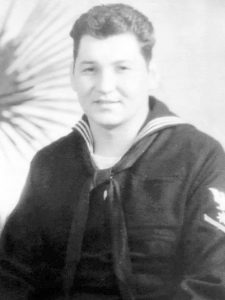 Joseph Henry Fisher age 94 of Coldwater, Michigan, formerly of Wayne, Michigan passedaway peacefully on Tuesday, January 19, 2021, at Masonville Place in Coldwater. He was born in Detroit, Michigan on July 24, 1926. Joseph attended school in Detroit and as a Native American spent his summers on Walpole Island Indian Reservation in Ontario, Canada. He began his high school years at Cass Tech in Detroit and then transferred to Romulus High School where he excelled as an athlete and graduated in 1944. He was a Navy veteran having served in both World War II and the Korean War in the capacity of a Signalman. Joe was an active member and past commander of Amvets Post 171 where he formed and commanded the Post’s Color Guard. Joe was also instrumental in the veterans committee that erected the first Veterans Memorial in Wayne, Michigan. Joe worked for Michigan Bell where he held various positions until his retirement in 1984. In the early sixties Joe worked part time for the City of Wayne Recreation Department. During this time, he served as a referee for youth hockey games, supervised and participated in after school and weekend roller skating, and by far his favorite, supervised the Friday Night Rec activities held at the Attwood pool building; to the teenager attendees he was affectionately known as “Smiley”. He was later recognized by the Wayne Recreation Advisory Board as the recipient of the James J. Poplin Distinguished Service Award. After retirement, Joe and his wife lived between their lake home in Coldwater and their winter home in Ellenton, Florida. Over the years Joe acquired quite an extraordinary collection of autographed photos and letters from prominent athletes. Some of his most prized possessions included letters from Ty Cobb and a personalized signed photo from the Four Horsemen of Notre Dame. A spirited character with a true gift of conversation, he loved to entertain with his stories and jokes. His hobbies included long road trips, shuffleboard, and he was a pro at crossword and sudoku puzzles. Joe was preceded in death by his parents and his high school sweetheart and wife of 70 years Doris Keller Fisher. He is survived by three children, Daniel Fisher (Lou Ann Withington) of Hanover, Michigan, James (Cheryl) Fisher of Coldwater, Michigan, and Patti (Rick) Miller of Dayton, Tennessee, eight grandchildren, Michele Fisher, Melissa Fisher, Leah Fisher, Dena Crow, Byron Halferty, Nicole (Rob) Puckett, Laura (Ken) Oliver, and Valerie (Josh) Floyd, ten great-grandchildren, one great-great grandchild, and many beloved nieces and nephews.
Following his wishes, cremation will take place and services will be announced at a later time.
Burial with Military Honors will be at Fort Custer National Cemetery, Augusta, Michigan.
Condolences may be sent online to www.beamsfuneralhome.com