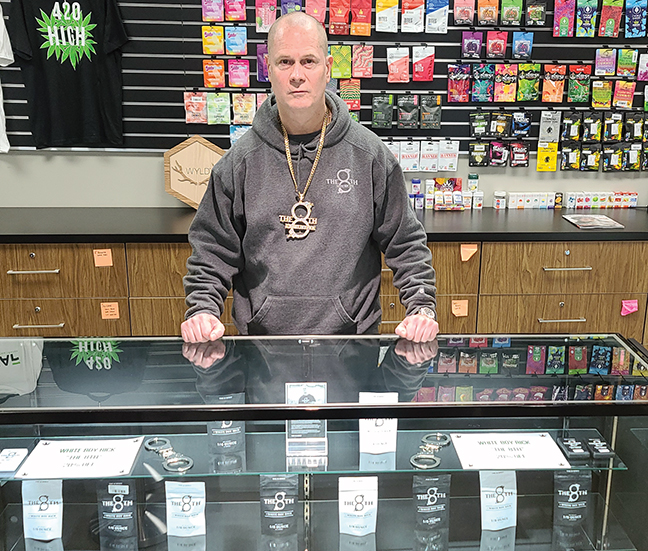 By Sarah Shurge – Picture this: you visit a cannabis dispensary. Recreational marijuana was legalized in Michigan in 2018, so you think nothing of it. Now picture this instead: you’ve spent 32 years in prison for a drug offense, you are the longest-serving nonviolent-offender in Michigan history, you finally get released from prison and visit a cannabis dispensary.
The latter might cause you to stop and think, but there’s a lot more to the story than just that.
On Saturday, February 19th, Richard Wershe Jr. visited Wayne Releaf Provisioning & Cultivation Center. Some of you may not know the story of Rick Wershe, known as “White Boy Rick,” or why he would be visiting Wayne Releaf. To understand why, you need to take a trip back in time.
In the 1980s, at the age of 14, Wershe became the youngest Federal Bureau of Investigation (FBI) informant. When Wershe was 16, the FBI, after having secured 20 convictions through his infiltration of a violent drug gang, ceased to employ him as an informant. In 1987, at the age of 17, Wershe was arrested for possession of 8 kilograms (18 pounds) of cocaine and was sentenced to life in prison under Michigan’s 650-lifer law.
The law mandated an automatic life sentence without parole for carrying at least 650 grams of cocaine. By 1998, the law was rolled back and more than 220 convicts were released. All except Wershe.
On March 31st, 2017, White Boy, a documentary detailing the case of Richard Wershe premiered at the Freep Film Festival and was picked up by Netflix in April 2021.
Publicity about the case in 2017 led to Wershe being paroled, but directly to a prison in Florida to serve another five years for an auto theft conviction from 2008 (crime committed behind bars). In 2019, his application was denied by the Florida clemency board.
On September 14th, 2018, White Boy Rick, a film based on Wershe’s life was released. The film stars Richie Merritt, Matthew McConaughey, Jennifer Jason Leigh, and more.
On July 20th, 2020, Wershe was released from custody in Florida, having completed his sentence with credits for good behavior.
One year after his prison release, in July 2021, Wershe sued the FBI and Detroit police; accusing those responsible for imprisoning him of child abuse. The lawsuit claims Wershe was pressured into assisting police while he was an unsuspecting teen.
In November 2021, Wershe partnered with Michigan-based company Pleasantrees, and launched a cannabis brand called “The 8th.” The brand’s name references the 8th Amendment in the U.S.

Constitution, which prohibits the government from imposing excessive bail, fines, or cruel and unusual punishments.
A press release stated that a portion of sales will be donated to help get the release of wrongfully or excessively imprisoned drug offenders.
In May 2020, Wayne Releaf opened in Wayne at what was formerly known as the Wayne Bowl.
“A bowling alley was the perfect place for it,” said Kim Russo, Owner of Wayne Releaf. “The front half is a dispensary, and the back half is for grow and processing. We’re still in the process of getting that finished. The plans have been submitted to the city. We’re just waiting to hear back.”
Wayne Releaf’s showroom is 7,000-square-feet and carries over 300 different medical marijuana products and over 30 flower strains to choose from.
At the end of December 2021/beginning of January 2022, Wayne Releaf launched Wershe’s cannabis brand “The 8th.”
Each month, Wayne Releaf has Vendor Days, where vendors can come to the dispensary for a few hours and promote their products. It’s a time for vendors to spotlight their product, so generally, they have a table with their product on display, they explain their product, possibly discount their product for that day, and give out free merchandise.
Wayne Releaf normally has about 10 vendors come a month. After launching The 8th, Wayne Releaf management asked Wershe to visit for a Vendor Day.
February 19th, Wershe visited Wayne Releaf to promote his product.
“I think it’s an amazing facility. The transformation that they’ve taken this place from an old bowling alley to what it is now. The things they’re doing in this community. It’s an amazing facility, I’ll be back. I love this place and I hope everybody in the community supports them,” said Wershe.
There was a great turnout for his visit.
“People were happy to see him. People are humbled by his story and have bought a lot of his product,” said Russo. “Some people cried when they saw him because they were so happy for him. I saw women with tears in their eyes.”
The crowd welcomed Wershe, and Wershe did more than just promote his product that day.
“He let people take pictures with him and he spoke to everyone. He was an amazing vendor that really took to his customers and gave them 100 percent,” said Russo.
Talking to customers is an important standard for Wayne Refleaf.
“We see over 500-600 average people on a normal day. We welcome everyone. Our staff is very friendly. We pride ourselves on being so friendly,” said Russo.
Wayne Releaf is located at 36900 Michigan Ave. It is open Monday-Saturday 8 a.m.- 8 p.m. and 9 a.m. – 8 p.m. on Sundays. For more information about Wayne Releaf, you can contact them by email at info@waynereleaf.com, phone at (734)600-0420, or visit their website at waynereleaf.com.