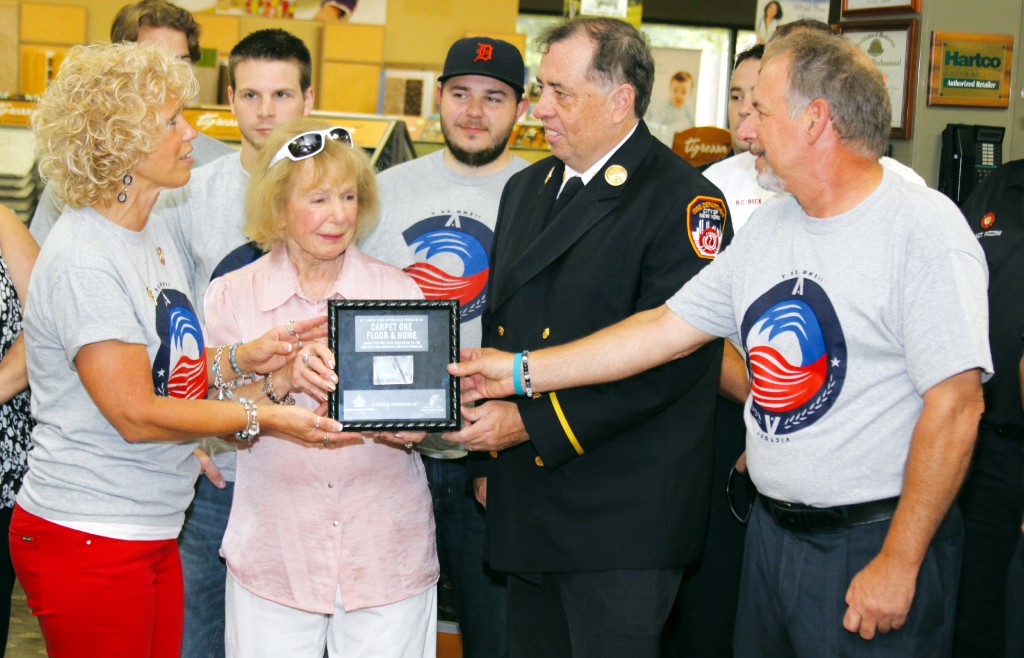 By Carolyn Marnon – Who could imagine running back into New York City to help wherever you can during the horrors of 9/11 and then 14 years later, you are presenting a piece of steel from that wreckage to thank someone for their generous support of the Stephen Siller Tunnel to Towers Foundation’s Building for America’s Bravest program.  On July 1st, retired Battalion Chief Ed Breen did just that.  A specially-designed shadowbox containing 9/11 steel from Ground Zero was presented to Cathy Buchanan, owner of Carpet One in Westland.
Carpet One Floor and Home, along with their manufacturing partner Mohawk, have committed to providing flooring materials and installation for 46 “smart homes” for service members returning from war who have been catastrophically injured.  “We are truly humbled and honored that the Tunnel to Towers Foundation and members of the FDNY-who were actually at Ground Zero on 9/11 and during its aftermath-are traveling all the way from their home base to visit us and express their gratitude to us,” says Cathy. “In fact, we are the ones who are thankful to them for their dedication and service.  That is why we are so thrilled to be part of this impactful program that helps military heroes who have sustained the most devastating injuries.”
The program Cathy refers to is Building for America’s Bravest.  The program raises funds to build custom designed, specially adapted homes for the most catastrophically injured American service members. Each injured service member’s needs are different; the smart home is catered specifically to that member’s needs.  Features available include automated doors and lighting, wider doors and special showers to accommodate wheelchairs, cabinets and counters that can be raised and lowered, and central heating and air conditioning systems that can be controlled by iPads.
In June, Sgt (Ret.) Eric Lund received the keys to his new smart home in Ludington, MI.  In 2012, Eric was deployed to Afghanistan for his first tour of duty.  He recalls being in a Military All-Terrain Vehicle one day that May, but he doesn’t recall hitting the IED that injured him.  He lost his right arm on the scene, and his left arm was amputated the next day.  He also suffered multiple other injuries.  Cathy was at the Welcome Home Ceremony for Sgt. Lund.  After you meet these men “you want to continue learning, to continue helping,” Cathy said.
There will be over 950 Carpet One stores with steel.  Building for America’s Bravest started presenting the steel in April and hopes to get to all the stores within a year.
Chief Ed Breen worked in Tower 2 during 9/11.  He had also been a fire fighter when the World Trade Center was bombed back in 1993.  At that time, he worked at the crater blast.  He now volunteers with BFAB to deliver the steel shadowboxes along with others volunteers.  There is a van they drive from place to place.  When one volunteer is done, he leaves the van in a location for the next volunteer to pick it up and continue on the journey.
Carpet One Westland is selling pins for $5, taking donations of any amount for certain carpet remnants and plans to have a wine tasting and painting event in the fall to continue to help BFAB.  Cathy tells others, “Get involved in your community. You never know when you might need help.” 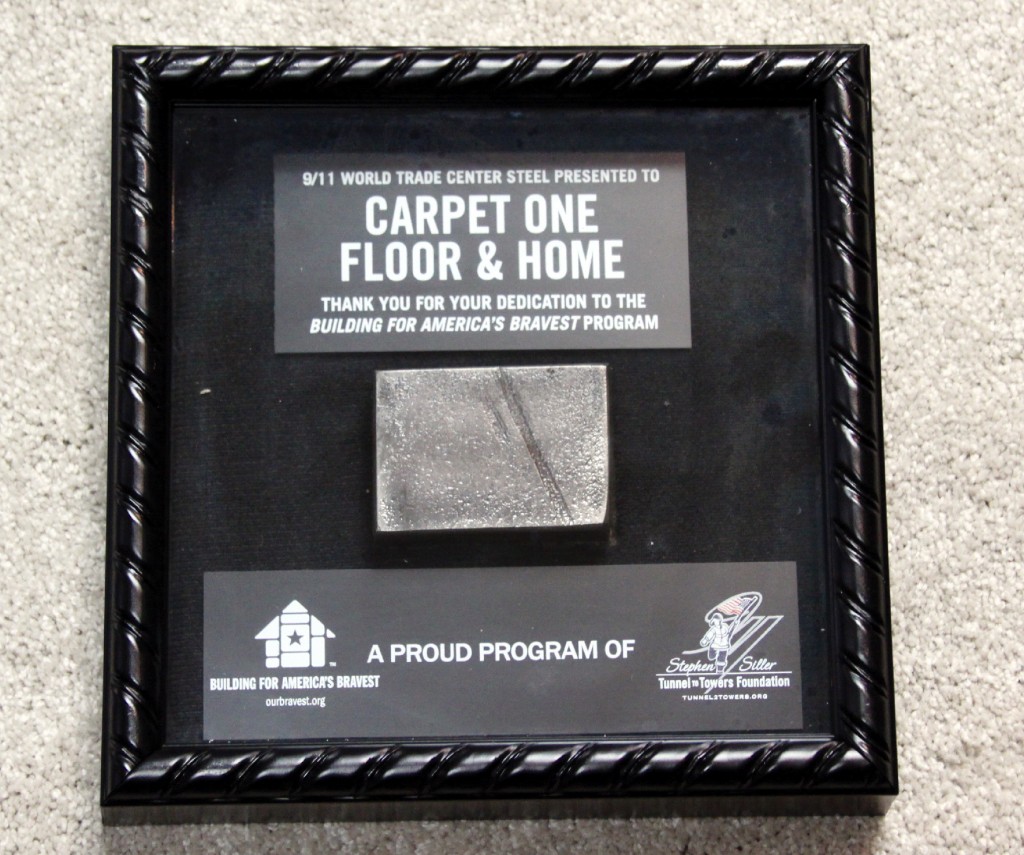 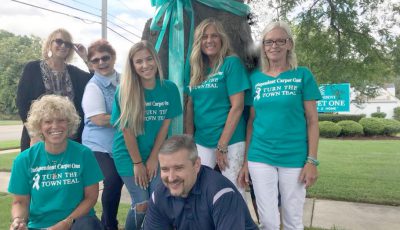