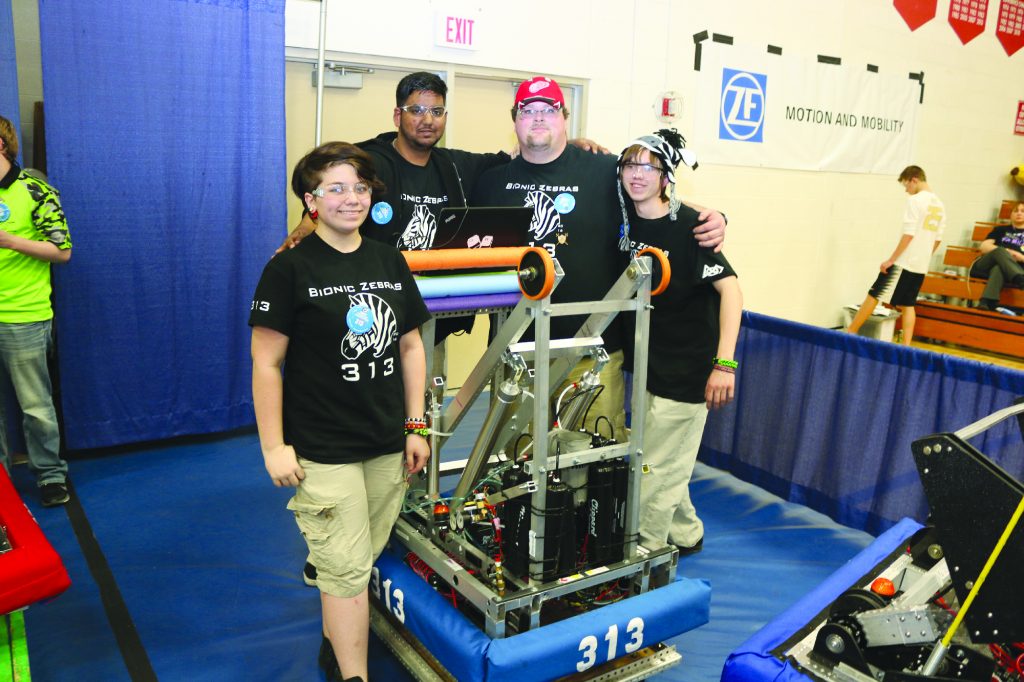 By Carolyn Marnon – They may not be going to the state competition, but they still consider themselves winners. According to team member Oliver Gietzen, “We just finished our 2nd district event last week. We didn’t do too well at Waterford (the first event) and had a lot of issues with things needing repairs at both events, but we got through and made it to eliminations at Livonia (the second event). We were so excited and while we most likely won’t be going to states, we are happy that we did far better than last year and met all of our goals for our robot to accomplish in matches that was in our mission statement this season.”
Wayne Memorial High School’s Bionic Zebras are Team 313 in the FIRST (For Inspiration and Recognition of Science and Technology) Robotics Competition. According to the FIRST Inspires website, “under strict rules, limited resources, and an intense six-week time limit, teams of 20 or more students are challenged to raise funds, design a team “brand,” hone teamwork skills, and build and program industrial-size robots to play a difficult field game against like-minded competitors. It’s as close to real-world engineering as a student can get. Volunteer professional mentors lend their time and talents to guide each team.”
Each year, there is a different game that teams have to design and build their robot for.  The 2016 game was called “First Stronghold” where robots are programmed to break through opposing teams’ fortifications, weaken the opposing tower with boulders, and capture the opponent’s tower.  Robots score points by breaching their opponent’s defenses, scoring goals by getting boulders into the opposing tower and in the final 20 seconds of the round, robots can scale and climb their opponent’s tower.
Joshua Barnett, a mentor of the Bionic Zebras, says this year’s game is semi-medieval. The team had to build the various field elements out of plywood to simulate the obstacles that would be at the competitions.  To make the elements out of the actual competition materials would be too costly.  They only needed to have the simple structures to test their robot on.  Obstacles included rough terrain, ramps, opening gates, getting over drawbridges, and lifting doors.  The more obstacles the team robot can overcome, the more points the team earns.  It is important to weaken the opponent’s tower by throwing boulders at it and even more points are scored if the robot can do a chin up on the tower bar near the end of the round.
The team was founded in 1998 by John Vuchovich and Scott Simons, both no longer with the team. The team is now being mentored by Joshua Barnett and Karl Heinrich.  There are 24 members on the 2016 team.  They are divided into 6 subteams that each have their own role in making the season a success.  The team is 100% student-driven.
The team meets almost every day during the competition season in their own room at Wayne Memorial with a “Robotics” sign over the door.  They compete in two district tournaments of their choosing. Team 313 chose to compete at Waterford and Churchill this year.  There are rules about when the team can actually build the robot, referred to as build season. At the conclusion of build season, they must bag and tag the robot.  They then move into design week where they are transitioning between the build and getting ready for competition.  Then follows an open bag period leading up to the competitions where there is a small window of time to take the robot out of the bag, do any final tweeks, and get the robot back into the bag.
Team 313 ranked 294 out of 411 teams in the FIRST in Michigan District.  They did better than they did last year and were able to make their robot overcome each obstacle at some point in the season.  The team goal was to be able to cross all obstacles and scale the tower.  “We didn’t do them all at the same time, but all of them were done this season so we’re counting it as a win,” said Build Captain, Oliver Gietzen.