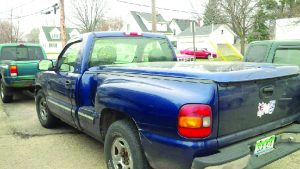 Curt and Deborah Wass had their vehicle returned by Ypsilanti Police after it was stolen.

Carolyn Marnon – You hop into your car one morning and start it up.  Oh no!  You forgot something. You hop out of the car leaving the engine running and run into the house, grab whatever it is you forgot and head back outside, expecting to hop back into your car.  Only what happens when your car has suddenly disappeared?
For thirty years, Deborah Wass of Wayne, has never had a problem with starting a car and leaving it running while it warms up.  At least, not until last month.  Her husband Curt  started their truck up about 9:00 a.m. on Wednesday, March 16.  He realized he forgot his uniform, came back in the house, grabbed it and went back outside.  He came right back inside and said “Honey, call the police” to Deborah.  The truck had disappeared in that brief amount of time. Deborah later learned from her neighbor that police had been in the neighbor’s backyard shining flashlights around at 5-6:00 a.m. that morning.  It was speculated that someone had been hiding in the neighborhood and saw a crime of opportunity.
The officer who responded to the call happened to be the officer of the year, Deborah said. He was there within five minutes. “He was great, very personable,” said Deborah.
Shortly after filing the report, Deborah reached out on Facebook to report what had happened.  Perhaps someone would see their truck somewhere.  No one saw her truck, but she did get a lot of support from others on Facebook and from her neighbors.  The situation opened up many conversations with the neighbors about safety in the neighborhood and about keeping things locked and putting lights on at night.
One week later, on March 23, the Wayne police department called Deborah to say the truck had been recovered in Ypsilanti. A juvenile male had been pulled over for driving a stolen vehicle.  Deborah said the truck only had about a quarter tank of gas in it when it was stolen, so she imagines someone had to have needed to put gas in it at some point.
Deborah had to pay $227 to get her truck back and then dropped it off at K & S Auto Service in Wayne to get it looked at and to make sure it was okay.  She likes working with Ray at K & S. There was a problem with the heat shield and some rattling that was tightened up.  She still is not able to use the truck because she has to wait for the insurance adjudicator to look it over since it was a stolen vehicle.
Luckily, nothing was taken from the car.  However, something was left in the car — a terrible smell that was left behind as part of a week-long joyride.  It will take some time to get rid of that.

Saving lives is their mission, saving their equipment is ours