4th graders reach out to homeless 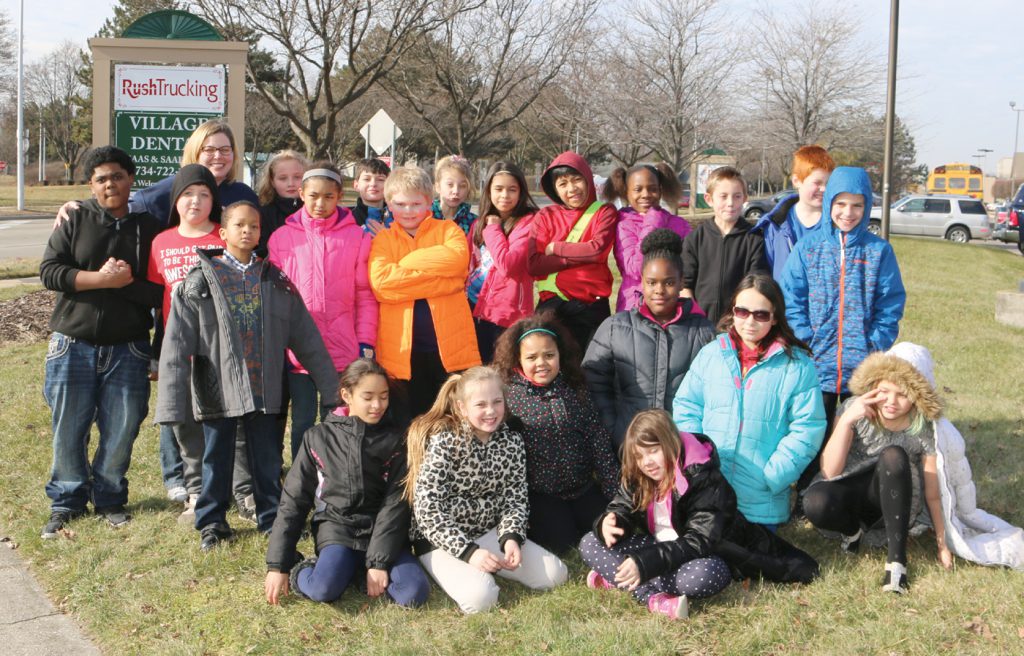 On National Random Acts of Kindness Day Kelly Weber’s 4th grade class of 26 students at Taft-Galloway ventured out to distribute fleece scarves they had made in class through the city. Photo by John P. Rhaesa

By Carolyn Marnon – Friday, February 17, was National Random Acts of Kindness Day, a day that is celebrated by individuals, groups and organizations nationwide to encourage acts of kindness. It also happened to be the day that Kelly Weber’s 4th grade class of 26 students at Taft-Galloway ventured out in 35° temperatures on a field trip to distribute at various spots in Wayne fleece scarves they had made in class.
What led up to this adventure?  “At Christmas time, we were discussing ways to bring joy to others after watching a Kid President Youtube (video) about Joy!    We talked about the men we often see around the McDonald’s on Michigan Avenue and Wayne Road who look like they could use some help.  Through reading some posts on the Wayne Neighbors Discussion Page, I found out that there were many homeless men and women in the area.  We decided as a class we wanted to help.  Then I read an article online about Scarf Bombing and thought we could do that!” says Weber.
It was just a coincidence that the class delivered the scarves on Random Acts of Kindness Day. “I had no idea!  I just really wanted it done before we went on break! It took us a long time to get things rolling and talk to the right people to get a bus. The district covered the cost for us.”
Weber tried to choose spots where she has seen many people out and about such as bus stops and the downtown area.  The first stop was near the Kroger at Merriman and Michigan Ave.  The second stop was at Dynamite Park where the kids walked along the path at Mill Trail Park and tied scarves to the lightposts. There were splotches of ice covering the path, frozen areas of water in the woods and the trees were bare. A purple scarf had a tag, like all the scarves did, saying “Take this scarf if you are cold, and it will help you to be warmer! Love, The Taft-Galloway Tigers.” The third stop was near Michigan Ave and Wayne Rd where scarves were tied near the McDonald’s and near the eastbound Michigan Avenue bus stop where a homeless man had recently died. His death was thought to be caused by the cold although that hasn’t been confirmed. The final stop was at the police station.
The scarves were all made in the classroom by the kids. “They were fairly simple to make and only required cutting,” said Weber. “We are a LEADER in Me school, and we try to instill leadership in everything we do. The kids took the lead and showed each other how to cut the scarves and pushed me everyday to finish our project.” 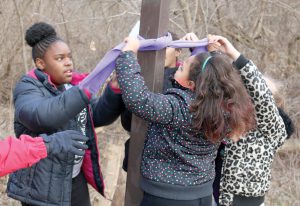 Taft-Galloway students tie fleece scarves to poles on Mill Trail for the homeless. 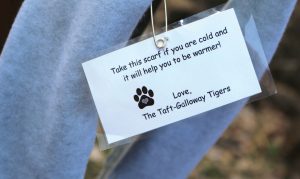 “I love helping others! I wish we could start an afterschool club so we could go out and do nice stuff for people who need things,” said Madison. “It was awesome to help other people,” said Alexis. Mario said, “It was fun to make the scarves and hang them. It made me feel good to help!” “It sounds like I need to start a club now!” said Weber as she listened to her students.
The class also tries to do things in the building. Recently, they made a bulletin board about the 100 reasons they love Taft.
As quoted by author Scott Adams, “Remember there’s no such thing as a small act of kindness. Every act creates a ripple with no logical end.” Let’s hope this ripple started by the kids can turn into a wave of kindness throughout Wayne and beyond.