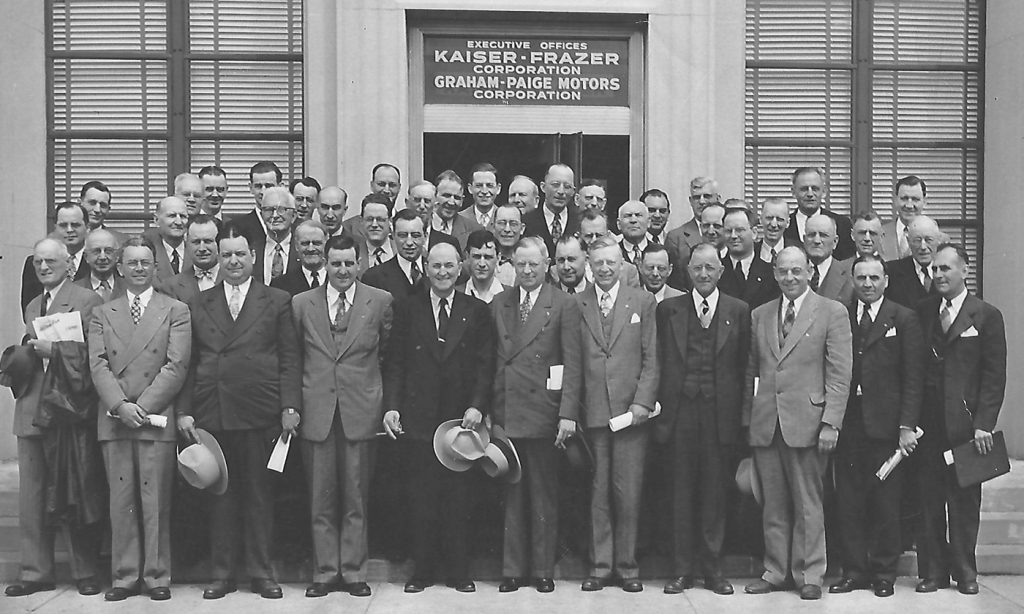 The Rotary Club in front of the Graham-Paige Motors Corporation.

Our community has benefited over the years from these fund raisers. The money Rotary has given to help and support the people of our community has made a real difference in the quality of life for many.  One of the clubs first projects was to build a community swimming pool near the original Wayne High School on Michigan Ave.  It eventually had to be abandoned due to a water shortage.  To name all of the club projects would be impossible.  To name a few: sponsoring Wayne’s traditional Christmas parade for many years, funds to help restore the Rouge River, sponsoring and care of two of Wayne’s community parks, dictionaries presented to all third graders in Wayne area schools, sponsoring exchange students from around the world and providing them with homes while they attended WMHS,  years of scholarship money to graduating Wayne Memorial High School and John Glenn seniors, help for special needs children, opportunities for teens in leadership camps and Interlochen, First Step support, support of homeless shelters, financial support of WMHS Vocal Dimensions, back packs and supplies for Iraqi children,  the purchase of an athletic field scoreboard at WMHS, five years of financial support to the Main Street Program and sponsoring a youth court program at Wayne Memorial High School to educate students on our court systems.
Our Wayne Rotary Club has also been active in working with Rotary International in  improving the lives of people around the world.  Wayne Rotarians gave funds to and traveled to Honduras a number of times to work at building water filters to improve the quality of the water needed in villages as well as build classrooms and orphanages. They support many other Rotary International Programs such as the world wide  eradication of polio and other health issues.
What would Wayne be like today if that small group  of  business men hadn’t banded together to form a club to give service to their community?  In the words of Rotary International President, John F. Germ, “the world is a far, far better place now than it would have been without Rotary.  The world needs Rotary more than ever.  It needs our courage, our optimism, and our idealism. It needs the voice of tolerance, cooperation and hope that Rotary can offer.”
We owe a huge debt to the men and women of Wayne Rotary for their commitment to “service above self”  and all they have given our community. (Material for this article comes from the Wayne Historical Museum.  Thanks to David Carpenter for his help with information.)

4th graders reach out to homeless