A year in review from State Representative Kosowski 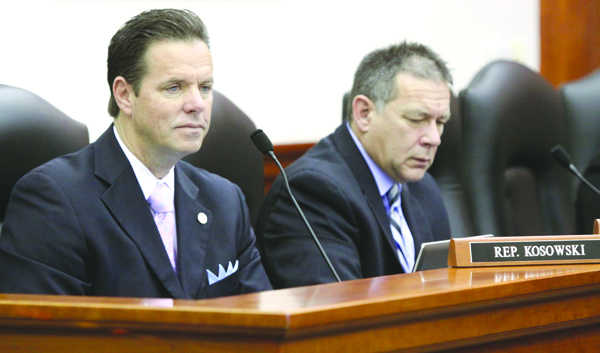 Happy New Year! Looking back at 2013 many great things have been accomplished in Lansing.
Let me start by thanking the great residents of the City of Wayne and Westland for electing me to serve them as their State Representative. There is no greater honor than representing them in Lansing.
The Michigan House of Representatives considered many laws with a vast degree of complexity and origin in 2013. We considered bills ranging from issues involving education all the way to allowing wolf hunting with hundreds of issues in between.
The highlight to me was the passing of Medicaid Expansion. This legislation will give access to health care to an estimated 470,000 low-income Michiganders. This government funded health care program will benefit those with incomes up to 133 percent above the federal poverty level.
It would be hard to speak about every bill, but here is a highlight of a few from this year:
Adopting Common Core standards for education, which are a national set of expectations of what students need to know in order to be career- and college-ready when they leave high school.
A requirement that all public schools possess epinephrine injection devices, known as EpiPens for children who may suffer from allergic reactions.
When purchasing a new car you will only be charged sales tax on the difference between the two vehicles.
Changes to campaign finance laws that double the contribution limits for candidates.  I was a “no vote” and continue to believe that this will not be good for Michigan.
The last bill that I will write about affects the Wayne-Westland School District. Two school districts were dissolved this past year. The dissolution of Buena Vista and Inkster schools required neighboring districts to absorb the students from those districts. While this is relatively new, we will have to wait to see how this plays out. This change impacts many students, teachers, school buildings and equipment.
Thousands of bills are submitted each year and many make it to the House of Representatives. Personally I have had three bills that were voted on this past year. One was recently signed into law a few months ago. It involved the use of certain military experience as the basis for registration; authorize for stationary steam engineers and boiler operators and waive initial license and registration fees for certain veterans. I will continue to search for bills that will assist the many people who have served our great country.
My second bill involves the filing deadline for local ballots. It was just passed by the Senate and is waiting for Governor Snyder’s signature. My third is one that I have been working on for some time. This bill would create a Father Registry to make sure that fathers are notified of all court proceedings involving their child. Having two adopted sons this is very special to me and I believe that it would only assist in the adoption process.
Speaking of bills, if you have a special bill idea please reach me by phone or email. A lot of bills are originated by the constituents of the community. It would be my pleasure to meet with you to discuss any bill idea you may have.
I serve on four committees, including being the Minority Vice Chair on Tourism, Veterans and Military Affairs, also Family Children and Seniors. The fourth committee, Local Government, is the new one for me.  I am looking forward to this new challenge as I am sure it will affect many of us in the Wayne – Westland community. I am also proud to serve as the Minority Assistant WHIP for the Democratic Caucus.
This past August I was selected as the only Democrat to attend the Bowhay Legislative Leadership Development Program. The program was held at the University of Wisconsin with other legislators from South Dakota, North Dakota, Nebraska, Ohio, Minnesota, Illinois, Kansas, Ontario, Manitoba, Saskatchewan and Alberta. The program detailed how to become a better legislator, and I feel that it was an excellent source for me to gain valuable knowledge. The year 2013 has been a great year. I have really enjoyed many of the initiatives that we set up. I was happy with the response we received to my Rep on the Road series. It was a lot of fun going into our school district classrooms and meeting with the students. We were able to set up a mock legislative forum and discuss and debate current issues. In fact, I used many of the great ideas from our young students while I debate and considered bills in committee.
It was also great to see all of the people that came out to our free movie night. More are planned for 2014 along with some other ways to bring the government to you and to keep you updated. I am always open to meeting with constituents and I am willing to set up meetings with groups or individuals. If you are interested in setting up a meeting, please call my office at 1-855-600-2625.
I wish you the very best in 2014!